The United Patriot Front has uploaded a very odd video of some ordinary-looking people going about their day at community radio station 3CR. 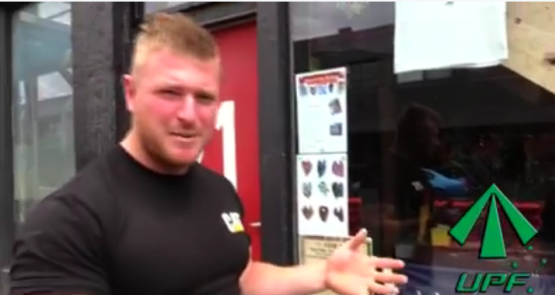 Melbourne community radio station 3CR has accused the United Patriot’s Front of “amateur, schoolyard bullying” and “threatening” behaviour, after the far-right nationalist organisation gained entry to the radio station’s premises and filmed it without permission, then uploaded the video to its Facebook page.

The incident took place last Sunday. The UPF’s video shows several burly men approaching the front door of 3CR to find it shut (as it always is on weekends). A man describes the radio station as a “government-funded radio production company of some sort” (3CR is overwhelmingly funded through memberships and donations). But, he says, “so-called anarchists like to speak on radio here and are given a platform here, which confuses me … So we came here to ask some questions to clear up the confusion.” Once a month, Andy Fleming, a progressive campaigner and anarchist, is involved with a radio program on 3CR, and has been for some years. Fleming, using his online pseudonym of Slack Bastard, is one of the key irritants to the UPF, tracking and reporting their movements and arguing that they are best understood as “fascists”.

After an introduction, the video reveals the men inside the 3CR offices talking to a man, understood to be one of 3CR’s programmers. Meanwhile the UFP member holding a camera walks through the building, filming walls of photos, including close-ups of the faces of those involved in the station, as well as the studios. Tense music plays throughout the video. In the Facebook comments, many applaud the UPF’s initiative and suggest other places the group could “visit”, including  Moreland City Council, which has an anti-racism banner along its front.

Crikey understands one of the 3CR’s programmers opened the door to the UPF members, who had rung the buzzer. “He didn’t really know who they were, but became pretty suspicious,” station manager Marian McKeown told Crikey. The UPF members told him they were there to do some filming, she says. “He’s on crutches. He’s not physically mobile. So he leans across to open door without looking in peephole. Then there’s five big guys in the building — he doesn’t really feel like in a position to create conflict.”

While this isn’t recorded in their video, 3CR says its own CCTV footage shows the men pocketing one of the photos off a photo board.

Given the UPF’s hostility to 3CR and its activities, which include explicit support for progressive politics and of providing a voice to minority groups who aren’t given a voice elsewhere, McKeown says it’s hard to view the incursion as anything but a “very threatening” and “antagonistic” act.

“I think it is about Slack Bastard, but also what 3CR represents,” she said. “It’s about the kind of voices we give airtime to. They clearly have an agenda that is about intimidating those sections of our community. Refugees, Muslims, any kind of leftist who is going to call out their threatening behaviour.”

The same day, the UPF visited the Melbourne Anarchist Club, where a man immediately told them to leave. Their encounter was also filmed and put on the group’s Facebook page.

The UPF has not targeted many media organisations in the past, with the exception of a June protest outside the ABC in Melbourne during the Zaky Mallah saga that involved the group roasting a pig on a spit.

“What was interesting about [their incursion into 3CR is that it] was an escalation of their activities, and of a willingness to confront those they consider their political enemies on their own soil,” Fleming told Crikey. He notes the group’s main base appears to be in Melbourne, though it has made moves in recent months to expand, including through a picket in Bendigo (or “Bendgio“, as they have it) and a planned trip to Perth later this month.

3CR says it is not telling its programmers to change their behaviour, but is warning them to have a heightened sense of awareness. Police were called about the incident, but McKeown sounds pessimistic about their approach to the situation.

“At the time we contacted police. They told us the United Patriot’s Front hadn’t committed an offence. We’re still getting legal advice — we think it’s debatable. And they stole the photograph.”

Crikey contacted the UPF through their Facebook page. We did not hear back by deadline.

It’s gonna be hilarious when they find someone that actually speaks their language back.

It’s certainly a worry when the uninformed, emotional Right begin behaving as if they’re mirror-image copies of the Crikey Land Commissariat Alliance, isn’t it.

What a tiresome bunch of bullies they are.

SuzieQ, you’ve summed up both the Right and Left mob quite well.

They can’t even spell “stray”! Hilarious