News gets its Christmas party back (sorta) ... Abbott? Not ringing a bell .. who is the prime minister? ...

Christmas party watch. Never fear — Victorian News Corp staff do get a Christmas party after all! We had previously reported that News Corp Christmas parties had been cancelled across the country, but an invite to a Christmas picnic at Elisabeth Murdoch’s farm arrived for Victorian scribes this morning. The picnic invite emphasises that families and children (who will get pressies) are invited to the bash, but staff will have to stump up for their own food:

“Adults can sit back, relax and enjoy a picnic with family and friends or wander around the magnificent gardens of Cruden Farm. There are fabulous Food Trucks to purchase food or bring your own meat to cook on the BBQs provided.

The invite covers staff at the Herald and Weekly Times, Victorian Leader papers, the Geelong Advertiser and the News Corp’s Melbourne printing operations. The fine print reveals that while employees are welcome to bring their own children, they’ll have to pay up if they want to bring anyone else’s.

We did say they were trying to keep costs down.

Tony who? Crikey has already reported on the way in which former Prime Minister Tony Abbott’s office ignored freedom of information requests — and now such requests have gone unanswered. Crikey gun reporter Josh Taylor was told that his application could be processed but it was unlikely that the documents could be accessed. Now another FoI request made to the office of Tony Abbott has ended without success. In March academic Scott Bridges requested documents and correspondence between backbencher Andrew Laming and Abbott on the topic of halal certification. His request was acknowledged, but then no correspondence was received until July, when it was refused. A new letter was sent last week, which said the new Prime Minister’s Office doesn’t have the documents requested:

“The change in Prime Minister does not bring your requests to an end.

“However, in reviewing the requests made to the former Prime Minister the new Prime Minister’s office has indicated that they do not have documents that are the subject of your requests (correspondence between the former PM and Mr Andrew Lamming MP).”

It shows a marked change in attitudes between the old PMO and new, with the new office taking a much more pro-active approach.

Dear whatshisname. The media industry’s night of nights, the Walkleys, is coming up next month, and nominated journalists have started to receive their invitations. It’s not without hiccups, though — the Herald Sun‘s Rob Harris received an invite addressed to “Firstname Surnamesurname”. Hope they clear up errors like this by the time they announce the winners. 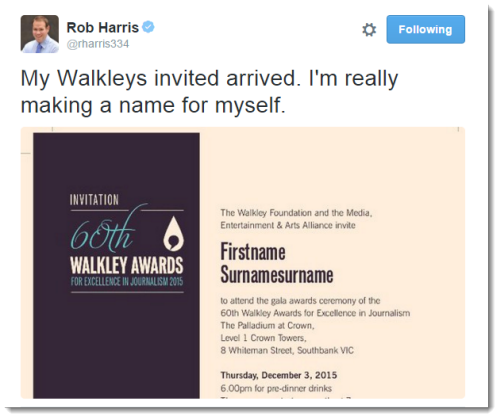 Who is the prime minister, anyway? It’s been reported today that paramedics no longer use the question “who is the prime minister?” to test the mental alertness of patients, as it now seen as too confusing. We can’t blame everyday Australians for not knowing the answer — the Australian Electoral Commission’s website still has Tony Abbott listed as PM:

Josh Frydenberg spotted. Resources Minister Josh Frydenberg has been having a great time in Western Australian this week, checking out mining sites across the Pilbara. A tipster says he saw Frydenberg as he arrived into Perth airport on Wednesday:

“I think I saw City of Melville mayor Russell Aubrey (very pro Perth Freight Link, only mayor that is, so much so in the propaganda they call it the Melville bypass) picking up Josh Frydenberg at the Perth domestic airport around 7pm Wed 4th, or it was their very convincing dopplegangers.”

What a personalised greeting!

ABC (not) in the NT. A tipster from the Northern Territory tells us that the ABC is struggling to broadcast the correct programs across the wide brown land, sending this in at lunchtime yesterday:

“Poor old Aunty is yet again letting us down out here in the sticks. Yet again they’re playing Country Hour (from NSW this time!) on the RN signal in Katherine at 12:05 instead of The World Today.  Last time it went on for well over half an hour (I was out of phone reception, so couldn’t contact them). I called ABC Katherine — no answer.  I called ABC Darwin — they didn’t seem too interested and cut me off and transferred me to a RN number in Sydney which went straight to voicemail.  I then called the Sydney switchboard directly, got put through to someone at ‘Radio reception’ who was slightly interested and languidly told me they’d let ‘them’ know.  The whole process of calling took five minutes — the change back to correct programming took half an hour!”

Are you happy to pay for the PM to go see the Wallabies v All Blacks?

Tips and rumours: papping the boss