If Turnbull really wants a fair tax system, he needs to look beyond GST, writes executive director of the Australia Institute Ben Oquist. 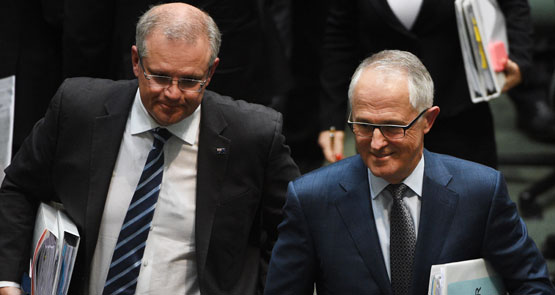 Meanwhile his Treasurer, much of his party and the Business Council of Australia stress that there will be no overall increase in the tax “burden”, and, indeed, that there need to be cuts in personal income tax and maybe company tax as well.

There’s the rub: it is effectively impossible to increase the GST and cut income taxes and keep fairness if the overall tax opportunity (let’s see it as opportunity, not a “burden”) doesn’t increase.

Swapping a progressive tax on income for regressive tax on consumption would itself lead to unfairness — unless the overall compensation package and, more importantly, an increased spending package joined it.

Importantly though, the new PM is not arguing for the traditional conservative position for a decrease in the overall tax take. In fact, no one is. This is a significant defeat for the right in Australia. Sure there is pressure from many not to increase overall taxes but no one is credibly arguing for a decrease. That debate has been won. Indeed even The Australian editorialised yesterday on the need to increase taxes — even if only for the medium term to pay off debt.

The ideologically driven overreach by the right, including the BCA with its commission of audit and the huge long-term cuts that Tony Abbott and Joe Hockey imposed upon the states for health and education, have caused a backlash that has set the right back years. It will be a long time before we have arguments about the need to wind back the state.

But there is an attempt to hold back the tide. The BCA’s Catherine Livingstone warns the PM “we run the risk of undertaking tax mix change that simply underwrites increased spending”.

Malcolm is stuck in the middle. Attempting to frame his future moves with “fairness”, but besieged by members of the hard-right inside and outside his government now worried that the tax debate they started will actually lead to what they want least: a bigger role for government.

But why not a slightly expanded tax-to-GDP ratio for Australia? After all, we have the fourth-lowest rate in the OECD.

The old saying goes, “You can’t tax your way to prosperity.” But, in fact, prosperous nations all have a strong revenue base.

Turnbull said yesterday, as he often does, that we are living at the best time in human history. Indeed, Australia now is one of the richest, most prosperous civilisations to have ever existed. Maintaining such societies now requires a much bigger state than in the centuries of the past. The PM identified the nation’s “big goal”:

“Surely it is that we should continue to be a high-wage, generous social-welfare safety net, first-world economy. A nation that is as fair as it is open to opportunity.”

Just as surely, the next stage of high-wage economic growth will be built on high levels of education, technology development, science and research — all requiring significant government involvement. Then there is fairness — almost by definition requiring additional government resources if it is to be truly realised as more than a slogan.

Australia has big problems right now — rising unemployment, crowded cities, a carbon-intensive energy grid — so where is the evidence that tax reform is the thing we need most?

Unemployment benefits are 38% below the poverty line — is that fair?

Paid parental leave is now a mess — is that fair?

And what about the world’s poor? Foreign Affairs Minister Julie Bishop has overseen the biggest cuts to aid in the history of the Commonwealth. How’s that for fair?

If Australia is genuinely on the hunt for a fair, stable and productive tax reform, we could find one in the capital gains tax discount. It will cost the 2016-17 budget $7.6 billion, and over 80% of the benefit goes to households with the highest 20% of incomes. Closing this tax break wouldn’t need compensation.

Additionally, low income earners would likely benefit from capital gains tax discount reform as it relates to housing prices. Negative gearing often gets more attention when it comes to the housing bubble, but when it was combined with capital gains discount in late 1999, figures show a tipping point that has driven a sharp price spike since.

The big debate is not if we need tax reform. The real question is now how much tax we want to collect. The “mature” debate should include the case for a modest increase in the overall tax take in Australia.

Tax collections in Australia are low, and we know how to collect more and do so fairly. GST is a nice big distraction from all the problems Turnbull is keen to ignore.

State income tax: a political problem in search of an economic solution

Unfortunately the Abbott government spent a lot of time destroying the social contract.

It hardly seems possible to negotiate a changed tax system without rebuilding that social contract.

“…it is effectively impossible to increase the GST and cut income taxes and keep fairness if the overall tax opportunity (let’s see it as opportunity, not a “burden”) doesn’t increase.”

Que? How is it impossible to raise and broaden the GST but cut income taxes only for low income earners?

A change of tone doesn’t mean a change of policy. Malcolm’s there to keep the money rolling in at the top and make sure the poor stay under the rich man’s boot.

Let’s see if the ALP have the guts to come up with a tax policy that takes from the rich and gives to the poor. I think people likeTurnbull and Hockey and Abbott before him spend too much time in salubrious suburbs of Sydney and are completely out of touch. The same can be said of ALP leaders. They all earn much more than most of us.
A trip to FNQ to look at employment black spots like Cairns and Townsville would be a good idea, but they probably wouldn’t ever get out of the Comcar.