Greens at 10 paces. All is not well with the Australian Young Greens, with recently appointed co-convener Sophie Jamieson taking to Facebook to call out her fellow members for “criticism and aggression”. Jamieson writes in the post, which has sparked fierce debate in the group: “I have been met with daily criticism and intimidation. I have been called names … I have taken phonecalls from members in tears about the behaviour of other members.” 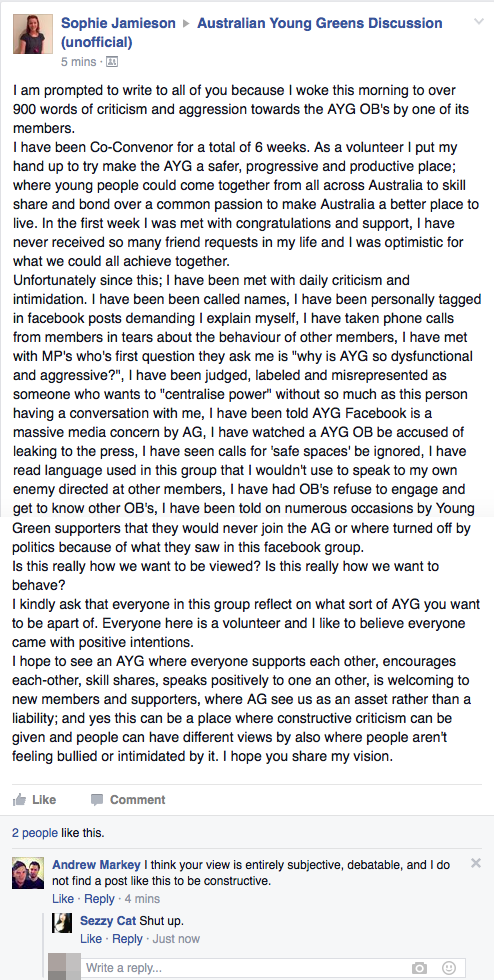 Our source tells us members have been leaving the group, which is described as “dysfunctional” and a “clusterfuck” in one Facebook comment. We contacted Jamieson to find out why she wrote the Facebook post, but did not hear back by deadline.

Oh, the places you’ll go. Speaking of young people in politics, this page from a 1991 edition of Farrago, the student magazine at the University of Melbourne, has appeared online courtesy of the current editors. It features a second-year Peta Credlin making her pitch for student representation. Credlin says she’ll fight against factional infighting and “terse politics” and promises to campaign for improved campus safety and catering. 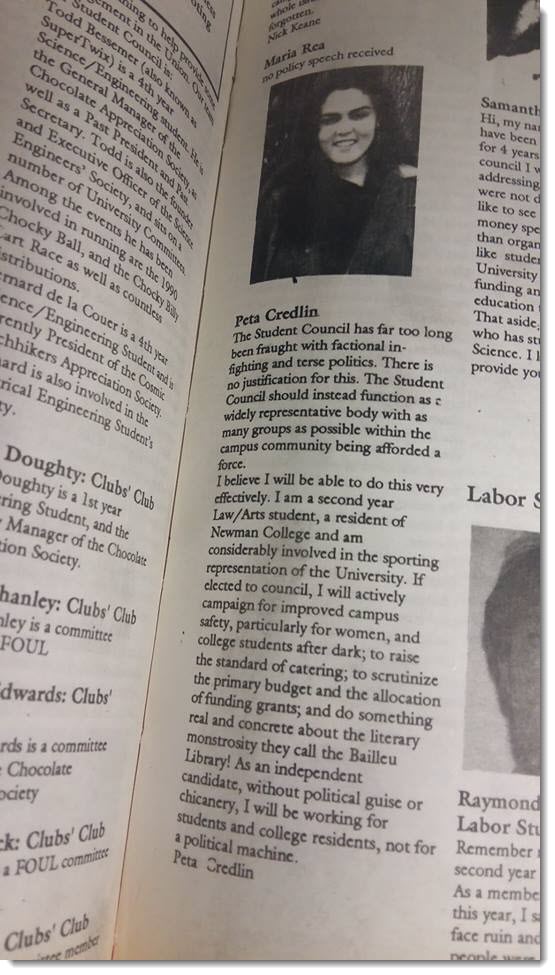 Strangely, she also promises to do something “real and concrete about the literary monstrosity that is the Bailleu (sic) Library”. But what needed to be done? Ms Tips asked a student who was around Melbourne Uni at the same time and was told “either the architecture, which is austere modern, or that the library went all whiz-bang for infotech at some point and sequestered all the books on one of its four floors, exiled the stacks to an offsite location. But anyway she’s using ‘literary’ wrong. How can a building be literary?”

You heard it here first. As predicted by Crikey months ago, Leichhardt Council’s Labor and Liberal councillors have decided to enter merger discussions with neighbouring councils. Leading the merger talks is Leichhardt mayor Darcy Byrne, who is on the staff of federal MP Anthony Albanese, leader of the NSW “hard left” faction.

Back in June Bryne wrote to Crikey vehemently denying that NSW Labor had folded its opposition to Premier Mike Baird’s council amalgamation plan, and he promised an all-out battle for Leichhardt to remain a standalone council.

But announcing talks with neighbouring Ashfield and Marrickville, Byrne said: “We presented a watertight case for Leichhardt to stand alone, but our hand has been forced by IPART [Independent Pricing and Regulatory Tribunal] finding us unfit for the future because our population just isn’t big enough for them.”

On the other hand, local Greens haven’t given up the fight, with NSW Greens convener Hall Greenland saying: “The facts are that the state government has only limited powers to force amalgamations as long as the upper house majority stands firm and councils stay solid.”

The Greens and local community groups will stage a public protest outside Balmain Town Hall this Saturday, November 7.

Tell us more. A tipster in the town of Ceduna, the first area to trial the government’s new cashless welfare card, tells us that the community is feeling ignored by the local council and by Social Services Minister Alan Tudge, who is only coming to consult with locals after the bill was passed. According to our tipster, a meeting with Tudge to take place this weekend has barely been advertised to locals, except for a letter from Ceduna Mayor Allan Suter in today’s West Coast Sentinel:

“On Monday information came into my hands that a meeting was to occur this week end the 7th of November. To date there has been no public advertisement of this. In fact I know the editor (of the local newspaper) first heard reports of this meeting from those who are against the card and provided the local paper with information of this meeting.

“Considering the Sentinel is not printed until Wednesday the 4th ad isn’t available in Ceduna until the 5th, I would say the Community of Ceduna will have two days notice for a major public meeting that will affect many people’s lives. I would think that most reasonable people would consider 2 days notice deplorable in such a matter.”

Despite the late notice, it sounds like activists in the area plan on making a strong turnout to the meeting.

At the end of the Peta Credlin piece you state that “she’s using ‘literary’ wrong”. Might that be “wrongly”?