Rundle: condemning the Cup is a moral atrocity

The Melbourne Cup's importance and pleasure as a cultural activity far outweighs that demerit. 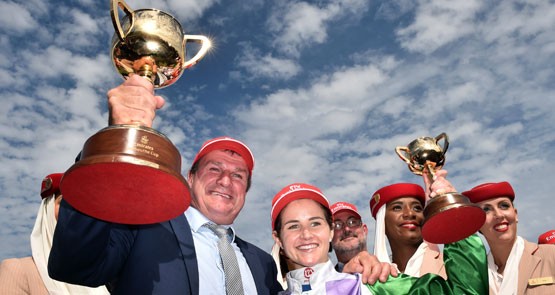 When Prince of Penzance came across the line at a hundred to one, the win/place ticket lodged safely in my wallet, I pondered briefly whether I might claim to have backed it because it was being ridden by the race’s only female jockey, the gutsy Michelle Payne. That wasn’t true, of course. The horse was a six-year-old gelding, a prime age and type for Melbourne Cup winners, and it had perhaps been under-handicapped and was travelling light. Plus, it had drawn the inside barrier, actual No. 1. There was no way it should have been at hundreds, but there it was.

I left it out of a six-horse box trifecta and used it as a long hedge, thinking it might place and help me break even. None of my complex interlocking set of quinellae and trifectae (picked, it should be said, on the same sort of ratiocination as above) even came close, but by then it didn’t matter. Prince of Penzance had come through. Michelle Payne gave a no-holds-barred interview riding back from the post, gulping in breath as she said that people who thought women couldn’t ride could now “get stuffed”. Her account of the race, still on horseback, was intense and focused, and if you think that’s a given, you should hear some of the others.

Her speech at the podium was no less impressive and forceful on the raw deal female jockeys have had for a long time. Surrounded by the tasteless gilt and scarlet of the sponsor and the global rich who have tried to make the race their bauble, Payne, and the ride she gave, affirmed something about the Cup: that no matter how great the attempt to co-opt it, it is still a thing of the people, a res publica.

There then began, on Twitter and elsewhere, one of the funniest, saddest, most absurd multilogues I have yet seen or heard, as thousands of people, who I suppose would in some way call themselves left or progressive, tried to square their admiration for Michelle Payne and Stephen Payne with their hatred of the Melbourne Cup, racing, all it stood for, etc, etc. It was hilarious. They didn’t know what to hate, love, praise, criticise, and the general confusion included in it some people I would class as friends, and very smart people indeed. The race was terrible but a woman won it. The Melbourne Cup is a debauch, but it was a flagship occasion for women in sport blah, blah. The race is cruel, but I really should stop eating red meat eventually, and occasionally turn my thoughts to 10 million African and Asian children dying annually of easily preventable diseases, etc, etc. What the hell was going on here?

Quite a lot. The first is that Michelle Payne appealed so greatly in part because her forthrightness and personal style struck a different note to the way in which such issues get voice in a media and image obsessed political subculture. But of course that forthrightness comes from her profession. Her bravery consists not at its core in fighting sexism in the still quasi-mediaeval racing industry, but in piloting a half-tonne of purposeful animal where she wants it to go. She’s suffered two frightful injuries — one a shattered skull — and her family begged her to quit years ago. She didn’t, for the same reason that other jockeys put up with the disrespect and disdain they get a lot of: the thrill of it is, must be, unique, fusion of human and animal, nature and purpose. And of course, by the lights of those who are up and down about diversity, animal “cruelty” etc, she has practised a great deal of the latter.

Personally I don’t think horse racing is cruel. Horses run in packs spontaneously, they have no reflective self-consciousness or knowledge of death, so the pain of whipping is purely physiological. The billing and cooing over such horses is a false effect of the identity we give them in the cultural institution of horse racing. A pleasurable thing to do, but don’t get all Black Beauty about it.

So I don’t think Payne is guilty of cruelty in any way shape or form. But she’s whipped a lot of horses this way and that in her time, and run them to the point of exhaustion as one needs to do in training and all the other things that are simply part of horse racing. That toughness, that willingness to impose purpose is what shone through in her speech. That’s what people recognised. They recognised it especially because it is so absent in most of the quarters where the people who felt the political triumph of a woman jockey to be the only positive thing — rather than the glory of the race entwined with the triumph of a woman jockey — about the event. The sort of diffidence that characterises such “politics” — whether character X in drama Y or image Z is positive and transgressive or stereotyped and sexist or transphobic or bold free speech or etc, etc — is so entirely bound up in loops and loops of ethical self-examination, and contained within a world of screens and texts, as to suck all will and purpose from the process.

Good god, and how life-denying is the process by which people take more pleasure in a social-political process — welcome though it is — than they do in the collective cultural event of which it is a part. This does seem to mark an increasing trend among the culturati/culture-knowledge-producing class/whatever. The only pleasure capable of being taken at a collective level becomes the advancement of a political ideology (one I agree with, by the way). The moment marks the further departure of a section of such people from the wider culture, a willingness to stand not only apart from it, but to seek mastery over it.

Sadly, ever larger sections of the left appear to be going this way, in some misguided notion that advancing the cause of exploited humanity means extending the moral circle until animals are given some sort of equivalence. That is not only a moral atrocity — “our” animals get the attention that those people overseas do not – but it also marks a retreat from a willingness to develop qualities required in any movement that wants to seek, profess and wield power. Sections of the cultural left have become almost wholly bound up in the super-ego, the conscience, the most life-sapping part of the psyche. No wonder horse-riding appals them, since its rider-and-horse combination mimics and enacts the ego-id combination, the force of desire that does not know itself, steered by conscious purpose, but also steered by it, in absence of the super-ego. That’s what makes it so appealing as a cultural expression going back thousands of years. Excessive concern for animals is often the mark of people who have problems with human empathy and an unwillingness to address them. Since atomisation and disconnection is taking over the whole of the media/culture-knowledge-producer class a virtue of a high-tech world, expect such concerns to grow substantially.

For people who are active against animal cruelty, and the global meat industry — which is a genuinely disturbing vast factory of death, although none of the cattle and pigs have names, so enjoy that transparent prosciutto — a disdain for the race can be respected. But that’s all it should be. On the totem of cruelty to animals it’s a long way down, and its importance and pleasure as a cultural activity far outweighs that demerit. The degree to which it is disdained by an ever-larger section of a certain class is pure cultural snobbery. People who will attend a forest rave where 3000 people are a hot mess on chemicals disdain the Cup because people get drunk (wrong chemicals, apparently), loud, fall around a lot in non-approved ways. That too is simply an exercise in cultural power and domination — trying it on to see if the capacity to dictate approved cultural behaviour can be extended.

So getting cut off from the people and losing the capacity to impose will, or to appreciate the practice of it — not a great strategy for a political movement. The Melbourne Cup is simply one example of that ever-developing trend. It’s worth trying to understand why this matters, and also why there is such a desperate hunger for it as expressed in the appreciation of Michelle Payne’s achievement — and a desire to deny what that achievement actually consists of. What substitutes for that ability to express will among a class obsessed with ethical parsing is, of course, chemical supplementation in the form of anti-depressants and anti-anxiolytics, whose use aboundeth in such circles (and elsewhere, but for different reasons). Will in a pill, for a class that is losing touch with the visceral, the collective and the naturally joyful. A bet on a hiding to nothing, if ever there was one.

The more ways we get together to do stuff the better.It is irritating how so many people just don’t get the importance of events like the Cup, Christmas, Halloween, Mother’s day, New year’s Eve…. that are a part of the social glue. Ritual is what gives life meaning. It provides a link between individuals, groups and communities. What exactly do these people do to celebrate family and community? Do they ever have fun?

Pretty boring life if ritual is what gives it meaning. I’ll take a smile from my daughter for meaning. Horses, beautiful animals, yadda yadda … but there’s nothing exciting about seeing them run.

The other day I was thinking to myself “Is there ANYTHING humanity does that isn’t destroying, exploiting or disadvantaging someone or some thing or some place somewhere?” I feel like I’m being inundated with information from all directions about ways I am contributing to the exploitation of people and animals and ruining the world and I’m over it. I’m a human and I’m going to take up space and resources no matter what.