Junkee's "unconference" brought together hundreds of young Australians with even more excellent ideas. But first, a word from our sponsor ...

Junkee is somewhat novel merger of liberal politics and appealing to a youth audience, while embracing the corporations that want to tap into that market. And its first major conference (or “unconference”) contained that same blend of starry-eyed optimism propped up by plenty of corporate dollars.

Outside of a few sessions set by organisers or sponsors, it was up to the 200 or so delegates to decide what topics they wanted to talk about in a jam-packed Monday in Canberra’s swanky QT hotel.

Junkee bills itself as a pop culture website that doesn’t jump on bandwagons, publish linkbait, or “bitch for the sake of it”. The site often goes after its rivals for not upholding journalistic standards (see this recent criticism of BuzzFeed’s Snapchat story with the Howard-era hardliner Philip Ruddock). But to pay for that, the company embraces numerous corporate partnerships and the growing trend of “partner content”, such as this recent piece on travelling in partnership with Student Flights and Busabout, or this piece about visiting Canberra in association with Junket partner Visit Canberra. The Junkee Media travel website, AWOL, is funded almost entirely through a partnership with Australia’s largest airline, Qantas. The church and state rule still exists, but the line between original journalism and branded content is definitely blurred.

The Junket conference was ultimately the embodiment of Junkee’s ethos, attempting to make a difference in the lives of young people with the help of corporate Australia. In this case, Telstra, Qantas, QT Hotels, and Visit Canberra, among others. Junkee content director Tim Duggan said at the opening of the conference on Sunday that it was, like Junkee itself, an experiment.

The 200 attendees, from a diverse range of backgrounds, including scientists, inventors, engineers, climate change activists, union workers, animal rights activists — and many journalists, writers, and other media — set the agenda. There were more women than men, and white people were definitely not over-represented (as is the case for so many Australian conferences). During two hours of short presentations from attendees, it turned out that well over 100 people had an idea to talk about, but there were only 50 slots to work with (this was expanded to 55).

Monday’s sessions were split out over five one-hour sessions, so each conference goer could attend less than 10% of the whole. Topics ranged from how to make science interesting and get funding for it, to how to unplug for a day, to how to “unfuck the climate”, to how to get more diversity on screen, to how to make 3D printing more accessible.

In between the sessions, at lunch and dinner, the 200 delegates were happy to talk to anyone around them, and the lack of an air of pretension certainly made it much more sociable than other conferences of its kind.

Some sessions were more popular than others, with some groups attracting more than 25 people (the session on introverts had one of the largest attendances), while others had as few as four people. The feedback from the discussions I heard were always positive, though most seemed to amount to the need for more discussion, through the creation of Facebook groups or keeping in touch with people for future plans. Two of the sessions I sat in on were on asylum seekers, and one was on the problems of masculinity in video games. It is perhaps because these particular topics are such fraught territory that no amount of goodwill can immediately result in any meaningful decisions. It is also not surprising that everyone who sat in on these sessions tended to be in furious agreement.

Quite deliberately, attendees’ badges didn’t say where they were from, but it was alarming when, after a lengthy discussion on how to get the public to be more compassionate about asylum seekers, one person introduced herself as an employee of the Australian Federal Police. The AFP’s investigations into leaks concerning the conditions in detention centres seem to lack the requisite compassion.

The Human Library was the best aspects of the event, simply because Junket managed to get US ambassador John Berry to be available to chat to anyone. It was a coup for Junkee, considering Berry doesn’t do much in the way of interviews or public speaking.

Attendees’ experiences seem to be quite varied. Some made new friends, some made good connections, most people had a hangover, while some others didn’t catch many sessions and instead relaxed in their hotel rooms or went exploring in Canberra.

But for all the good vibes that came from Junket, underneath the whole event there was a vague sense of corporate intrusion. Corporations like Telstra and Qantas are increasingly looking at ways to incorporate social responsibility with promoting their products. The corporate dollars are there, and Junkee is willing to take them.

More than once I heard delegates talk about the need for faster broadband. But the reason Australia is so behind on fast broadband? Telstra’s intransigence in upgrading its own networks between 2006 and 2008.

During one of the asylum seeker sessions, it was suggested the Telstra Imaginarium (where people pitch their idea in an elevator ride video that is uploaded to Junkee‘s website) “technology prize pack” could go to giving mobile phones to asylum seekers in detention centres. It underscored the disconnect of a corporate-sponsored event discussing social justice. When push comes to shove, Telstra would never do anything to jeopardise all its lucrative contracts and relationships with the government.

The disconnect was punctuated when immediately before a session on food wastage, we were treated to lunch boxes full of more food than most people I saw could eat. Junkee managing editor Steph Harmon says Junkee will be paying attention to the valid criticism and learning from it as Junket enters its second year next year.

Junket was a great networking event, bringing together an intelligent bunch of people from a diverse range of backgrounds, who seem excited and optimistic to keep working on what they discussed at Junket this year. At the opening someone remarked that cynicism was banned, but a healthy dose of scepticism about corporate interests still goes a long way.

Josh Taylor’s accommodation and meals at Junket were provided by Junkee Media.

More than 100 regional and suburban News Corp titles will no longer be printed under drastic cuts announced today.

The government's media bailout package has been directed at media corporations, ignoring the creative industry and the people who work in it. 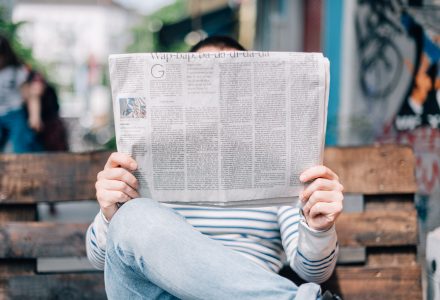 Old news: how young voices are being left out of the media

On an average day, only 1 percent of Australian news stories quoted a young person. No wonder so few trust the media.