Dallas Buyers Club keeps on keeping on. And other media tidbits of the day.

Who paid? Chinese developer Country Garden is expanding into Australia, and, we hear, took a bunch of Australian journalists on a junket to see its headquarters in China.

The outcome of that visit is reported on in both the Oz and the Fin today, with one curious difference. The Australian’s story contains this disclaimer …

The Fin’s, on page 36 of the paper, opens by describing the headquarters of the property developer. It doesn’t contain a disclosure. — Myriam Robin

Boss says Tele took him out of context, Tele hits back. The Daily Telegraph has released the full transcript of its interview with leading jockey Glen Boss, after splashing with his claims that Melbourne Cup winner Michelle Payne might come to regret her comments about the sexist nature of the racing industry.

After waking up to find himself on the front page, Boss took to Twitter: 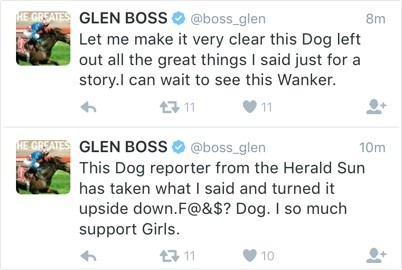 The tweets have since been deleted. Boss also spoke to 3AW’s Neil Mitchell and distanced himself from the comments. “That’s not the whole story. This journalist … angling for a story. And it wasn’t really regarding that. And I had nothing but amazing things to say about Michelle. I’m a massive supporter of her. And any women. … He’s taken whatever I’ve said and just turned it upside down.” He said he hoped “this bloke”, meaning Tele reporter Taylor Auerbach, would write down everything Boss said.

So Auerbach did just that. Shortly after noon, the Tele released the full transcript of the interview, along with the recording. Boss is quoted saying:

“There’s so many pages to this story are now coming to light we know in the industry about Michelle and the things she’s been through to get to this point but now it’s all crawled out in the open for everyone to see I think we should really focus on the real story instead of this bullshit story about women, to be honest it wears very tin [thin?] with me.

“It’s a real victory … and I just think they should be focusing on that and the next thing is they’re saying that there is a division between men and women in racing and it just doesn’t exist. Maybe Michelle has a bee in her bonnet and decided to air it there …

“Yeah a lot of things are said and done and probably she’ll reflect on that in a couple of days and say maybe I could of handled it better, maybe not but Michelle is that type of woman she’s a real strong character that’s why we all love her.”

He also said a lot of nice stuff, about Payne and women in racing more generally, which wasn’t used by the Tele. But isn’t that what always happens in print interviews? — Myriam Robin

Dallas Buyers’ Club lottery. Just when we thought the saga of the Dallas Buyers Club LLC attempting to get the details of alleged pirates from iiNet and other ISPs might be over, it’s back. DBC let its options pass for appealing a decision by the court to withhold account details for alleged pirates unless the company was willing to stump up $600,000 in bond and send letters set by the court alone, but like all good film bad guys, the company just keeps coming back for one last scare.

In yet another hearing in court on Monday, the company  said it was seeking just 10% of the 4726 account holders who might have downloaded the film over peer-to-peer services, and was willing to put up 10% of the bond the court wants, i.e. $60,000.

It’s an attempt to show the court that Voltage Pictures, the film studio, which has no presence in Australia, is not going to take the details and begin sending threatening letters demanding thousands of dollars in compensation like it has overseas. The court hasn’t decided, Justice Nye Perram seems a bit exasperated that the case has not yet finished. The next hearing is scheduled for December 9.

If the orders are approved, the moved will mean those who allegedly downloaded the film have a one-in-ten chance of opening the mailbox to a letter from Dallas Buyers Club demanding payment for a film that has long left the box office, has passed through the DVD rental period, and was recently aired on SBS. — Josh Taylor

Profits? What profits? In releasing what were solid third quarter revenue and profit figures, Time Warner revealed a weak earnings outlook for next year, renewing fears about the inherent weakness in the pay-TV business and sending shares of several media companies lower. At the same time a weak quarterly result from the Murdoch clan’s 21st Century Fox, which featured plunging revenues and profits because of very weak results in its Fox film studios (which ate another impressive quarter for its cable TV news business), added to the renewed concerns about US broadcast media.

Time Warner, which owns cable networks like TBS, TNT and HBO, says it expects adjusted earnings of about US$5.25 a share next year, while analysts were forecasting US$5.60 a share, according to Thomson Reuters. So shares sold off and Time Warner stock fell more than 9% at one stage, and closed off 5%, while 21st Century Fox shares lost 5%, Viacom (owned by Sumner Redstone) dropped more than 5% to continue its year long slide, and Walt Disney shares lost 2% ahead of its much-awaited third-quarter earnings report tonight, our time. Investors will be watching the Disney report for more comments on subscriber growth at ESPN, where it cut 300 jobs last week and dropped several long standing programs and products in a major cost-cutting exercise.

Over at 21st Century Fox, executive chairman Rupert Murdoch was forced to admit that the company had made a very weak start to its 2015-16 financial year. It was one of the worst, if not the worst quarterly performances by Fox since the Murdoch empire was split into two companies in June 2013. Murdoch said the revenue miss in the September quarter was partly due to “challenging comparisons for our film studio due to the timing of key releases, as well as the poor performance of The Fantastic Four”.

Fox’s net profit for the quarter plunged nearly 35% to US$678 million (from more than US$1 billion in the September quarter of 2014-15), on revenues of  US$6.08 billion, down 23%. Analysts thought the revenues would reach US$6.42 billion. Factoring out adjustments tied to Sky and Endemol Shine Group, revenues were down by less — 6.8%.

While advertising did improve at Fox’s cable network programming group, lifting operating income 26% to US$1.31 billion (on a 7% rise in revenue for the unit to US$3.46 billion), the weak performance of the film group undid all of that. Fox’s film unit’s operating income fell sharply to US$149 million, down more than US$300 million from the US$458 million a year earlier. Quarterly revenue fell by nearly US$700 million to US$1.79 billion. — Glenn Dyer

Video of the day. Canadian Prime Minister Justin Trudeau delivers the perfect response to a journalist asking why he chose to have a gender-balanced cabinet. 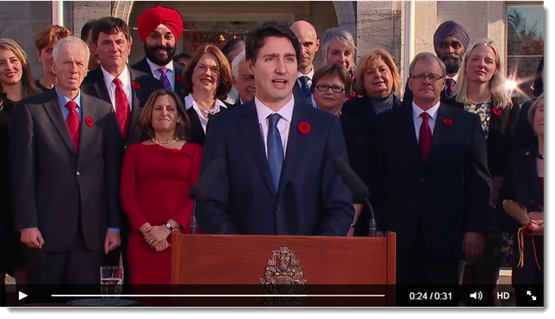 Front pages of the day. News Corp has a very liberal definition of the term “exclusive”, with Melbourne Cup winning jockey Michelle Payne writing “exclusively” for the Daily Tele and the Courier Mail, who have near identical front pages. 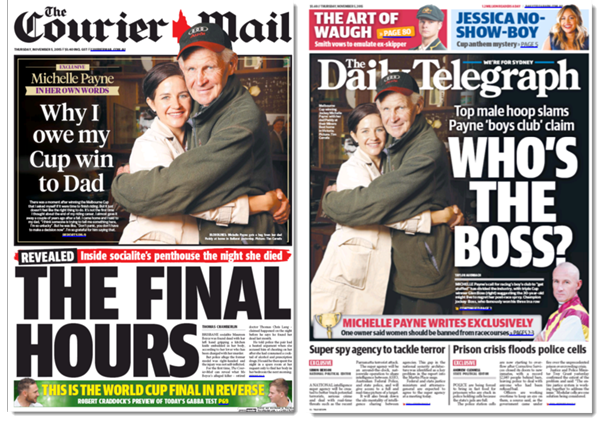 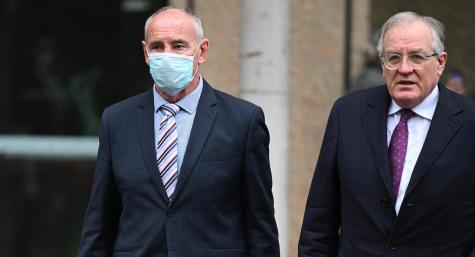