Spies wanted — clairvoyance a plus. It’s been almost a month since the government’s metadata retention policy came into force, and now the government is advertising for analysts to actually work out what all that data means. A tipster sent us this job advertisement for “telecommunications intell analysts”, which requires “telecoms/metadata expertise”. According to the advertisement, the roles are advertised on a “contract/temp” basis, but it also says that a “permanenet transfer” is required. The advertisement is quite a read: 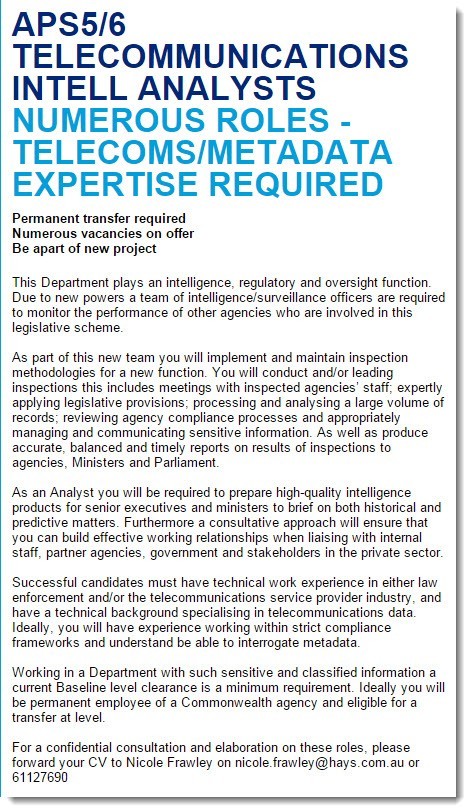 It seems that analysts will not only be asked to look at what metadata shows has happened (e.g. what was on the envelope), but use the metadata to make predictions (e.g. what will be on an envelope in the future): “As an Analyst you will be required to prepare high-quality intelligence products for senior executives and ministers to brief on both historical and predictive matters.”

What exactly do we do? The Victorian Liberal Party’s report dissecting its recent election defeat after just one term in government has some interesting recommendations about how to improve its fortunes in the future, and even takes the time to analyse how the party can combat the Greens’ push on educated middle-class voters. The Liberals not only lost the election to Labor last year, but also lost the seat of Prahran to the Greens. One submission to the report used Maslow’s Hierarchy  of Needs to explain to which needs each party pitches. According to the diagram, the Liberals pitch to physiological needs like breathing, food, water, sex, sleep, homeostasis and excretion, while the ALP appeals to safety, love/belonging and esteem and the Greens appeal to self-actualisation. Which according to the diagram leads to the question “what do we actually do?”. Good luck with that one. 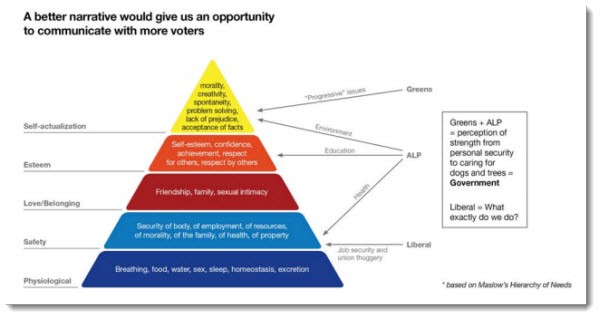 News Scrooge. Yesterday we reported that the scribes at the Herald Sun, the Weekly Times and the Leader newspapers in Melbourne had had their Christmas bash cancelled, apparently because the party budget had been blown at the Hun‘s 25th birthday party last month. Now we hear that parties at all the News publications across the country have been kiboshed. Did the 25th birthday party really drain the coffers for all the parties? Or did Oz‘s fancy gathering blow the budget?

Garrett back at parliament. Former Labor minister, musician and environmental activist Peter Garrett will be holding a book signing of his new memoir, Big Blue Sky, at the Parliament House gift shop this afternoon, an email from the shop announced just this morning. It’s a non-sitting week, and with such short notice, we worry that Garrett may face Campbell Newman-esque lack of demand for his signature. 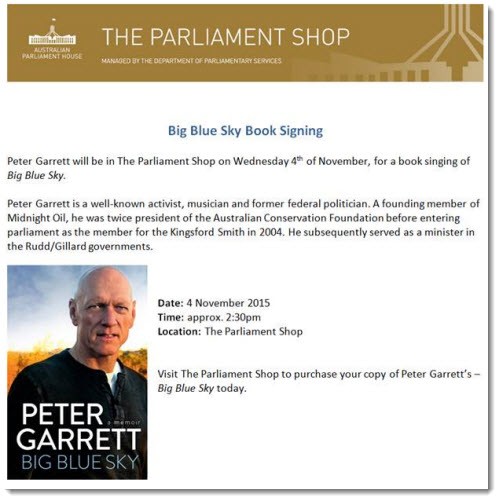 Liberals at 20 paces. A caller to 6PR says that a rift has emerged between the West Australian branch of the Liberal Party and its federal counterpart. According to the caller yesterday WA Premier Colin Barnett refused to show up to an event because Cities Minister Jamie Briggs was going to be there. Know more? Drop us a line.

Love, Google. Tech giant Google is planning on doing more than just dominating the market in search engines, email and advertising — now it wants to start writing our emails for us. According to Gmail’s blog, Gmail will soon have a tool called “Smart Reply”, which can scan the content of messages and pick three of a possible 20,000 common responses to suggest to the email user. The blog said the system had a few kinks at first, like suggesting “I love you” as a response to work emails:

“And much like how Inbox gets better when you report spam, the responses you choose (or don’t choose!) help improve future suggestions. For example, when Smart Reply was tested at Google, a common suggestion in the workplace was ‘I love you.’ Thanks to Googler feedback, Smart Reply is now SFW :)”

Hotline Bill. Opposition leader Bill Shorten is in Kiribati, and for some reason took the opportunity to take part in a dance ceremony with some of the locals. In what looks disturbingly like a scene from Lord Jim, Shorten demonstrates the “turn about” move from the Hokey Pokey. 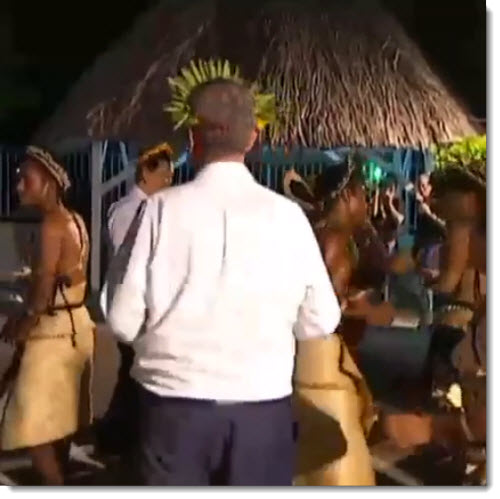 Heard anything that might interest Crikey? Send your tips to [email protected] or use our guaranteed anonymous form

Garrett told the ABC he joined the ALP because after examining the Greens could find not one environmental difference they had made.

Apart from the absurdity of that statement, could someone please tell me one environmental difference Garrett made from the ALP? Remember he couldn’t even get a ban placed on plastic bag.

“You stick your right shiv in,
You take the Left side out.
You put the blade back in
And you twist it all about.
Then do the hokey blokey
And you turn yourself around
That’s what it’s all about ….”

Holy crap that Vic LNP report is hilarious. Replace Labor with LNP and it would (accurately) describe the previous Qld government.

What a pusillanimous poltroon Garrett is – having been royalled screwed when he stood as NDP by Labor exchanging preferences Libs in 1984 he then joined the bastards and proved to be such an embarrassment that I can’t even listen to Oil’s music now.
Once again, a religious delusion, that of adequacy.