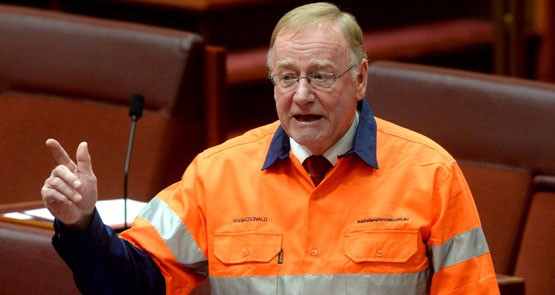 Gone is the prime minister who once suggested climate change was “crap”, but the old guard of climate sceptics still remain within the Coalition to keep the new one in line, at least for now.

CSIRO this morning released a report looking Australians’ attitudes to climate change between 2010 and 2014. Gender, age and education mattered little in a person’s opinion on climate change, but a person’s voting behaviour was found to have a strong correlation.

Ahead of the climate talks in Paris, where pressure will be on Prime Minister Malcolm Turnbull to dump the former prime minister’s policy, just who are the sceptics he has to appease?

Dennis Jensen: Arguably the most prominent and vocal climate sceptic in the Coalition, Jensen went full Godwin the last time then-opposition leader Turnbull attempted to act on climate change, suggesting that sceptics should be listened to:

“Albert Einstein was very much criticised by Hitler, and Hitler actually had a group of 100 top scientists in Germany write a book called ‘100 scientists against Einstein’.”

Six years later Jensen remains a sceptic, and said in July this year that up to 10 MPs were sceptical of the human impact on climate change. He attempted to get the Liberal Party to back a parliamentary inquiry to examine the evidence of climate change before the government announced its 2020 emissions reduction targets. That was unsuccessful.

At the time he said that global average temperature hadn’t warmed as predicted for the last 15 years, and IPCC reports “overstated” warming trends.

Chris Back: WA Liberal Senator Chris Back does believe in the detrimental health impacts of wind farms, but not necessarily accepted climate science. When the carbon tax was repealed, Back claimed that recent bushfires in the Blue Mountains west of Sydney had not been caused by climate change, and that the planet could adapt:

“As a person with some experience in the biological sciences and as a person with some degree of optimism, what I can tell you is that organisms on this planet have always, still are and will always adapt. For example, there has been great dialogue and discussion about the polar bear populations in the Arctic. I recently made it my business to go examine what is happening. I came upon a paper presented only about a month ago — on 11 June in the United Kingdom — by Professor Susan Crockford, herself 35 years an expert in the biology and zoology of polar bears and their evolution. Her conclusion is that there has been no adverse effect as a result of changes in the Arctic Circle.”

Ian Macdonald: Queensland Liberal Senator Ian Macdonald, just two days after Abbott was dumped as prime minister, claimed he “does not enter the debate” on climate change, but told the Senate that children were “being brainwashed” on the subject:

“I have not been a climate change denier. Never have I denied the climate was changing, because, as I repeatedly say, Australia was once covered in ice; of course the climate changes. The centre of Australia was once a rainforest; of course the climate changes. It is something that has been happening since time immemorial. This new theory — I often refer to it as a fad, a farce or a hoax — that suddenly, since the start of the industrial age, that sort of change of climate is happening anew, is just farcical and fanciful. But I do not even enter into that debate.”

Andrew Laming: Laming does not overtly deny climate change is human-induced, but has argued Australia’s impact on it is much lower than other countries’. In a speech during the 2011 carbon tax legislation debate, he compared carbon emissions to peeing in a pool.

“We’re all in a pool together here, it’s an atmosphere just like a pool is. And I’ll tell you what: we’re all peeing in that pool. We all agree it is a problem, we differ a little bit on just how bad for your health it is. But I tell you what, if there is an elephant and there’s a bull peeing in the pool, there is no point in punishing the mouse.”

Laming was also on the record in late 2014 as a strong supporter of the Direct Action policy:

Cory Bernardi: It almost goes without saying that outspoken South Australian conservative MP Cory Bernardi is a climate sceptic. In 2013, Bernardi went on Q&A and stated that the Earth’s climate had always changed:

“I don’t, and I have never bought the alarmist hysteria attached to carbon dioxide as driving climate change. There’s no consensus of scientists, I’m afraid. There’s literally tens of thousands of scientists who have a different view on this. Over the course of time, a lot of the alarmists predictions and forecasts have been proved wrong.”

Barnaby Joyce:  The assumed next leader of the Nationals, and now the minister responsible for agriculture and water policy in Australia, conducted an interview with climate change sceptic Andrew Bolt in May in which he stated that he was sceptical of human impact on the climate:

“I’m just always sceptical of the idea that the way that anybody’s going to change the climate — and I’m just driving in this morning and we’re driving through a frost — is with bureaucrats and taxes. All this does is … it’s a self-fulfilling prophecy. I make you feel guilty so I can get your money and put it in my pocket and send reports backwards and forth to one another.”

George Christensen: Another outspoken backbencher, Christensen told a conference in Las Vegas last year that the claims about climate change were something out of a science fiction film:

“It’s hard to tell the difference between an alarmist claim about global effects and the basic premise of a disaster movie plot. The weather and climate in Australia has not changed in the last century but a new religious interpretation has arisen since then. When we are in a flood, they tell us ‘too much rain is a sign, more hurricanes is a sign, fewer hurricanes is a sign, the sky is blue — it’s a sign. Gravity — it’s a sign’.”

For now, Turnbull appears not for turning on his party’s policy, and potentially risking a repeat of 2009. At the appointment of the new chief scientist, Dr Alan Finkel, who wants Australia to get to zero emissions, Turnbull deflected questioning on whether an emissions trading scheme would return:

“What is the object in terms of global warming? The object is to reduce emissions. What are the mechanisms that you can use to do that? There are plenty of them — from regulatory to trading schemes and lots of different things in between. You use whatever does the job most effectively, at the time, in the market. And the same is true clearly with energy. What do we want? We want everybody to have access to lots of energy, as much energy as they need, as cheaply as they can, particularly in markets and countries that are energy poor. What are the means we use to do that?

Whatever does the best job at the time. So take the ideology out of this and you will make much more rational policy decisions.”

PM says “The object is to reduce emissions”, but that’s not according to the Chief Scientist: we must zeroise emissions. Emissions must be eliminated.

An ETS would give industries rights to emit, and allow the emitters to trade in the rights. Instead we should be providing alternative non-carbon power while taxing carbon, and eventually criminalising emissions.

Why is the Government spending billions on a “Direct Inaction” plan that won’t work to address a problem, anthropogenic global warming, that most of its base and its representative don’t believe exists? Could it be to pretend to address the problem so that people concerned about global warming can vote LNP with a clear conscience?

There is no way that these politicians got into Parliament on merit. They are behaving stupidly in the most destructive possible way. They are hindering the wellbeing of the planet by giving ignorant, lazy, selfish and greedy people, like themselves, opportunity to deny scientific facts. These people argue that it is costing too much money to reduce pollution in the atmosphere without considering the terrible price of doing nothing. They complain that windfarms and photovoltaic cells make people sick and are eye-sores. There is absolutely no evidence whatever that windfarms cause any kind of sickness and eye-sores are everywhere – roads, cars, high-rise buildings, houses, factories, sheds, water tanks, fences, footpaths, power stations, coal mines, electricity poles and wires, trams, buses, trains, railway lines, chook farms, feedlots, forest logging, cemeteries, churches, hospitals, tennis courts, dog races, and most of all – people, armed people in particular are far worse eyesores. We are all blots on the landscape and we must decide what blots we can live with and windfarms must have high priority over others at this point in time.