Media briefs: listen to your heart … race a ratings hit … cop at cup cops it …

Hearts or stars? And other media tidbits of the day.

Heart’s on fire. This morning, Twitter announced it was changing its “favourite” star icon to a love heart “like” button. And of course the twitterati have many thoughts.

Twitter announced the change with the claim “You can say a lot with a heart”. You certainly can, particularly if you want to get into “likes” but not the dicey copyright area of thumbs-ups. But what does it all mean?

The Sydney Morning Herald says many twits have responded to the change with snark — though fret not, as “one defiant Twitter user had already made an extension that turns the hearts back into stars”. Heart for that. But the extension’s limited use means it’s more of a gesture than a practical solution. Unheart. 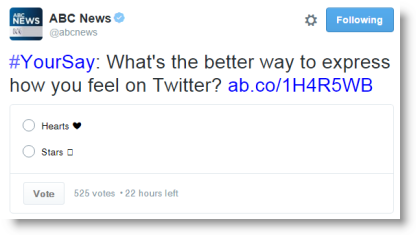 Of course, you can heart the poll, but you may no longer star it.

“Twitter has cruelly stripped away all of the above nuances of communication by replacing the favourite function with a ‘like’ button. Unlike. How, now, is one supposed to bookmark an article on the refugee crisis without ‘liking’ it? I’m not ready to inaccurately look — ironically — heartless on social media.”

We will leave you with sci-fi author and Twitter wag John Scalzi, and we hope to not write of various coloured pixels on Twitter’s interface again:

Race that stops the nation. Yesterday’s historic win in the Melbourne Cup by Michelle Payne and her horse Prince of Penzance was not the only bit of history made. Her win was the stuff sports writers and TV producers yearn for — a rags-to-riches, battler’s victory by an underdog. But there was more and it will set the digital and broadcast TV worlds alight.

Seven used its long broadcast of the Melbourne Cup carnival from Flemington to start the live streaming of all its free-to-air channels, led by the main channel, where the racing was broadcast. A total of 2.931 million people watched the win by Payne and Prince of Penzance just after 3pm in locations measured by the Oztam ratings system. But Seven and Yahoo said this morning there were a further 342,000 live concurrent streams of the race itself to various devices. That makes a total viewing audience of 3.27 million people.

Of the live measured Oztam figure of 2.031 million across the country, 2.068 million were in the metro markets and a further 863,000 were in the regions. You can say that the Oztam figures only give a hint of the size of the audience — as they do for major events such as the AFL and NRL grand finals (and a lot of other sport). — Glenn Dyer

Sky’s cost-cutting pays off. Sky News, the major asset of the Australian News Channel (one-third owned by each of Seven, Nine and Sky of London) enjoyed a sharp boost in profits in the year to June 30. The recently released 2014-15 annual report from Nine Entertainment Co reveals a 21.7% increase in the distribution to Nine from Australian News Channel to $2.33 million, from just over $1.9 million the year before. That’s an implied distribution to Seven and Sky News in London of just of $7 million, from $5.7 million in 2013-14. We have no way of knowing whether the distribution was 100% of earnings, or a lower figure. It’s obvious that the almost constant cost paring in 2014-15 by Sky News management, led by CEO, Angelo Frangopoulos have paid off for the shareholders.

In the 2013-14 accounts Nine said in the notes to the accounts that its 33.3% stake in Australian News Channel was worth $32.07 million, up from $31.16 million the year before valuing Sky news at close to $100 million). But in this year Nine took an axe to that figure in the great big accounts clean up earlier in the year when goodwill and the value of the TV licences in Nine and its main subsidiary, NBN (operators of the Nine station in the Newcastle and Hunter Valley region) were slashed. Included in that house-cleaning was a whack given to the value of the stake in Australian News Channel of $25 million.

In other words, the value of Sky news has fallen sharply because News Corp wants to buy Sky News, and, failing that, has hinted very strongly that it could start its own version and take the carriage contract Australian News currently has with Foxtel in 2017. The attempt by News was resisted by shareholders in the Australian News Channel, with Nine said to be the main holdout because of the high value in the accounts. Now that has been cut to less than $10 million, but there has been no reported movement in the stand-off. Perhaps it might come shortly though with some suggestions of movement on the issue and a management change about to happen at Nine, possibly at the AGM later this month.

Meanwhile the Nine accounts reveal two other interesting figures — loans of $16.6 million in the year to June to the Stan video-streaming service co-owned with Fairfax Media — implying an investment of well over $30 million. And a loan of $3.5 million to the Daily Mail Australia which is 50% owned by Nine. That was up sharply from the $926,000 in 2013-14. The Daily Mail Australia operates the Mail Online website in Australia. — Glenn Dyer

Video of the day. A police officer on his phone at the Melbourne Cup gets more than he bargained for from an aggressive punter. 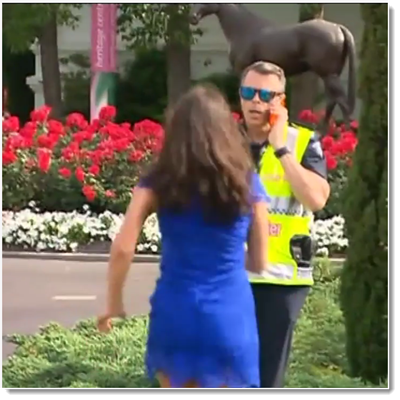