Horse racing and politics dominated the media conversation this week.

Former Prime Minister Tony Abbott — back into second place on our top 20 — addressed the second annual Margaret Thatcher lecture in London last week, copping flak for quoting the Bible to justify closing more countries’ borders to refugees. The federal government — PM Malcolm Turnbull included — focussed instead on rumours Kyrgyzstan was being considered as an option to resettle refugees from Nauru and Manus Island, following reports only four asylum seekers have been resettled in Cambodia so far after a $40 million deal. Immigration Minister Peter Dutton, up six places this week into fifth, gave out the first refugee visas granted under Australia’s temporarily-expanded resettlement program for people from Syria and Iraq.

Tax reform is also, as always, “on the table” according to the PM, with a rise of the GST up to 15% looking more and more possible, but Treasurer Scott Morrison down two places this week into sixth. Shadow Treasurer Chris Bowen enters the second half of the index, calling for Turnbull to be more honest about his intentions and claiming that the general cost of living had risen 30% since 2005. Bowen also attempted to link the known “captain’s pick” by Abbott to introduce Knights and Dames with the current PM, which Turnbull promptly scrapped over the weekend.

Foreign Minister Julie Bishop is up three places this week into fourth after reports the government was considering cloud-stored passports, and following her vocal support for same-sex marriage and a plebiscite. Environment Minister Greg Hunt, up 17 places this week, joined Turnbull in introducing our new Chief Scientist Alan Finkel and raising the possibility of moving towards nuclear power. At the same press conference, Turnbull said if we were to stop exporting coal our buyers would just “go somewhere else”. 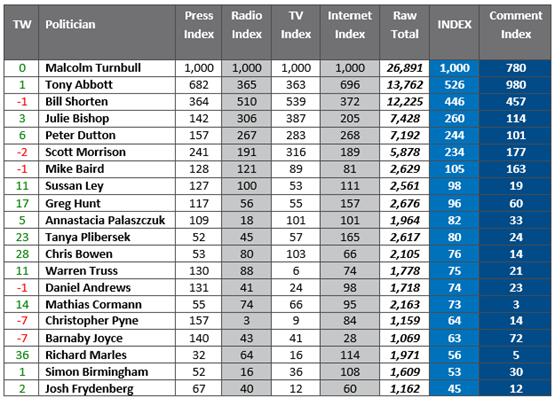 Tony Abbott’s London speech saw him fly back to the top of social media comment, almost twice the PM’s level.

The GST and Knights and Dames were hot topics on talkback last week, again with Tony Abbott very prominent.

Whether or not you think the horse racing industry is cruel, you’ve gotta admit Payne’s quote — “to everyone who thinks women aren’t strong enough, get stuffed!” — warmed your heart just a little.