Knights and dames no more ... colourful beheadings ... Pyne the wizard ...

Good Knight. Today we mourn the passing of the most captain-est of captain’s picks from Tony Abbott: the resurrection of knights and dames. Prime Minister Malcolm Turnbull announced today that knights and dames would no longer be appointed to the Order of Australia because cabinet decided they “are not appropriate” for our modern honours system. For those lucky five who were made knights or dames in the short time after Abbott announced it: Dame Quentin Bryce, Sir Peter Cosgrove, Dame Marie Bashir, Prince Philip, and Sir Angus Houston, it is now something of a collector’s item.

Ms Tips worries for staunch conservative — and a man who loves the Queen just a little bit too much — David Flint. He tweeted his displeasure at even the whiff of change in September, and let fly to Fairfax this morning, labelling the move “revenge” for the 1999 referendum.

No word yet on whether the new, “agile” Prime Minister will seek to make the title “Innovator” part of the Order of Australia.

ALP investigation questioned already. The Victorian branch of the ALP announced last week that it would be investigating allegations of branch-stacking, with the use of pre-paid anonymous gift cards to pay for as many as 500 memberships at the centre of the inquiry. According to The Age, the scam has run for years and the investigation will be run by Labor Right figure Garth Head and Liz Beattie of the Left. Not all are happy with the form of the internal investigation, with some on the administrative committee lobbying for an external inquiry. Administrative Committee member Eric Dearricott wrote to ALP members on Friday to state his qualms:

“Given the distortion to the FEA (Federal Electorate Assembly) rolls and the allocation of State Conference delegates to FEAs of a potential 500 members who may not be eligible to vote, a consensus emerged that the already postponed FEA elections would have to be postponed pending the outcome of the investigation.
I was uneasy but given the potential of the investigation to strike a major blow against branch stacking I and the people I was able to consult thought a postponement of the FEA elections would be on balance justified.

“Such a postponement would require ratification by the National Executive.

“Eventually the Right accepted the investigation proposal but refused to accept an independent investigator (despite the fact that an eminently qualified impartial Party member was proposed) instead demanding an investigating Committee of one Right and one Left nominee. The Left blinked.

“So what we have is in investigation with satisfactory guidelines into the misuse of cards and in particular gift cards to pay memberships online with a 2 person factionally based investigation panel rather than a demonstrably impartial investigator and FEA elections although nominations still close today, subject to National Executive approval, postponed until February 2016.

Stocking filler? An outraged tipster got in touch with Crikey after receiving this in his inbox from the ABC Shop last week: 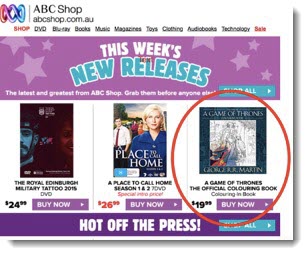 Featured as a new release was “A Game of Thrones: The official colouring book“, which our tipster thought was marketed for children, saying “I guess rape, torture, beheading and incest are the TV fare of colouring book kiddies!” The book, like the series, is not for children at all, but part of the worldwide phenomenon of adults’ colouring-in books — which are topping bestseller lists at bookshops around the country. It’s not advertised for children, but only requires the colouring expertise equivalent to those still in preschool (just use a few shades of red and don’t bother staying in between the lines).

It joins many other adult colouring books to recently lining store shelves, pegged as a trend enabling readers to disconnect from the dominance of digital devices in their lives. The Age cartoonist Oslo Davis doesn’t see the appeal though, saying in The Sydney Morning Herald that adult colouring books made “zero demands” on readers’ creativity and were “the most limp of arts, if you could even call it an art”. In fairness, there is a substantial amount of detail in the characters, and backgrounds, and features contributions from renowned illustrators such as Yvonne Gilbert and John Howe. Diehard GOT fans are sure to buy the book regardless — just don’t put it in your kid’s stocking this Christmas.

Of men and muggles. Many Australians celebrated Halloween on Saturday night, with costumes and trick or treating around their neighbourhoods, including Industry Minister Christopher Pyne, who tweeted about the evening, but said there were unfortunately no photos: 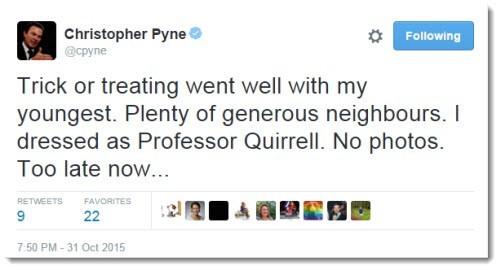 For those who don’t understand who Professor Quirrell is, Pyne is referring to one of the minor baddies in JK Rowling’s Harry Potter series, featured in the first book. Even for dedicated fans of the series, it’s a pretty niche choice. Strewth’s Christian Kerr reported incorrectly this morning that Pyne had dressed up as Professor Dumbledore, the Hogwarts headmaster and one of the heroes of the franchise. If Kerr had read the series, he would realise the egregious error he’d made — but at least he’s no Rita Skeeter.

Lorna Jane on 60 Minutes. Fashion and fitspo businesswoman Lorna Jane Clarkson appeared on 60 Minutes last night, defending the job ad seeking a “receptionist/fit model”, a story that Crikey broke a few months ago. Clarkson said that the media had misinterpreted the ad, saying that a fit model is used to test how the clothes fit, and that “fit doesn’t mean skinny”. Though the measurements that appeared in the ad are what most people would define as skinny.

ABC regional producers. We’ve reported that many at the ABC are less than impressed with proposed changes to the breakfast and morning programs across regional Australia, but that the ABC was promising that the changes would assist with the under-resourced breakfast programs. As part pf the changes, the programs would gain a producer to help create the extra content. Crikey hears, however, that the producers won’t be starting work each day until 7am — after the breakfast program actually starts airing, meaning that they’ll be a step behind when it comes to breaking local news. Why the sleep in? Whispers say it’s to avoid paying penalty rates.

Fuel for News. Last week we reported that a Crikey reader had been offered a free copy of The Australian and The Daily Telegraph at a servo in Canberra, and after a flurry of tips it seems this isn’t an isolated experience. According to tipsters across the country, those spending more than $40 at Woolies Caltex petrol stations have been offered a free copy of a News Corp paper — either the Oz or their local tabloid. One tipster said: “For spending over $40 at a Woolworths petrol station, I was ‘rewarded’ with the offer of a free Australian or Daily Telegraph. My response to this kind offer was, sadly, less than gracious.” So if you can get free papers at the airport, the gym, a university, and now at the servo — who’s actually paying for the paper?

So Malcontent has finally made a DECISION, on one of the most important issues facing the country – no more knights and dames!
What a joke this man is!!

Yes CML.. but with agility and nimbleness..

After what he tried to do to Gonski I’m surprised Pyne didn’t come out as Dolores Umbridge?

I’d prefer some free rolls of toilet paper or Jiffy fire starters rather than the News Corp substitute.