A million Australians (and Kiwis living here) tuned in to the Rugby World Cup final. Plus other media tidbits of the day.

A million bleary-eyed rugby fans. Just on a million desperates, tragics and Kiwis got up in the early hours of Sunday morning to watch the Rugby World Cup final, won for a record third time by the New Zealand All Blacks. In fact the final, unknown figure was probably in excess of a million because of the inability of any ratings system to note the number of people watching in clubs, pubs and other venues (the same will apply to tomorrow’s Melbourne Cup). A total of 706,000 people watched the game across the country on Gem, the digital channel (501,000 in the metros, but not Perth, and 205,ooo people who watched Gem in the regions). A further 292,000 people watched the game on Fox Sports.That made a total of 998,000 people, which from around 3 am to just before 5 am is a pretty big audience for any program, let alone Rugby Union. — Glenn Dyer

News UK goes off paywalls. While the local News Corp outfit still holds out faith in paywalls, in the UK things are rather different. Rebekah Brooks, the newish News UK CEO certainly thinks otherwise and has canned the paywall around The Sun to try to lift its online performance. This new scepticism about the worth of a paywall for The Sun is obviously supported in New York by Rupert and Lachlan Murdoch, the co-chairs of News, and CEO, Robert Thomson, because the decision is a near 180-degree backflip on previous strategy.

Starting from yesterday, Sun readers will not be charged for reading digital content, and by November 30 the paywall will come down for all but an unspecified portion (believed to be linked to highlights of the English Premier League soccer and other video content, such as fantasy team competitions) just over two years after it began charging for website content (in August 2013). The Sun had attracted around 200,000 paying subscribers (the figure hasn’t been updated for months, suggesting it has seen no growth) but has lost ground in terms of overall readership in the last two years. In fact, The Sun had become irrelevant in online news in the UK, swamped by the Daily Mail sites, The Guardian, the BBC and the Mirror websites — all free.

“Recent months have been filled with experimentation at The Sun. The standalone political site SunNation won plaudits at election time, we increased the number of shareable stories on social media, we entered platform partnerships with Apple News and we will be a major player in Facebook Instant Articles.”

Buried in the statement from Brooks was the second most important bit of news — it has been forced to hire outside News Corp to find someone to oversee the new free site (That is an indictment on the management of the paper and News Corp generally). The man hired for the job is Keith Poole, the managing editor of Daily Mail’s online operation in the US. News Corp was also forced to look outside the company for the new editor of The Sun, Tony Gallagher, who is a former senior editor with The Telegraph and the Daily Mail. News Corp is due to report its September-quarter results Friday morning (Sydney time). — Glenn Dyer

Trying their luck. Friends of the ABC took out half-page ads in the Fairfax papers on Saturday, calling on Malcolm Turnbull to restore ABC funding to pre-Abbott levels … 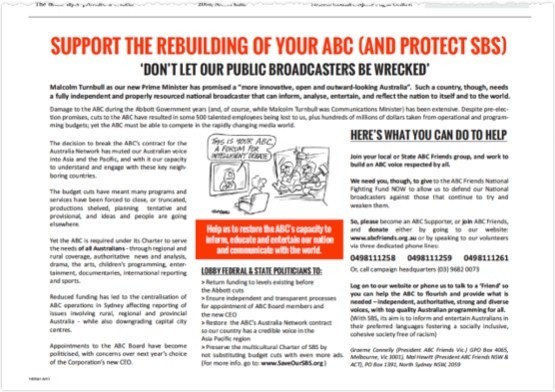 Video of the day. Josh Frydenberg’s constituents give him advice on how to deal with his thinning hair. 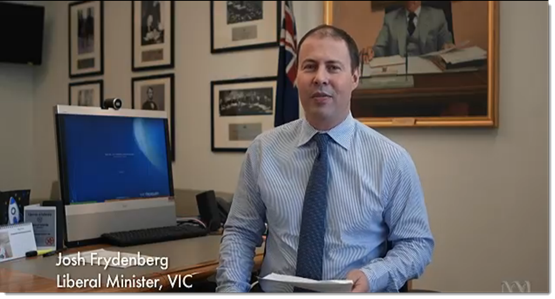 Front page of the day. Won’t somebody think of the children? 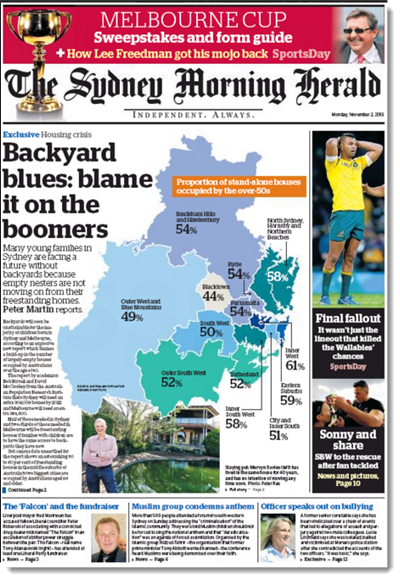 The World Cup of what exactly?

Unfortunately Frydenberg like that other minister is a chinless wonder.Never trust a man without a chin.

Kooyong has been a death sentence for everyone since…Ming.