We’ve got bad blood. Ms Tips couldn’t help but notice the significant amount of schadenfreude going on at The Australian at the moment over the reported $10 million defamation lawsuit from Grantham quarry owners the Wagner family against Alan Jones and former Australian employee — and still occasional columnist — Nick Cater. Jones made comments on 2GB and 4BC, and Cater made comments on 60 Minutes linking the Wagners’ quarry to a 2011 flash flood in Grantham that killed 12 people. Hedley Thomas has covered the court case in-depth, and  in Strewth today Crikey favourite James Jeffrey ponders why The Spectator Australia, which ran a lengthy front-page piece on the matter, escaped the defamation action:

“The only surprise in the whole thing is one absence from the hit list: The Spectator Australia and its ‘wall of lies’. Is this a cruel snub? It seems, well, a bit disrespectful to a publication of its clout and repute.”

A tipster suggests that the reason The Australian may be going after its former brethren is that Cater just wasn’t all that liked within The Australian while he was opinion editor and Saturday editor. Our tipster says:

“On the afternoon of Cater’s farewell which, as tradition demands at News, was at the Aurora Hotel just half a block away down Kippax Street. First of all nobody came, until someone rang the newsroom and said, ‘Hey, Cater’s buying drinks at the Aurora’. Later, when it came time for speeches, Cater said that he was leaving so he’d have ‘more time for writing’, upon which a voice from the back (a senior sub), muttered in a very loud undertone, ‘That bastard couldn’t write a note to the milkman!'”

Our tipster says Jeffrey gave Cater a “very deft kick to the goolies” in Strewth today, “all the more remarkable because Cater is still a regular columnist in the paper”. Speculates our tipster:

“Methinks that with the demise of Abbott and his uber-conservative claqueurs in the media, the more independent minds at the Oz may be feeling they can write more freely.”

Seven shocks with Morrison pick. Yesterday Crikey reported that shock jock and unsuccessful NSW Liberal Party candidate Jason Morrison would be replacing Seven Sydney newsroom boss Chris Willis. A tip from someone inside Seven suggests there will be no tears shed inside the newsroom for Willis, who was apparently known for his bad moods and grudges. But a tipster tells us there were audible sounds of disbelief that Morrison would be his replacement:

“Seven news staff are reeling. After waiting for years for a new guard to replace Willis, they end up with a hard right driven ideologue … It is disturbing — for the industry not just Seven — that someone who daily ranted so vehemently and politically on 2GB will now be deciding the tone and issues for ‘news’.”

ABC goes down, plus exclusive Crabb. Down, down, Aunty was down — for at least four hours on Thursday, the ABC News and Radio National websites were unreachable. It was inconvenient timing for the national broadcaster as it coincided with the announcement of a drastic changes to regional programming that have quite a few regional ABC stations, not to mention the local MPs in those areas, quite upset.

A spokesperson for the ABC said the website had gone down due to “web servers being locked, which has prevented any content from being uploaded”.

ABC managing director Mark Scott tweeted his apologies for the down time, stating there were “[Hordes] at work to try and fix things up ASAP”, but this earned a sharp rebuke from  Liberal MP for the Townsville seat of Herbert, Ewen Jones, who suggested the ABC might fix it by shutting down more regional services. 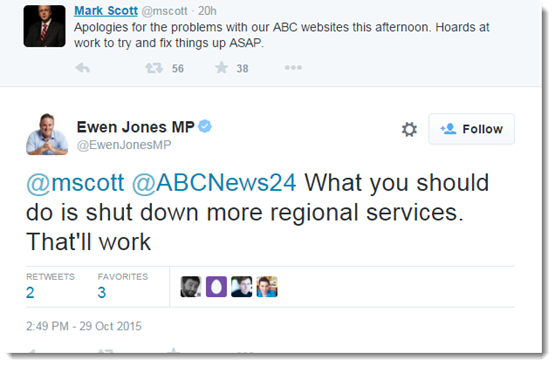 Jones was doing the rounds this morning calling for the local ABC programs in his electorate to be saved, despite how he says he is treated by the station:

“Paula Tapiolas’ program is not just about politics, it’s about our community, the flavour and the texture and the colour of our community and her role here in her two and a half hours on air is vital … And can I tell you, I’m not a great fan of Paula’s because she beats the living daylights out of me, and I don’t get a great run on the show, but it’s not just about Ewen Jones. It’s about the north, it’s about our region.”

This week also brought the iview-only spin-off series to Kitchen Cabinet, Canberra al-desko. There are 12 episodes on iview (each is about five minutes long), with Annabel Crabb visiting MPs in their offices for a meal they would normally eat at their desks. Ms Tips enjoyed the episodes with Liberal numbers man James McGrath and Labor Senator Sam Dastyari — and that’s not even mentioning Jacqui Lambie’s search for the hot tradie. Strangely the ABC has decided to brand the episodes as “exclusive”. The term “exclusive” is overused at the best of times, but we’re not sure it was ever in doubt that the series would be anywhere but the ABC?

Where’s Lippo? It didn’t take long for Sky News to clear out David Lipson’s history with the channel. After it was announced this week that Lipson would be the Canberra-based political correspondent for the ABC’s Lateline, Sky News immediately announced his replacement, Dan Bourchier. Although Lipson isn’t starting until early next year on Aunty, it appears he is all done with Sky. A keen observer pointed out to us that Lipson’s profile has already been erased from Sky News’ website. Perhaps he is getting a well-earned break ahead of his ABC debut? 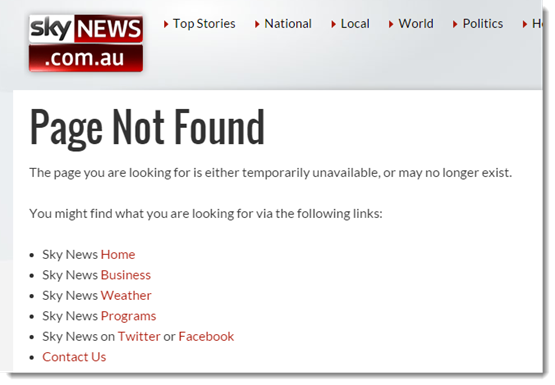 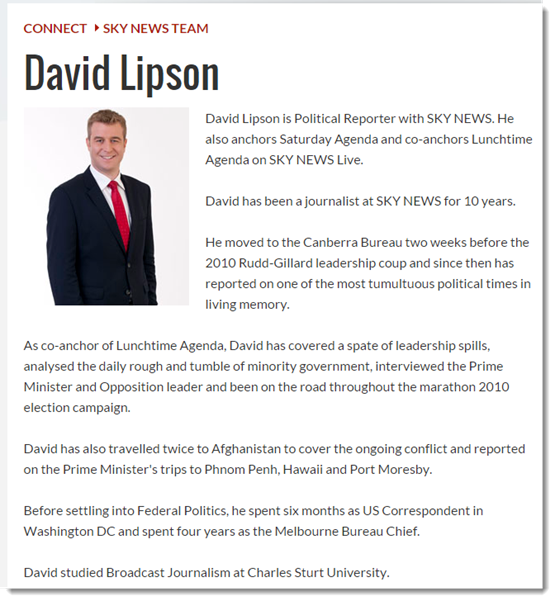 Servo circulation. It’s commonplace for newspapers to be given away at the gym, at universities, or at the airport, but the service station near the airport, too? A tipster tells us at a service station near Canberra airport he was offered free copies of The Australian and The Daily Telegraph. It’s one way to boost circulation. No takers, unfortunately, with our tipster telling us: “I indicated that the birdcage already had a liner, so no thanks”. If you spot any other free copies of the daily rags in odd places, let us know.

Where’s the plane, Tone? We still don’t know the fate of MH370 for sure, but a tipster in Carnavron, 900km north of Perth has told us there have been “suitcases and bits of metal floating up on the beach lately”. Could it be MH370?

JESUS H, can no one spell? It’s HORDES Mark, not Hoards

I thought he meant that he’ll spend the hoards of ill gotten tax monies on spiffling stuff like being audible beyond the latte belt.

And I dont know about bits of MH 370 being washed in WA up but a typo certainly washed up – it’s Carnarvon not Canavron.
And hordes not hoards as also spotted by fellow spelling Nazi Herr Newton.