What about the coffee? We must know! Plus other media tidbits of the day.

The truth about the coffee at Ultimo. After LNP Senator Ian McDonald said the ABC was cutting into regional programming to fund a new latte machine at Ultimo (in jest, we hope), Crikey’s throw-away comment that ABC staff at Ultimo had excellent coffee just around the corner drew almost more correspondence than the main thrust of our story itself.

For the edification of Coalition MPs, we thought we’d share what we’ve been told about the coffee at ABC HQ.

Apparently, there are no latte machines, apart from those in two privately run cafes where ABC staff have to purchase coffee like regular members of the public. There is ground coffee in the kitchenettes, though as one commenter pointed out, plungers are unlikely to put a significant dent in the ABC budget. Of recent years there has been a pod machine, but it was supplied by a member of ABC staff. Staffers who want to use it have to bring in their own coffee pods. Which is just politically astute frankly — imagine the outcry if the ABC had a latte machine. It’d be on the front page of the Tele!

Mind you, even BYO pods and ground coffee sounds like luxury to some. Crikey’s website producer, who used to work for the ABC in central Queensland, informs your correspondent staff there got nothing. They even had to bring their own milk. Character-building, that. — Myriam Robin

And on that topic … Yesterday’s beat-up du jour, the alleged gutting of ABC regional radio, had Senator Ian McDonald reaching for the …. oh no oh no he’s doing it, coffee-shaming. This is a proud entry in the competition to be the last person to use the latte, the drink that doesn’t know if it’s a clotted coffee or a hot milkshake, as a measure of sophistication.

Indeed, it’s not only Ultimo that has a latte round the corner. McDonald is a roving Senator, but he spent 11 years at Burdekin Shire council on Queensland’s coast. A quick google of the location reveals that the Golden Grain coffee lounge is 50 metres walk away, proudly advertised with a sculpted flat white. Lattes presumably are available. A New Yorker is never more than 10 metres from a rat, and populist rural hacks never more than 50 metres from a latte, seems to be the rule — Guy Rundle

McDonell signs off. The ABC has lost one of its best to the BBC.

Legendary China correspondent Stephen McDonell announced “with sadness and excitement” that he’s jumping ship from one Aunty to the next in 2016.

McDonell is one of Australia’s most experienced foreign correspondents. He’s been embedded in China for a decade, seeing off nearly a dozen Australian newspaper correspondents. We’re informed he speaks “near-perfect” Mandarin, and evidently had no desire to leave Beijing. He’ll be replaced at Aunty by current Tokyo correspondent Matthew Carney, it was announced in September, as part of a general rotation of ABC correspondents. — Myriam Robin

More bad news for print. No sign of any real improvement in the underlying operational and financial positions of four of America’s major newspaper-based media groups in the September quarter. Ad revenues, especially for print, were mixed (and a touch stronger for at least one of the four), digital ad revenues were weak to falling, but some print revenues rose thanks to paywalls. But the overwhelming trend from the quarterly reports of The New York Times Co, Gannett, McClatchy and New Media Investments was one of continuing slow decline. The profits and small losses were all hailed as solid results for the quarter, but they were all explained by sharp falls in costs in the quarter as bean-counters continued to rip apart their cost bases.

At the New York Times Co, stronger circulation and ad revenues from dead-trees papers, plus a jump in digital subscribers and paywall payments, gave the New York Times Co a rare third-quarter profit, more than reversing a loss for the same period of 2014. But while management greeted the performance, they skated over the first fall in digital ad revenues in a year. CEO Mark Thompson said it was the Times’ “best advertising quarter of the year”. That was despite a 5% fall in digital ad revenues. The company earned a profit of US$9.4 million, against the loss of US$12.5 million, a year earlier. The Times said it added 51,000 net digital subscribers for The New York Times in the September quarter, the largest number of quarterly additions since 2012. This took the total number of digital subscribers to 1.04 million. As a result, circulation revenue rose 1.1% to US$209.1 million, as the company’s digital-subscription push and an increase in home-delivery prices again offset a fall in print copies sold.

Gannett, publisher of USA Today and more than 90 other papers across the US, said its third-quarter revenue slid 8.6% thanks to continuing weakness in advertising and circulation revenues. Gannett recently spun off into a pure newspaper company, separating its television assets into a new company called Tegna Inc. Earlier this month the company agreed to buy Journal Media Group, owner of the Milwaukee Journal Sentinel and other newspapers, for about US$280 million. Gannett reported a profit of US$39.2 million, down from US$50.6 million.

New Media Investments provided a “same store” revenue comparison, factoring out the many papers it has acquired since the third quarter of last year. On that basis, total revenue was down 5.7% compared to the 2015 quarter and print advertising off 10.4% 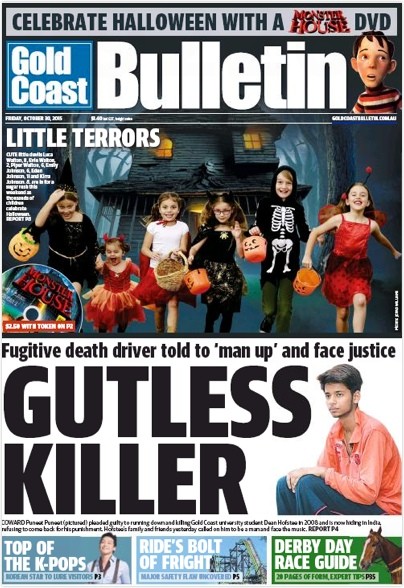 Guy, we’ll have to give our Ewan Jones credit for some originality. In today’s Townsville Bulletin, which has dumped mightily on the ABC, Jones is quoted as say:
“It’s not our ABC. It is some inner city beret wearing, skivvy wearing, vespa riding intelligencia ABC.”

Hugh – was it meant as pastiche?

That’s great Charlie, berets, skivvys and Vespas. We can all picture it.
Who the fuck is Ewan Jones?

AR, Christ knows. Isn’t the name Jones Welsh? Isn’t ‘pastiche’ French? Townsville is avant-garde (if you’re from Bowen) so perhaps our Ewen was reacting to the presence of Nationals leader Warren Truss in town yesterday (opening a new road) and thought he’d couch his terms to match the local aesthetic. Remember, the ‘Ville is still on a Cowboys high. We are the centre of the universe at least until Sunday morning when the Wallabies will be given the keys to the Southern Hemisphere and all New Zealanders will have to re-apply for their visas!

It looks suspiciously like a straight cut’n’paste from elsewhere – when was the last time your saw a vespa & a beret in the same week?
Skivvy, maybe Melbourne 1960 but the dead give-away is the european spelling of ‘intelligentia’.