It’s hard to let go. It’s been a month since Kevin Andrews lost his position as minister for defence. He complained loudly, announcing he had been dumped before Prime Minister Malcolm Turnbull had a chance to announce his first ministry, and the first female defence minister, Marise Payne. But it seems Andrews, now currently residing on the backbench, has not yet used his newfound free time to update the auto-reply to acknowledge his sacking:

Thank you for your email. This is an automated reply to let you know that your email has been received by my office.

I receive a considerable amount of correspondence and, whilst every effort is made, it is not always possible to reply to each email.

In responding to emails, I give priority to my constituents in the electorate of Menzies and to stakeholders from my Ministerial portfolio of Defence …

Rough internet justice. Spare a thought for the poor workers in the Victorian Department of Justice. Long have their IT issues been well-known; judges have complained about IT, and computer problems have been the subject of numerous reviews. The department is still on Lotus Notes and using Office 2003, for example. But it gets worse. A tipster informs us the department has been without internet access at all for the past two days:

“Currently we’re into day two of no working internet access and a complete inability to send or receive emails to/from anyone outside of government. Even when the technology is working it’s incredibly slow and buggy — one department logged the time they spent waiting for technology to do its thing, and found they were losing 30mins across every 2 hour block. I know it’s an expensive exercise to upgrade servers, hardware and software across large Government Departments, but surely the productivity costs of continuing to (attempt) to work with what we’ve got must be greater still? An investment in our technology is WELL overdue.”

A spokesperson for the department confirmed there had been “a few issues” with internet access, and some difficulties with email.

Lucy hints for Turnbull’s R&D plans. Crikey earlier this week reported on the need for Turnbull to do more to turn his words about making science at the heart of the government’s agenda into action. Innovation Minister Christopher Pyne said on Tuesday there would be a “substantial and comprehensive innovation and science agenda” announced by the end of this year:

“The innovation and science agenda will cover the entire sector from taxation, from short-term measures, to medium to long-term measures. It will be, hopefully, a game changer [in] terms of Australia’s cultural understanding of the role science and research can play in innovation and in growing jobs and growing the economy.”

The rumour is there will be a change to R&D tax incentives. For an early hint at what the government might be thinking, you need look no further than the wife of the Prime Minister. Lucy Turnbull is currently the chair of Prima BioMed, an ASX-listed biotechnology company. Turnbull decided to put herself forward for re-election this month. In the company’s annual report in August before the leadership change, Lucy Turnbull reported to shareholders is that one of the advantages of the dedicated research laboratory for Prime BioMed “being based outside Paris is that we benefit from significant R&D rebates from the French government”.

Could Turnbull be looking for a regional and rural-based R&D tax incentive for companies to get out of the cities?

Right channel, wrong star. Yesterday Ms Tips reported that ABC’s Lateline was eyeing off someone at Sky News to become the news show’s Canberra correspondent. Rumour was that it was Kieran Gilbert, but he didn’t respond to us by deadline. Shortly after Crikey was published, it was revealed that David Lipson, or Lippo, as he is affectionately known in the press gallery, will become the new Canberra correspondent for Lateline in 2016. We’re told we didn’t smoke Lateline out in making the announcement yesterday, but the timing certainly was convenient …

From the internal email by Lateline EP Lisa Whitby to staff:

“David comes to us from Sky News Australia, where he’s been a senior political reporter in the Parliament House bureau for the past five years. Before that, he held a variety of other senior roles at Sky, including Melbourne Bureau Chief, Washington Correspondent, and producer/reporter in Sydney.

“He’s also worked in radio, and set up a television station in Mongolia – and he’s handy at shooting and editing.”

His title is “political correspondent”, and he starts in January. While we are sure Sky is sad to see him go, on the upside, viewers will no longer be confused between “brunette” and “silver fox” Speersy.

For no reason at all, here is a picture from a recent story he did on Back to the Future. 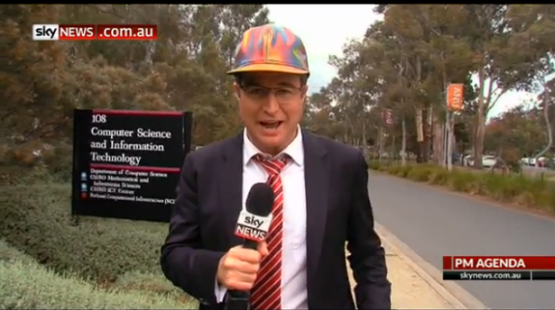 Old Macdonald wants Queensland cannabis farms. The bipartisan approach to making it easier to grow medical cannabis in Australia has been admirable. All sides of politics appear to be backing the government’s moves towards making it easier for patients to access the medicine in Australia, and for farmers to be able to grow it in the first place. So Ms Tips was delighted to see the normally quite conservative Liberal Senator Ian Macdonald backing medicinal cannabis after participating in a parliamentary inquiry on the matter.

Although he has some reservations about Greens leader Richard Di Natale’s legislation, he is keen to see farms in his home state become cannabis growers, after Dr Lisa Studdert from the Therapeutic Goods Administration explained it would take time to get crops in place.

Studdert: I think any bill and associated regulations and licensing will take some time. We are certainly under instructions from our minister to move as quickly as possible on that, but it will also be dependent on an application to grow a crop and that applicant putting in place the necessary arrangements to grow a crop. I understand it grows quite quickly, but obviously there will be a need to set that up—

Macdonald: If I could put in a plug for Queensland, it grows wonderfully up there!

Studdert: I would have to take your word on that!

By picking on the ABC, the government is fighting an enemy that no longer exists

Aussie TV coverage: networks take US feeds, as the ABC wheels out everyone but Play School