We're not your vassal state, says (sort of vassal state) Nauru. Plus other media tidbits of the day.

Get used to lack of access, says Nauru government. The Nauruan government says it can’t allow Australian journalists into Nauru to report on how Australia’s offshore detention regime is operating, because doing so would lead to chaos and rioting.

A statement put out yesterday afternoon by the Nauruan government paraphrases Nauruan Justice Minister David Adeang as saying if faced with an influx of journalists left to wander the island:

“… refugees who are now living peacefully would — under the direction of Australian based advocates — start to protest and riot for the cameras and there would be chaos that the nation’s police force would struggle to contain.”

Refugees on Nauru are safe, the minister contends, have freedom, and most live harmoniously with locals. But the government says:

“But this truth doesn’t suit the activist journalists. They need to paint a different picture to justify their political agendas and their own lack of fact-checking and poor journalism.”

Australian media clamouring for greater access and transparency forgot the fact that Nauru is not a state of Australia, the release states. Adeang goes on to accuse Australians of racism and disrespect, evidenced by their “ridiculous” questions:

“The Australian media approaches us with great arrogance and an air of racial superiority, which is highly offensive to us.

“They do not show us the respect of a sovereign nation and in return we have little respect for them.”

Wagners sue Jones. Queensland’s Wagner family have said they will sue 2GB licensee Harbour Radio and star shock jock Alan Jones after the Grantham flood inquiry cleared the Grantham quarry, which is owned by the Wagner family, of having significantly contributed to the 2011 natural disaster that killed 12.

Alan Jones was a key proponent of having the inquiry in the first place, as he believed the quarry had been a key factor in the floods. He spent years railing against the Wagners for, he said, bearing culpability over the deaths of 12 people.

Denis Wagner issued a statement yesterday saying the family felt it had been “unlawfully treated”:

“The outcome of proceedings will hopefully in some way go toward correcting the false and defamatory statements about the 2011 Grantham flood tragedy … that have caused significant damage to the reputation of our family.”

The Wagner family is one of Australia’s wealthiest — BRW estimated their wealth at $955 million earlier this year.

The Australian commentator Nick Cater was also a significant critic of the family over what he believed was their culpability over the floods, but he appears to have been left off proceedings. — Myriam Robin 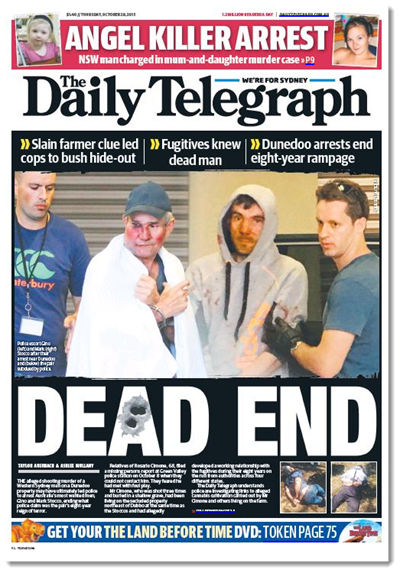