Tony Abbott has brought his "stop the boats" message to the UK. But as Crikey media reporter Myriam Robin and freelance journalist Alan Austin report, Britons weren't completely on board ... 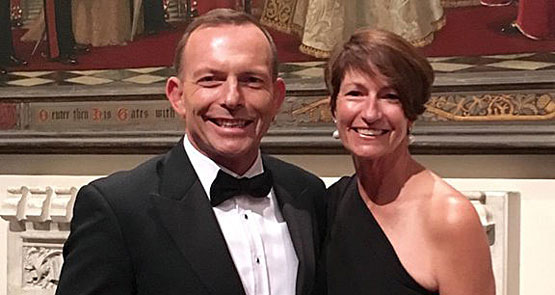 Tony and Margie Abbott at the Margaret Thatcher Lecture

Tony Abbott was born in the UK, but tragically never got to visit the country during his short time as prime minister. He’s rectifying that now, delivering a speech yesterday at the second Margaret Thatcher lecture in London and telling Europe to be more like Australia.

Sadly for Abbott, though, it seems the UK’s Tory establishment was less than welcoming of the message, if the media attention is anything to go by. Among much of the quality British press, the speech was barely covered. And its only on-the-record supporter appears to be UKIP’s Nigel Farage.

Abbott found a more receptive ear at the tabloids, with both the Sun and the Daily Mail giving due prominence to his warnings.

“Europe will be ‘forever changed’ unless immigrants are forcibly blocked from its borders by ‘turning boats around’, warned former Australian PM Tony Abbott tonight. Mr Abbott — who was forced out of office down under last month after being swept to power in 2013 on a hardline pledge to clamp down on immigration — claims that the continent is making a ‘catastrophic error’.”

The Daily Mail readers only read the headlines, so we’ll do the same:

“Tony Abbott says Europe opening its borders to refugees is a ‘catastrophic error’ and says they must turn back the boats”.

If Abbott wanted more respect outside the red tops, though, maybe he needs to spend more time in London. The Times put up a fairly straight report of the speech on its website, but it wasn’t suggesting Abbott should be taken seriously in its headline. “Push migrants back into sea, Abbott tells Europe,” it read.

Londoner’s Diary in the Evening Standard headed its piece “Tony talks the Tory language over migrants”. It continued:

“Former Australian Prime Minister Tony Abbott has lost little of his robustness, nor found much charm, since losing power six weeks ago. He was at the Margaret Thatcher Centre banquet at Guildhall last night to deliver a keynote speech about Thatcher before switching to the subject of border control and the European Union’s apparent inability to deal with the refugee crisis.”

The diarist pondered whether guests might “find it difficult to digest their beef after all this talk?” but found “not our Tory backbenchers,” one of whom praised its “really strong message”.

Chatting later, Abbott told the diarist: “Life’s been a lot quieter [since losing the prime ministership] … a lot of cycling, a lot of downtime.”

The Guardian’s Australian reporters covered the speech straight, but in the UK they went for straight mockery, with John Crace making the speech the subject of his political sketch.Crace wrote, channelling Abbott:

“It’s a great honour to have been asked to give the second annual Margaret Thatcher lecture here in London, England. As most of you will know, Mrs T was a sheila but she managed to rise above that disability to bomb the shit out of the Argies and take back the Falklands for Great Britain and to piss off most of the rest of Europe. She was the kind of leader every country needs …

“You want to know why Australia is so good at rugby? Well let me tell you. It’s because we closed our borders on every damn illegal immigrant who came within 100 metres of our shore. That’s right. Every foreign scrounger who turned up pleading persecution in their own country was sent back to somewhere else. And if you Brits want to get good at rugby again you’re going to have to learn to do the same thing.”

Meanwhile UK political blog Guido Fawkes reported that “Tory Cabinet ministers winced as former Australian PM Tony Abbott warned Europe must use ‘force’ to ‘turn boats around’ and ‘establish camps’ for migrants”, adding that one top Tory had described the plan as “fascistic”.

Still, perhaps the item was a back-handed compliment to Abbott from the very right-wing blog, as it quotes Farage describing the speech as “heroic”. It also lists — and this was far less remarked upon by anyone — Abbott’s fellow speakers: disgraced Tory MP and convicted perjurer Jeffrey Archer, and famously offensive comedian Jim Davidson, whose routines about black Brits were ratings winners in the 1970s, and unrepeatable today. As Guido Fawkes writes of Davidson, it was “a rare occasion where he was not the most controversial speaker”. What a line-up!

What a pity the speech didn’t encompass Abbott’s obsession with coal, that would’ve capped off the evening as 100% risible.

Not that bastardry towards refugees is anything to laugh at but Abbott is capable of such fine self-parody it’s difficult not to have a chuckle seeing him unleashed on the hapless Brits.

A sight extraordinaire ie: Abbott flanked by the colourful Lord Archer, enjoying each other’s august company. I trust the organisers of the Thatcher lecture allocated double the usual time for Abbott’s speech bearing in mind his inability to state anything only once.

“His views are in hot demand all around the world.” was Turnbulls response…just not around the cabinet table apparently where he is no doubt considered an unflushable turd..

It is interesting, though, that Abbott has finally come clean and publicly admitted that turning back the boats had nothing to do with saving lives at sea. We all knew this, of course, but he has never been so candid in stating that the policy is about preserving his idea of Australia and preventing the ‘catastrophic errors’ that will befall Europe.

Now what are the chances that the Tony Burkes, Bill Shortens, Peter Duttons and Scott Morrisons – who also clutch the transparent ‘lives at sea’ moral cloth closely and weep their crocodile tears – will catch this outbreak of honesty?

When you disgust even the real-deal tory backwoods types, the shark has been jumped to buggery.