Transfield needs its lucrative detention centre contracts. But they come at the cost of some very bad PR. 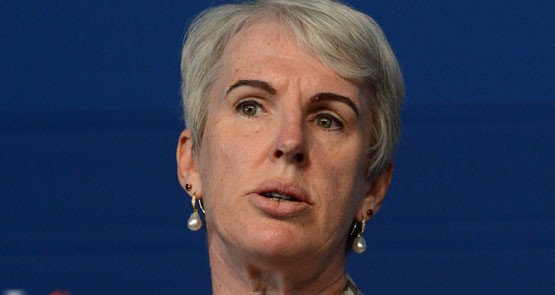 A perfect storm surrounds Transfield Services ahead of its annual general meeting later today, with unions, activist groups and, perhaps most crucially, two of the world’s most prominent proxy advisory firms raising serious objections about the lack of transparency around the detention centres the company operates in Nauru.

The federal government contracted Transfield Services in October 2012 to manage Australia’s detention centres on both Nauru and Christmas Island. A new report by activist group No Business in Abuse — an affiliate of GetUp that aims to get businesses to pledge to not be involved with, or profit from, “abusive practices towards people seeking asylum” — collates evidence from a variety of government sources to estimate Transfield Services has been paid $1.5 billion over three years to manage the centres.

Other parts of the Transfield business are struggling, so the contract is vital to the company, whose share price has almost halved in the past year. Another five-year contract for the running of the centres was expected to be awarded to Transfield Services at the end of this month, but the company revealed to the ASX this morning it had instead decided to extend its existing contract. That delays till March 2016 the implementation date of any new contract. The five-year contract is expected to be worth $2.7 billion.

The contract poses a large PR problem for the Australian-based company, but one Transfield’s main lobbying firm Capital Hill has been working on since it was awarded Transfield’s business last year. Capital Hill is a relatively new firm started by Liberal heavy-hitters Michael Photios, a former MP, and Nicholas Campbell. It operates in Sydney out of the MLC building, on the same floor as John Howard’s office.

Campbell, chairman of Capital Hill, has ties to Prime Minister Malcolm Turnbull. He is a former president of the NSW Liberal Party and used to work for Senator Bill Heffernan. He was also involved in Turnbull’s initial campaign for the seat of Wentworth.

For Capital Hill, the Transfield contract is a big one. Crikey understands that about three months ago, several of Capital Hill’s senior staff were flown to Nauru to inspect the island nation and its facilities for themselves.

Transfield has made an effort in recent months to justify the Nauru centres it operates. It’s not that common for company chairs to have a large presence in the media, but earlier this month, Transfield chair Diane Smith-Gander gave an interview to the Financial Review arguing the activist attention on the centres was “misplaced”, as Transfield Services did not set government policy. She said the company was delivering a “safe environment” and “care and welfare” to refugees. “When I was there, the strongest emotion I had was a real sense of pride in the work that the company and the individual Transfield employees are doing,” she added. The statement got splashed on the front page, leading to a predictable backlash on social media. 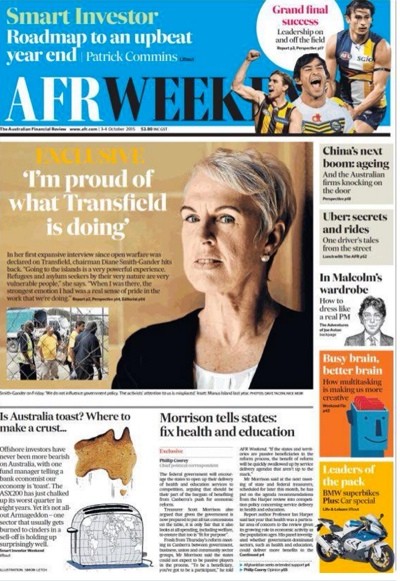 There have been other attempts to soften the company’s image. In June this year, the company signed a Human Rights statement, which among other things promises to respect the human rights of its employees and encourage employees to raise concerns if they feel the need.

It is interesting to consider what role Australian associate editor Chris Kenny’s recent visit to Nauru plays in this. Kenny used to work for Turnbull and is also a proponent of offshore detention. Although no other journalists have been allowed on Nauru for close to two years, Kenny was allowed in earlier this month. His reports, while making little mention of Transfield, gave first-person validation to the conditions on Nauru as described Smith-Gander (she says she visited Nauru in August and plans to return before the end of the year). For example, in a feature published on Monday, Kenny wrote:

“Eating breakfast last week at an island cafe, the television is turned to ABC News 24. It runs an item about Nauru, including comments from Human Rights Commissioner Gillian Triggs talking about ‘detention’ centres.

“This is jarring when right opposite the cafe refugees are operating a car wash.

“There is no longer any detention on the island; refugees and asylum-seekers either live in the community or in centres from which they can come and go as they please.”

A lack of transparency, he argued, played into the hands of refugee activists and political opponents of offshore processing, who were able to paint Nauru as worse than it truly was.

The exact details of how Kenny came to be on Nauru have yet to come out. Kenny himself said earlier this week he was unaware of the specifics, but he suspected his support for offshore processing might have played a part. An FOI has been filed with the department about his visa. This morning, Crikey asked both the Prime Minister’s Office and the office of Immigration Minister Peter Dutton whether they had been aware of Kenny’s arrival to Nauru before it occurred, or whether they had given advice on the granting of his visa. We did not hear back from either before deadline. 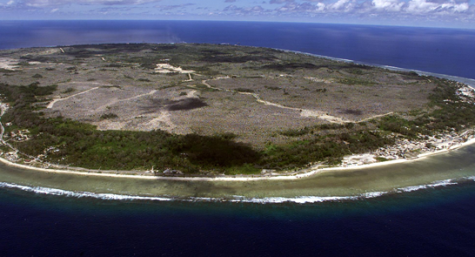 The whole set up seems to have fleas; perhaps literally as well as metaphorically.

Sounds like we could use some of the good ole entryprennynership here in Oz, refugees running a restaurant AND a car wash, the sky’s the limit.

Sounds like a Liberal Party paradise – free enterprise and everything nicely controlled, just with the odd guard here and there carrying a whacking great big stick. I have to give every Liberal Party member involved in this exercise great credit for not noisily grinding their teeth and popping a vein at the temporary reduction of relentless brutality towards the untermenschen – hopefully in the near future Brandis, Morrison, Dutton and his like-minded mates can anticipate a happier Christmas time singing Christan carols while guards in masks get busy sadistically whipping some sense into those ill-behaved children and pregnant women once again.

Kenny is right, let’s not refer to it as a ‘detention’ centre. More accurately it’s become a private club – or gated community – where ne’er do well outsiders or mischief makers are kept out. Residents are not to be tainted by physical contact with non-residents.

Nauru is now an exclusion centre.

I am troubled by Chris Kenny’s words:
“There is no longer any detention on the island; refugees and asylum-seekers either live in the community or in centres from which they can come and go as they please.”
On my observation, Chris is the only one who can come and go as he pleases, including imposing himself, at his own pleasure, on the now-lawful refugee, at her private place, inside this island of detention. Of course he asked permission, through the right channels and of course everything is ‘legal’; but it’s not ‘above board’. It’s still, “he said, she said”. There’s no honour anywhere. I think that’s what troubles me most.