Gilbert to Aunty? How do you lure a hot-shot reporter to Canberra? Well, it’s easier if they’re already there. There’s a rumour going around that the ABC is eyeing up some of the talent at the Sky News bureau, keen to make an acquisition. While there’s a bit of divergent chatter about who exactly Aunty is after, we hear from a source that the ABC is keen on Sky News’ Kieran Gilbert. We hear he could be lured over to act as Lateline’s Canberra correspondent. Is there anything to the rumours? We asked, but didn’t get a response from Gilbert by deadline. A Crikey tipster adds that it wouldn’t be the first raid on Sky’s offices by the ABC in recent months. Brihony Speed, Sky News’ Canberra EP, will be joining ABC 7.30 in Canberra as a producer early next year.

The Sky News bureau in Canberra has been extended recently with the arrival of veteran Canberra journo Lyndal Curtis, formerly of Aunty. She joins in the recently created position of Canberra bureau chief.

Sunrise stop work. Staff at The Sydney Morning Herald had a quick stop-work meeting yesterday for management talked them through the implications of the Sunrise training strategy — training mainly paper journos in how to make their articles more exciting to read online. The one-on-one interviews, management stressed, weren’t about encouraging redundancies, and there were no firm targets for any retrenchments, journos were told, confirming Crikey’s story from Monday. As Crikey reported then, people who aren’t on board with the new digital strategy at Fairfax –“‘sexy Gandalfs” et al — are being given the option of putting their hand up for redundancy in one-on-one meetings with management.

The promise of no forced redundancies was a relief to some. We’re told morale isn’t bad right now, as many of those most resistant to digital-first publishing and all it entails have already left. The feeling among those that remain is the SMH already operates a pretty lean newsroom, with not much more fat to cut. Not that that’s ever stopped anyone before, a tipster noted.

Malsplaining, the early years. One of the many differences people have noted between Prime Minister Malcolm Turnbull and his predecessor Tony Abbott is that Turnbull likes to spend a lot of time explaining things. The Prime Minister’s penchant for long answers explaining his views and beliefs stemmed back to an early age. According to Paddy Manning’s unauthorised biography of Turnbull, Born to Rule, young Turnbull, in form 4, wrote to the Sydney Morning Herald‘s letters editor to complain about multiple-choice answers in exams. The letter also shows an early sign of Turnbull’s interest in technology disrupting tradition:

“Sir — In this computer age one becomes accustomed to seeing traditional standards fall away before the sacred cows of progress, efficiency and speed … Much as I recognise the need for speedy marking of examinations, I fail to see why students should be deprived of the right to justify their opinions for the sake of speed and economy. I would rather see exam results a month late than have a student’s right to disagree without penalty lost.”

eSafety Commissioner targets Australia’s adult shop capital. Ms Tips previously reported that a number of WA adult shops were being asked to pull down images associated with film titles that had been R-rated over the past few weeks, usually when those titles are not put behind an age-verification page. It seems the e-Safety Commissioner, who is currently on a crusade to create a “human firewall” of cybersecurity experts in Australia, is now chasing outlets in the adult capital of Australia: Fyshwick. A tipster informs us ClubGallery, an adult shop that has sold DVDs for over 10 years, has recently been asked to take down titles. The office of Communications Minister Mitch Fifield has previously told us that the eSafety Commissioner only responds to complaints, rather that proactively investigating shops. Is there a vigilante out there visiting all the adult shop websites and dobbing them in now? Let us know.

Murray, who used to work for an anti-gay lobby group until he came out himself, accuses LGBTI interest groups of misrepresenting excerpts of Over the Top and Back, the autobiography of Sex Bomb singer Tom Jones. Murray says LGBTI groups are intentionally spinning the book to make Jones appear homophobic. But who is Joseph R Murray II? And what’s the Australian connection (the article’s only quote is from a Welsh LGBTI activist group, and the quote was giving to the UK Daily Mail)?  Unfamiliar with Murray’s work, we looked him up. His website explains he’s a trial attorney, civil rights litigator and public policy expert working out of Ripley, Mississippi. But alongside his biography lies a chummy photo of Murray with none other than the Welsh crooner Jones. 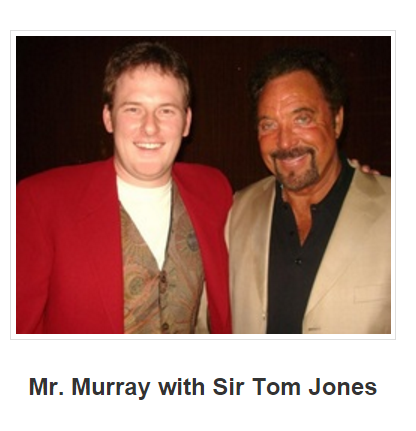 So was Murray’s piece a stand for fairness or a defence of his beloved music icon? Perhaps the answer is both.

You have to wonder why Fairfax ran with the story. No Australian media we can find covered Jones’ alleged homophobia. The piece had not previously appeared elsewhere, and Murray doesn’t have a public profile in Australia.

Maybe editors knew it would prove popular. Murray tweeted this morning to say his piece had found its way to the top of the most-read list.

Go back to space. Almost 50,000 Victorian teenagers were kept silent and mobile phone-free for over three long hours this morning. Sounds like torture for 17- and 18-year-olds, right? Well, not far off. It was their final English exam.

One component of the test typically elicits more frustration than any other. Section three, otherwise known as the language analysis task, asks to students to read a persuasive text and discuss the strategies employed by the writer to influence the audience. This year’s prescribed piece is a fictitious awards night speech from Stephanie Bennett, the fictitious head of a fictitious Australian financial institution presenting a trophy to the fictitious though familiar-sounding organisation, Tradespeople without Borders.  But why the all this fiction?

In 2011, the Victorian Curriculum and Assessment Authority (VCAA), which writes the exams, plagiarised a Helen Razer column about tattoo culture, clumsily editing the piece for its younger audience and then wrongly attributing the piece to “Helen Day”. The VCAA apologised and promised to commission an external review for all future uses of published texts. They’ve kept that promise, with subsequent language analysis appearing to be original, if decidedly duller.

In 2012, students were presented with a speech by a fictional retired teacher-librarian, Mrs Elliot, worried about the rise of the e-book. In 2013 students read an environmental group’s newsletter pleading for the local council to transform an abandoned railway yard into a community garden.

Last year, fictitious journalist Yvette Yergon advocated responsible space exploration. Some students are so frustrated by the task that, upon leaving the exam, they take to social media to proclaim their dislike for its writer. Razer noted the creation of “We Hate Helen” Facebook  groups in 2011, and even the non-existent Yergon copped a serve last year. 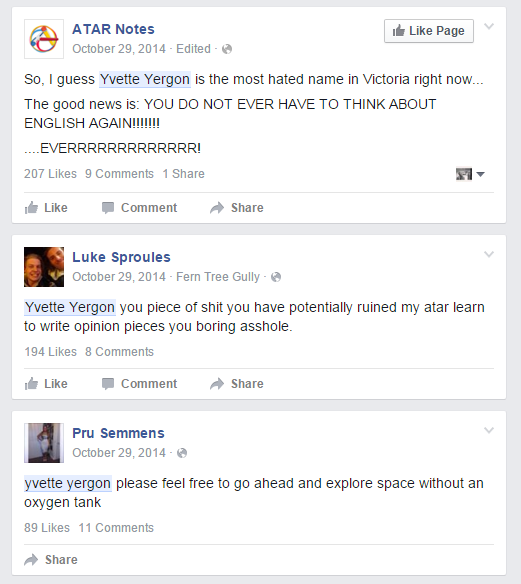 We’ll keep a lookout for memes, snapchats and parody accounts about this year’s unlucky author.

If only Crikey was open to running sensibly argued relevant important material it could be worth supplying them with it.