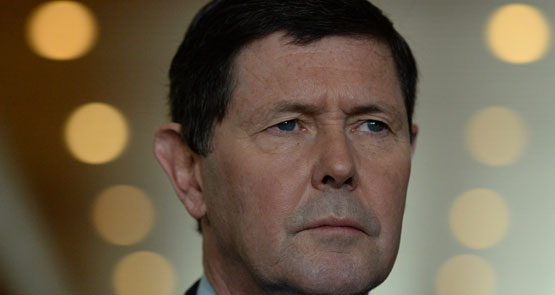 Kevin Andrews has stood up the World Congress of Families again, after confirming he wouldn’t attend its international conference in Salt Lake City, Utah, which runs from October 27-30.

It’s the second time Andrews has snubbed the controversial ultra-conservative organisation, and it’s beginning to sting. Andrews was due to speak at the group’s Melbourne gathering in August last year, and he initially said he would not be put off by the group’s somewhat … unorthodox beliefs. Wrote Crikey‘s Guy Rundle at the time:

“Families Minister Kevin Andrews will not be withdrawing from the World Congress of Families conference in Melbourne, despite revelations that the hard-right Christian outfit is hosting talks by speakers peddling spurious theories linking abortion to breast cancer, presenting homosexuality as a disease, and pushing the line that condoms do not help in achieving safe sex.”

But after public outcry (and Rundle’s article, which pointed out that at least one of those associated with the gathering claimed the gift of necromancy) Andrews pulled out at the last minute (we’re not sure how the World Congress of Families feels about that particular method). And now Andrews won’t be flying to Salt Lake City to speak at the group’s latest conference.

According to Babette Francis, who heads the WCF affiliate Endeavour Forum, Andrews, who is the group’s international ambassador, had been “very keen to distance himself” from the group because he was a minister in the Abbott government at the time speakers for this week’s international conference were being arranged.

“He was appointed by them as their international ambassador and we put it on our program,” Francis told Crikey. “His staff suggested we take it off.”

Andrews and his wife, Margaret, have regularly presented at the group’s international conferences since 1999 and spoke at the 2013 Sydney gathering alongside Russian oligarch Konstantin Malofeev, who was blacklisted under European Union sanctions a month later for funding pro-Russian fighters in the war in the Ukraine.

Andrews was awarded the group’s Natural Family Man of the Year award in 2014.

Registered speakers at this week’s conference include Rafael Cruz — the father of Republican presidential nominee Ted Cruz — who told a Christian men’s group that the US government was controlled by Satan and that a Democratic government would force churches to ordain homosexual pastors and conduct same-sex marriages.

Australians speaking alongside Cruz include Warwick and Alison Marsh of the Fatherhood Foundation, evangelical speaker Nick Vujicic and Francis.

Francis — who attended last year’s unofficial world conference at the Kremlin with the representatives of other conservative Christian lobbies (Peter Westmore of the National Civic Council of Australia and Theresa Martin of Cherish Life Queensland) — said there was much Australia could learn from Russian laws.

“The homosexual movement talk as if [Russian President Vladimir] Putin is criminalising homosexuality or putting them in prison or torturing them. This is all nonsense. What they said is they will not allow homosexual propaganda to be displayed in public, to minors. I think that’s a good idea.”

Francis, who is speaking on the beneficial and harmful influences of feminism at this year’s conference, was an organiser of last year’s regional congress in Melbourne. Protests led to its location being shifted five times and ultimately forced the Andrews’ withdrawal, along with the withdrawal of fellow Liberals senators Bernardi and Eric Abetz, and the then-Victorian attorney-general Robert Clark.

Andrews had been set to talk about the economic benefits of the traditional family model, and the dangers of non-nuclear family structures.

As an umbrella organisation for a range of affiliated groups, the World Congress of Families cites as key achievements the stymieing of same-sex marriage in Australia, shutting down gay pride marches in Europe and orchestrating Russia’s anti-LGBT legislation. The Russian laws resulted in a sharp spike in attacks on people identifying as LGBT and an apparent reluctance on the part of Russian authorities to prosecute offenders.

Much of the funding of the World Congress of Families comes from Russia. Several key donors have been the subject of sanctions stemming from UN investigations into war crimes, including Malofeev, pro-family lawmaker and convener of the Russian congress Yelena Mizulina, and the head of Russia’s rail network, Vladimir Yakunin, until recently a close aide to Putin.

Another key WCF figure and the organiser of the unofficial 2014 Kremlin meeting, lawyer and pastor Scott Lively, helped the Ugandan government craft legislation that enforced the death penalty for a range of offences, including touching someone of the same sex “with romantic intent”. Unable to move the ruling through parliament, the government settled on life imprisonment as an appropriate sentence, prompting international outcry.

The WCF covers the costs of speakers such as Francis for its international conferences, but “only because I’m a partner”, she said. “We donate to them more than the cost of my fares.”

There has been speculation that he could be given a diplomatic post to the Holy See. Andrews and fellow conservative Cory Bernardi have also been at the centre of speculation about a new right-wing party. But Andrews has yet to comment on his political future.

Crikey contacted Andrews’ office for comment but did not hear back by deadline.

All this controversy would be enough to turn a less natural mans hair grey..

Why should this chronic underachiever be awarded anything, much less a diplomatic posting to the Vatican?

It would be cheap at half the price to be rid of him to the Holey See, whereas he & his evil twin, Pell, can conspire vain phantasy.

Holy see, land and home of the kiddie fiddlers.