For refugees like Abyan, Nauru even worse than detention 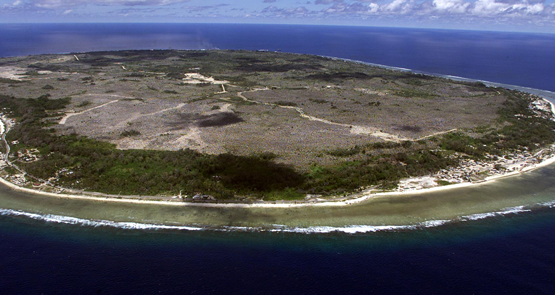 I spent the night of Christmas 2014 in a tiny room in a refugee camp on Nauru, surrounded by a scared group of 11 Somali women. I don’t know if the refugee known as Abyan was among them, although I suspect she was. These women crowded around, each desperate to tell her story of fear and abuse.

Beatings and attempted rapes had been reported to police and ignored. Local men had taken to creeping around the back of their guarded camp at night and banging on their windows. They told me they slept in their jeans.

Earlier that night, I and a photographer had easily slipped past the sleeping guard who was meant to protect the camp from such invasions. It was the same guard, said Majma, who had broken into her room and beaten her for moving a fridge.

“Even if you complain, this is our home country, this is Nauru,” he told her.

The Somali women are a separate high-risk class of refugee on the island — single women. Unlike the many Iranian families we met, all of them travelled from Somalia to Australia alone.

They spent a year and a half in detention centres in the middle of the island before being released into the Nauruan community, with only each other for protection.

They all said that, as bad as detention was, living in the community was worse and they wanted to return to the unsafe safety of their former prison. One told me she had made a formal request to the Australian Immigration Department to return to detention. The request was refused.

Two of them have since reported they have been raped, and on Tuesday the UN’s peak  human rights body found it necessary to intervene to protect these women under joint Australian and Nauruan care. In doing so, the Office of the High Commissioner for Human Rights (OHCHR) highlighted the reason refugees become even more exposed once released.

“Impunity for such serious crimes increases the risk they will be repeated,” said a spokesman for the OHCHR, which was created under a convention of which Australia is a founding member. “Women are also less likely to speak out if they fear reprisals and see little to no chance of justice being done.”

The spokesman said the UN body was “disturbed” by the rising trend of uninvestigated and unsolved allegations of rape on Nauru.

The Moss report has painted a picture of the hell refugees were exposed to as they waited in detention for their their asylum claims to be processed. Yet at least in detention there was the possibility of an independent inquiry. There will be no such investigation of abuses that occur under Nauruan jurisdiction.

The Nauruan government’s recent announcement that it intends to empty the detentions centres will move 600 more refugees from a situation in which they are abused with limited recourse, to one where there is no recourse at all.

History tells us that abuse flourishes within self-regulating communities. The Nauruan community is bound by familial and clan ties. These allegiances complicate the Western-style rule of law, represented by the island’s police force and government. Refugees have no place within these cultural protections.

When it comes to violence against women, the Nauruan nation has its own demons. By Nauru’s own admission, women in Nauru are increasingly subjected to violence from men.

“The majority of cases reported to police are withdrawn, and only a few get to have a day in court,” according to a government report to the UN.

It is in this context that Abyan’s traumatised distrust of Australian and Nauruan authorities appears clear and rational.

The UN spokesman said that the OHCHR had spoken with Abyan, whose desire to terminate her pregnancy in Australia was curtailed by a sudden and secretive deportation back to Nauru.

“She has refused to give information to the Nauru police about her attacker because she is understandably afraid of reprisals. She does not feel safe, given that her alleged attacker lives on Nauru,” he said.

The UN also cited the Nauruan government’s release to the Australian media of the identity of another Somali woman who complained of being raped by two men in September. In a situation where rapists know they will not be punished, this was not only a breach of her privacy, but also her security.

It is vital here to be sensitive to the Nauruan perspective. There is no excusing rape or rapists, nor police who appear more interested in protecting the perpetrators. But the original fault lies with Australia’s revival of the Pacific Solution.

The introduction of a proportionately vast foreign underclass, including women on their own, to a country of just 10,000 people was bound to have a hugely destabilising impact on Nauruan society. There was no way, without an overwhelming breach of Nauruan sovereignty, that Australia could oversee the protection of these refugees. As such it was inevitable that a system of institutionalised abuse would emerge.

This may reek of hindsight. But consider this. Eleven Somali women saw it coming last year, told the Australian government, and we turned them away.

All names have been changed to protect the identity of refugees.

Thankyou.
I have asked advocates from the previous Pacific Solution in 2000 if sexual asault and rape on this scale, existed.
No.
Of course there was a different cohort of people- women attached to families not alone.
When women travelling alone arrived on boats in 2012, the response of the immigration department was to instantly hide them. Many spent only a day or two on Christmas Island before being sent to Nauru. While the fight about the risks of sending unaccompanied minors- (teenagers without family) raged, under the radar, woman on their own were being shovelled into a”single womens camp” secretly.

As pressure built to employ more Nauruans, these women found themselves unprotected in tents with men roaming around the camp day and night authorised to touch them with scanners whenever they wished. At night the men, both local and FIFO’s from Australia and New Zealand, gathered around the women’s toilets so that no woman felt safe to go.Why was this allowed? Deterrence?

Men sat outside their shower cubicles controlling the water stop cock and making demands. This situation happened on the watch of senior immigration personnel, transfield, Salvation Army, Save the Children, Wilson Security.
Why did no one step in and say that this situation placed women at risk? Was this an acceptable deterrent?

Then released the women were placed in isolated huts in the bush in rooms with proper locks. Some were lucky to go to Anibare where there were guards and fences and more importantly Iranian family men nearby. Others were not and were threatened and those threats became reality and NOT ONE MAN-Nauruan or otherwise has been charged for the rape, assault, bashing and unmentionable sexual violence against these women.
ENOUGH.

I never cease to be horrified by that photo.
The guano mountain was infinitely preferable.

“The introduction of a proportionately vast foreign underclass, including women on their own, to a country of just 10,000 people was bound to have a hugely destabilising impact on Nauruan society.”

Good point Karl. Tony Abbott said something similar at the Thatcher event in the UK yesterday. And of course, risks of such outcomes are why most Australians favour offshore detention in the first place.

OneHand – are you seriously comparing the effect “of a proportionately vast foreign underclass, including women on their own, to a country of just 10,000 people ” with Oz of 23M?
Probably, because you are exactly that meretricious, demonstrated by your even more vile attempt to dog-whistle up the destabilisation of an EU of 350M+ absorbing less than 1% of that figure.
We can surely assume that, lacking though you may be morally, you can not be so mathematically challenged.

AR,
I’m just agreeing with Karl. A vast foreign underclass destabilises the society it lives in. Go to France and have a look.