Candidates have put their hands up for the new Nick Xenophon Team, but the party leader himself was not present, due to a "software glitch" with his diary. InDaily's Tom Richardson reports. 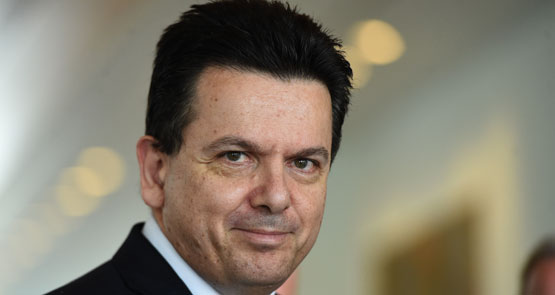 Two former independent candidates for state and federal parliament were among around a dozen attendees at the Nick Xenophon Team’s annual general meeting in Adelaide today, but the party leader himself was a no-show.

Xenophon blamed his absence on “a software glitch with my electronic diary that will well and truly not happen again”, after finding himself booked to speak at a steel industry event and a Carly Ryan Foundation function in Sydney.

He addressed the Adelaide forum by phone, telling the meeting his fledgling party had received around 450 candidate applications, from which it had now selected 29 candidates Australia-wide, with a dozen in South Australia.

Dr Joseph Masika, an African community advocate who ran as an independent for the SA Legislative Council last year, has confirmed he has “put his hat in the ring” for preselection, but says he is yet to find out if he has been successful.

“If they need my help I’ll be there, if they think I can contribute,” he told InDaily.

Also attending was Ray McGhee, a former Channel Nine reporter who quit the network in 2007 to stand as an independent in Boothby. He ran again in 2010, but he says he has not put his name forward for the Xenophon party in the forthcoming federal poll.

However, he said he would be interested in running against Liberal defector Martin Hamilton-Smith in Waite in the 2018 state election, if the Xenophon Team wanted him.

“I dislike people that run for one party and then ditch the party for their own benefits,” he said.

Hamilton-Smith told InDaily: “I’ve got every intention of running again so I’ll look forward to whatever may come our way in 2018.”

McGhee cut a distinctive figure in his television days, with his penchant for wacky pieces to camera. Asked if he remembered McGhee’s reporting, Hamilton-Smith said: “Not really.”

“All I’m focused on at the moment is trying to do the best job I can; I’ll worry about the next election closer to the day,” he said.

Also attending the AGM were Don and Kay Shipway, for whom Xenophon advocated after multinational sportswear giant ASICS stopped supplying their Adelaide-based Sports Locker store after a 30-year relationship.

But Xenophon told InDaily: “Just because someone turns up at the meeting doesn’t mean they want to be a candidate.”

He told the gathering by phone he was “quite certain there will not be an early election before Christmas”.

“That will give us more time to prepare,” he said.

“Many in Canberra thought there’d be a snap election, [but] it seems Malcolm Turnbull is settling into the job and consolidating his position … I’d be very surprised if there was an election before the due date some time in September [next year].”

NXT campaign manager and SA senate candidate Stirling Griff, who chaired the meeting, said the final list of candidates would likely now be unveiled in the first week of December.

“It’s been a very, very involved process,” he said. “There’s still some seats we haven’t filled yet … We may choose not to fill every seat.”

McGhee said Xenophon had “offered moral support” when he first ran in Boothby.

“I’m always keen on the independents,” he said. “I’m not a fan of big parties… I don’t like the career politicians, they’re there for themselves.”

He says he hopes Xenophon would continue to operate “as an independent” despite the new party structure, and says other candidates should have the right to dissent on matters of principle.

“If someone objects strongly, they’ve really got to have the right to go that way, even if it goes against (the party),” he said.

“They should be able to vote as they wish without any ramifications.”

He said his experience in Boothby had persuaded him the southern seat was “too big” to tackle as a lone independent.

“You need an army of several hundred to even start the process, and then you’re running against the Liberal Party that have been there since Adam and Eve,” he said. “It should be interesting this time round with the member (retiring incumbent Andrew Southcott) not running … I think it will change the landscape.”

Masika said he was drawn to the NXT because “there’s no tie to a certain particular ideology”.

“What the team does is look at issues on their own merits,” he said.

“In other political parties, they have an ideology [and] if you don’t follow that line you find you are [left on the] outside. With Nick you find out what’s the issue, what’s the evidence available … and come up with a solution which is win-win for everyone.”

Poll Bludger: SA byelection a canary in the electoral coal mine for fed Coalition

Wilkie: Gillard’s backroom deal — and how she betrayed me

The campaign cashpoint pays out