Anyone want to invest in the Yellow Pages? ... Victorian Labor makes a deal ... too many words, Mozart ...

Call Bronny. Aside from the massive history revisionism going on in The Reith Papers, to be detailed in Crikey soon, Peter Reith also gives a brief look into the Howard government’s plans to privatise Telstra. Reith notes that before the 1996 election, the Coalition was gearing up for a negative campaign from Labor over plans to privatise the telecommunication monopoly, led by then-shadow minister for privatisation Bronwyn Bishop.

“I was told later that a worst-case scenario of Labor’s scare campaign on privatisation was a folder, red with white lettering, that said on the outside, ‘I will privatise Telstra, says John Howard,’ and on the inside it says Bronwyn Bishop will be in charge of the sale. Apparently this evoked a very adverse reaction.”

Despite, as Reith notes in the book, the success of the floats of Telstra over his time in Parliament, the decision to privatise Telstra has plagued successive governments because, well, NBN wouldn’t need to be buying up all of Telstra’s copper lines if the government had opted to keep the fixed-line infrastructure as a separate wholesale company split from Telstra’s retail business. But that would have meant a much lower share price, and much less money for the government.

Perhaps ultimately, the decision to bundle up and sell off Telstra as a whole company would have been the better one for the government. Reith notes that if the government were not able to get the privatisation of Telstra through the Senate in August 1996, it would have had to sell off the company in pieces:

“If we don’t get one-third Telstra sale through, then we’ll sell it off in bits — e.g., Mobilenet and Yellow Pages.”

Breaking up Telstra into individual business units for sale might have seemed like a good fallback option in 1996, but the Howard Battlers who opted to invest in the then-much more profitable Yellow Pages advertising business (which has struggled since the internet became a thing, and Telstra has now sold it off) over the then still newish mobile business (which is now Telstra’s biggest money-maker at 41% of product sales revenue as per last financial report) would be feeling very sorry for themselves.

Gagging for it. In yet another round of “why are gay people opposed to the government paying people to tell them they’re not equal?”, conservative Nick Cater has written an op-ed in today’s Australian arguing that the only reason Labor and others are opposed to a $150 million plebiscite is that they want to silence debate. Using a tired George Orwell analogy, and downplaying the suicide rates of young LGBTI people, Cater argues that marriage equality is denying the “equal right” of people opposed to same-sex marriage to argue their opinion, as though their argument hasn’t been aired over, and over and over for the more than 10 years since the Howard government changed the Marriage Act without going to a plebiscite first.

Ms Tips couldn’t help but notice in Cater’s final paragraph he was decrying the “contrived” arguments by those opposed to a plebiscite to “justify gagging pubic opinion”. Freudian slip, or devious sub? 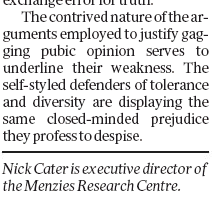 Victorian state Labor stablises. The Victorian ALP has had a stability pact in place since 2009 to reduce factional fighting and branch-stacking, but the stability pact was up for renegotiation in July this year with the Right of the party said to be reunifying and an empowered Left seeking more acknowledgment of its growth in the pact. Ms Tips has heard from multiple sources that three months on, the pact has now been finalised. A spokesperson for the Victorian branch of Labor did not respond by deadline.

We’re not clear on the detail, or winners and losers out of the new pact, so if you know more, please tip us off! And you can stay anonymous.

Powerful alumni. Yesterday Ms Tips noted that while David Gonski was a guest at Malcolm Turnbull’s 61st birthday party, Turnbull has been noticeably silent on the funding for the Gonski reforms (concerning because there’s no agreement in place to finance the reforms beyond 2016). A tipster got in touch to give us a bit more detail about Gonski and Turnbull. It’s not surprising that Gonski was at Turnbull’s bash, our tipster says. For one, they’re close neighbours — they live a house or two away from each other on the water, and they’ve known each other for more than half a century to boot. “They were at Sydney Grammar together,” our tipster said. “David was class of ’71 and Malcolm ’72.”

Great yarn, wrong category? The Walkley nominations are always fiercely contested, and it’s not uncommon for journos to run the ruler over the nominees to see if the judging committees made the right choice. A Crikey tipster has been doing that quite literally, pointing out to us that Patrick Carlyon’s Sliding Doors feature, which ran in the Herald Sun, is somewhat longer than the 4000-words-and-under feature-writing category it sits in. We checked the online story and got 4185 words, not counting the title. The other two nominees, Trent Dalton and Kate Legge (both nominated for pieces in the Weekend Australian Magazine), submitted pieces with word counts of 3983 and 3796, respectively.

We wondered if there was a bit of leeway with word counts, but that’s not the reason Carlyon fit the category, according to the Walkley Foundation. Turns out he submitted the print version of his piece, which was slightly shorter than the one that ran online — 3885 words.

Where’s Tony? In his first tweet in 41 days, former prime minister Tony Abbott appears to be enjoying a European holiday, taking his wife, Margie, to Hadrian’s Wall in the north of England. The timing of the tweet is intriguing as it arrived shortly after a story in Rear Window in The Australian Financial Review that suggested that while the Abbotts are on a privately funded trip to Europe to give the Margaret Thatcher Lecture in London, Tony has also brought along his former chief of staff, Peta Credlin, and several other advisers. This is not the first holiday Abbott has taken with Credlin, and his fondness for holidaying with Credlin was something Turnbull backers were often quick to point out as they did the numbers before the leadership change. 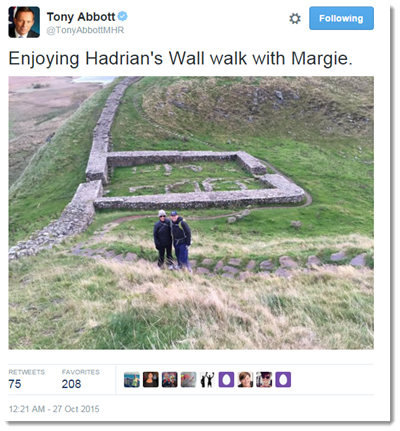 What on earth is structural separation?

Telstra’s tantrum leaves it out in the cold

When the Commissariat writes about, “the massive history revisionism going on in The Reith Papers, to be detailed in Crikey soon,” it’s probably far too much to expect the promised ‘analysis’ might display a modicum of skill in such relevant areas as language, logic psychologically soundness?

Oh dear, the Telstra files. But let’s apportion blame appropriately. Beazley made the call not to split the company into wholesale and retail while Labor in office, and IIRC, Keating was not happy. A terrible decision.

Howard, and Reith and associated idiots, then sell the lot instead of breaking it up first, compounding the first terrible decision, and ensuring it can’t be undone. Thanks guys.

Now, we are paying over the odds for outdated and sometimes decrepit copper, and what we are rally paying for is to break up the telstra monopoly.

Nice investment, great policy, another Howard era reform that is being undone at great cost.

Does Abbott ever pay for anything himself?

My god Peter Reith has resurfaced, havent we suffered enough lately with Abbott for two years? This is torture, I would rather be water boarded than read anything Reith has written.
I have to say though that I made $100,000 after buying Telstra shares in the depths of the GFC and selling a year ago.

Ken, while I’d be grateful had I “suffered” similar financial outcomes recently, I still couldn’t imagine making your waterboarding comments.
Although I’ve been a Labor worker and activist since well before most of our current crop of Labor (sic) leaders were even conceived, I must concede that Reith has less about which he can be criticised than those on our side of politics.
But the Crikey Commissariat shares your perspective, so you’re among temperamentally compatible here in Crikey Land aren’t you.