Where's the Tele's front-page story? Plus other media tidbits of the day.

Where’s the outrage? Readers of The Daily Telegraph were ready to be appalled this morning by a front-page “ANTHEM OUTRAGE”, which promised a story that Muslim students had skipped the singing of the national anthem at a primary school because they were in a month of mourning and were not supposed to take part in “joyous celebrations” (we think that might be giving Advance Australia Fair a bit too much credit, but that’s neither here nor there). 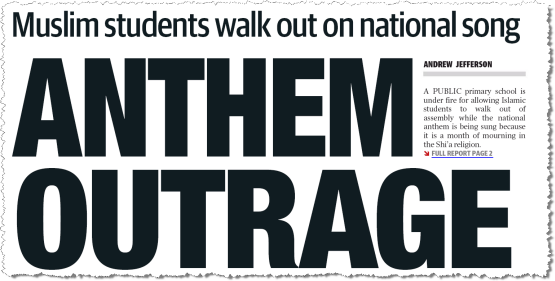 In the edition Crikey saw, a full report on this assault on Australian values was promised on page 2 of the paper. But then … crickets. Page 2 contained three stories (one on Bluescope, one on the child abuse royal commission and one on the arrest of an alleged Indian mobster), but not a peep on the Muslim student walkout. We searched the entire paper and came up with bupkis.

Was the Tele so outraged by the affront that they could not even bring themselves to deliver the full story? We asked the Tele but got no response. But Sydney-siders tell us the mistake was rectified in later editions, where the story did appear on page 2. Thank goodness … 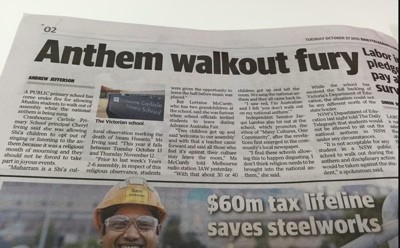 If you really want to know what happened with the schoolkids, the whole thing is online. It includes a quote from one outraged grandmother, and Jacqui Lambie has got involved, which always makes everything better … — Cassidy Knowlton

Eric sings the blues. Here at Crikey we thought that Eric Abetz was being unfairly attacked as racist for using the word “negro” to describe Justice Clarence Thomas during a discussion same-sex marriage. Dimwitted, yes, but racist? Nooooo. Well kinda, when you hear him saying it. “Clarence uh Thomas, the NEGRO uh American on the Supreme Court …”, although the huge emphasis appears to be a product of the Taswegian’s distinctive uh diction.

He did have one defender, however. Gerard Henderson turned up on The Bolt Report to argue that “well, it’s a term not much used now, but people still say negro, they still talk about negro music …”.

Negro music? Really, Gollum? What sort of hootenannys and speakeasies are you trawling these days? A quick google reveals that the term “negro music” gets many many hits. Sadly, most of them are JSTOR listings for articles written in the period between 1900 and the 1930s (when the term “negro music” was replaced by “race music”). There are current uses of the term, however! Sadly they’re from Spanish, where “negro” means, erm, black. No, using the term “negro” isn’t racist. It merely shows that you haven’t read, or thought, or paid attention to anything said about it in the last 40 years. Which makes you lazy, complacent and self-satisfied, Eric. Does that count as atheist bullying? Maybe you should sing us the blues then. In the meantime, Gollum, try harder. — Guy Rundle

Legal acrobatics. In the wake of last week’s extraordinary Four Corners, many wondered why Michael Lawler was doing this when he recorded phone calls with his boss and others … 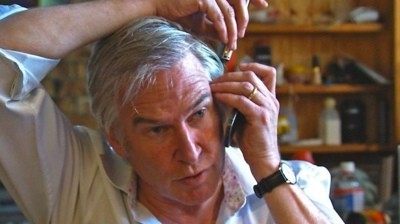 “People felt it was a bizarre yoga move when he was holding a phone. But it’s something he was doing deliberately. Due to federal legislation you don’t have [the] phones touch, and you don’t have a cord or recording device that connects the two. That’s how he says he got around that.”

State legislation around recording phone calls without someone’s knowledge says you can make the recording for reasonable protection of your lawful interests, Meldrum-Hanna says. Which explains the above picture …

Was Four Corners worried it was broadcasting people who were mentally ill, Aedy asked later. Meldrum-Hanna says Lawler and his partner, Kathy Jackson, were regularly consulted about whether they wished to continue with the documentary.

“Every day the team would sit after shooting and we would discuss what we thought, and how they were, and we were careful on every day to ask them how they were. We had several conversations that were … ‘if you want to stop, we stop’ …

“If at any time we thought they weren’t in a reasonable mode or in control of themselves, we would leave for the day.”

Al Jazeera too nasty-sounding. The former journalist who strategised the campaign to free Peter Greste says she decided to play down the fact that he worked for Al Jazeera, as the network’s Arabic name might turn off Australians. In comments reported by Mumbrella at the PRIA national conference, Heidi Ross said:

“The challenge we had was nobody knew who Peter was. He worked for a network that began with ‘Al’ — Al Jazeera– it sounds nasty, it sounds Arabic, it sounds like it’s linked with terrorism.”

“In all our press releases we didn’t use the word Al Jazeera. We talked about his colleagues. That was also helpful for us to push the message that Peter was an ordinary guy and just a journalist doing his job.

“It helped for us to get that through to politicians because they could argue it cleanly without the Al Jazeera clutter and helped give them grounds that he should be extracted and he was just caught up in someone else’s mess.”

Video of the day. The new anti-pokies lobby used reactions from the airing of last week’s KaChing: Pokies Nation in its newest video ad … 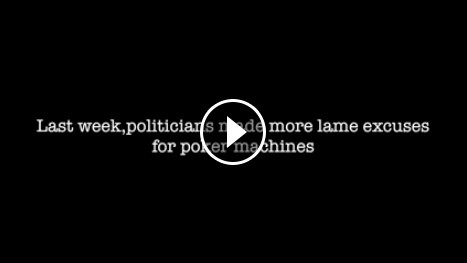 Front page of the day. No front page today, we just suggest those with a copy of the Fin turn to page 46. Rupert Murdoch as you’ve never seen him …

Get your Abtez on … “And they…’re racing …. One of the best to begin is Gollum’s Ring … just in front of the bolter …. Andy Rorschach….”

Hi Rais. We reproduce front pages all the time because they’re marketing for the papers (and so we figure the rules around copyright are looser), but I thought reproducing a cartoon was probably going a bit far! Hence the coy reference to turn to the Fin. But point taken about not many readers not having a copy.

I was impressed with the gymnastic circumlocutions the campaign went to in referring to Greste as “ex/former BBC & ABC reporter/producer.”