We agree with Chris Kenny

Last week, former Coalition staffer Chris Kenny became the first Australian journalist in nearly two years to be allowed into Australia’s detention centres on Nauru, where he tracked down “Abyan”, the Somalian refugee at the centre of what is unfolding as one of Australia’s most horrifying episodes of refugee mistreatment (and there’s plenty of competition […]

Last week, former Coalition staffer Chris Kenny became the first Australian journalist in nearly two years to be allowed into Australia’s detention centres on Nauru, where he tracked down “Abyan”, the Somalian refugee at the centre of what is unfolding as one of Australia’s most horrifying episodes of refugee mistreatment (and there’s plenty of competition for that title).

As Crikey reported on Thursday, Kenny’s account of his interview with the woman differs markedly from that of her Australian advocates. But Kenny has now doubled down on his version of events.

In a wide-ranging piece for The Australian today, in which he calls his critics “tacky” and “disgraceful”, the former Howard-era chief of staff paints a picture of Nauru as a kind of island paradise, where refugees live happy, productive and free lives. Kenny writes:

“There is no longer any detention on the island; refugees and asylum-seekers either live in the community or in centres from which they can come and go as they please … Child abuse won’t leap out at you but the zest and health of the children, the openness of the parents, and the first-name exchanges they have with the guards provide reassurance.”

It’s the Australian media, Kenny argues, who have it wrong.

“ … with no outsiders coming in, all that gets out is complaints designed to undermine offshore processing. Refugee advocates and journalists run anonymous and unverified stories.”

We can’t imagine why Australian journalists would resort to anonymous sources to report on this issue, but regardless, we agree wholeheartedly with Kenny on this point: “Secrecy only makes the situation worse … Nauru would do better to let [journalists] in.”

“What Abyan needs is medical counselling to decide what is best for her, and the government to assist her in that course of action,” Kenny concludes.

This is exactly what her Australian-based supporters have been calling for. Kenny should use what influence he has within the Australian and Nauruan governments to make sure it happens, and promptly.

Where in the world is Bernard Keane? 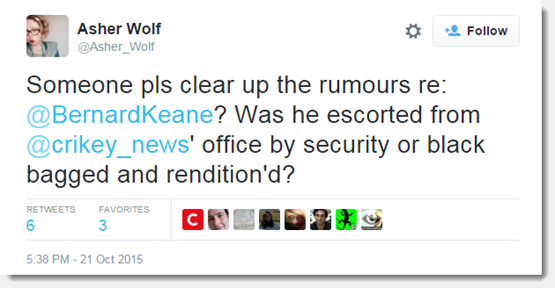 Reports of Bernard Keane’s rendition are an exaggeration. We’ve had a number of emails from readers asking if Bernard and Crikey have parted ways. Never fear — our prolific politics ed is just taking a well-earned break and will be back in your inboxes in a fortnight.

Let in what MrsT called “..disinfectant, the oxygen of publicity!”
I remain to be about BK.

..as well as “..remain to be convinced about BK’s well being.”