What does Joe Aston's penis do on a flight to Hong Kong? Thank goodness, we have the answer. Plus other media tidbits of the day

The Sydney Morning Herald and the Age ran the first extracts from Paddy Manning’s new unauthorised biography of our new prime minister, Born To Rule. The extract detailed how Turnbull undermined, with no attempt at subtlety, then-opposition leader Brendan Nelson’s leadership of the Liberal Party in the early days of the Rudd government. But Saturday, September 24, was Malcolm Turnbull’s birthday. He turned 61 and celebrated by giving “exclusive” interviews to just about everyone in sight. The avalanche of copy rather drowned out Manning’s revelations. Not that that could have been the intention, of course.

To The Guardian, with Lenore Taylor and Katharine Murphy, Turnbull promised a pragmatic government unafraid to “chuck out” bad policies. To the Herald Sun‘s Ellen Whinnett he spoke of a potential $11 billion investment in Melbourne Metro. In The Daily Telegraph he was pressed (by Daniel Meers) on a delay in new terror laws.  To Fairfax, with Peter Hartcher and Mark Kenny, Turnbull declared himself a “reformer”. To the Weekend Australian’s Dennis Shanahan and Paul Kelly in an “exclusive interview“, he spoke of a plebiscite on same-sex marriage and of curbing union corruption. The Financial Review’s Phil Coorey and Laura Tingle asked about the budget balance.

Almost every publication labelled its chat with Turnbull an “exclusive”, except for The Financial Review. Admirable restraint, that … 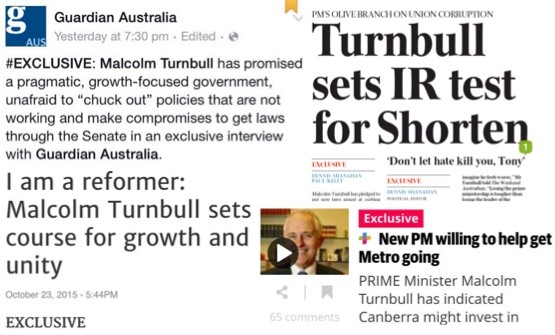 Unlike Tony Abbott, Turnbull has made a point of not favouring one outlet over another — the drops to The Daily Telegraph have halted, to the relief of the gallery. Though one can’t assume they’d have been thrilled to all be given interviews so close together. — Myriam Robin

Gather your pitchforks. Relations between The Daily Telegraph and the Daily Mail, already tense after the Mail revealed the winner of The Bachelorette before the finale, have not improved over the weekend.

Things took a decidedly nasty turn over the weekend, with news.com.au editor Daniel Sankey declaring in this morning’s Australian the Mail had hit a new low.

Here’s what happened. On Saturday the Mail paid a snapper for photographs of Bachelorette runner-up Michael Turnbull speaking to a brunette. “Heart mended already” was the general angle. As it turned out, she wasn’t just any brunette, but Vanessa Brown, a lifestyle reporter with News Corp.

“News.com.au can exclusively reveal that Turnbull’s ‘unnamed companion’ is none other than our lifestyle reporter, Vanessa Brown — who says she made clear that she was at the scene in a professional capacity when quizzed by the photographer.

“That being the back lot of the Channel 10 studio, where our journalist was conducting prearranged interviews with Turnbull and fellow Bachelorette rejects Richie Strahan and Alex Cameron ..

“The Daily Mail Australia became the most hated website in the country after it published photos of Frost and Mielczarek inside a Sydney hotel room on Thursday afternoon, spoiling the result for fans who had waited five weeks to find out who she had chosen.”

The Daily Mail amended its story with the line:

“It has emerged that the brunette was a young reporter who was on the job for another website, who despite being embedded with The Bachelorette failed to break an exclusive story throughout the entire series.”

This act of villainy brought a rebuke from Sankey, who writes in today’s Oz:

“They chose to issue a personal attack on our News.com.au journalist to cover-up their error, printing yet another lie which called into question the credibility of our reporter.

I’m absolutely furious that the Daily Mail would personally attack our reporter in a bid to cover up the second major blunder it has made in its ‘coverage’ of The Bachelorette.

Brown was not ’embedded’ in The Bachelorette. In fact, covering The Bachelorette has never been part of her brief. She was commissioned on Friday to interview the runners-up — simply to assist news.com.au’s entertainment and TV writers, who’d been working through the night to bring stories to our readers after The Bachelorette finale had ended.

I find it completely despicable that the Daily Mail would stoop to printing complete lies about our journalist when what they should have in fact be doing was apologising to their readers and admitting they’d made a mistake. Instead, the Mail chose to engage in petty, childish one-upsmanship.”

For what it’s worth Ten dropped its injunction against the Mail’s spoiler story late on Friday, saying it had served its purpose.

“The outstanding success of The Bachelorette Australia finale confirmed the action. The Supreme Court has appropriately sanctioned The Daily Mail, as has the court of public opinion.”

And that concludes today’s edition of “this day in media feuds between gutter tabloids about the results of a reality show that does not at all matter”. — Myriam Robin

A note on standards. Crikey enjoys its position as one of the few outlets where people can say rude words without being censored, but we note the growing competition in that arena in recent days.

First came last Monday’s Four Corners, during which Michael Lawyer uttered, un-beeped, the rather inventive “cunt-struck” comment (he was talking about whether or not he’d been unduly influenced by his partner, Kathy Jackson, and he swore he wasn’t “cunt-struck”). We had barely recovered from that when, in the Fin’s “Adventures of Joe Aston” Saturday column, the scribe had this to say of being seated next to a “reprehensible” woman reading Who:

“Instead, I wake several hours later with a pitiful, forlorn erection – if you could even call it that – protruding, barely, through my blanket. Must be the cabin pressure.”

The column’s often a bit of a wank, but honestly this is too much information. The rest of it notes the contents of Aston’s charming weekend in Hong Kong, which, from what we can tell, consisted mainly of him drinking too much and promptly vomiting it all up.

The Weekend Financial Review has a new editor next week after Matt Drummond left the building on Friday for GQ. We can only hope or or she lays down some standards. It’s the goddamn Financial Review! — Myriam Robin

Video of the day. Michael Danby accuses the ABC and others of one-sided reporting on Israel on the Bolt Report … 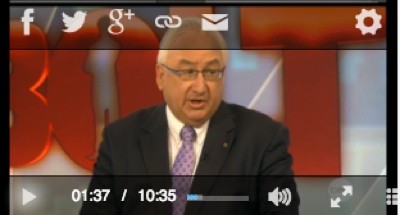 I kid you not.

And yes, I know that google accepts ambitiousness, ‘having ambition etc.

The fell tide of neologoisms sweeping all before it as a noun is adjectivesed and then the new is re-nouned. Come back gerund, all is forgiven. Not.