Rundle: the deeply sinister reason Israel is suddenly absolving Germany of the Holocaust

Why has Benjamin Netanyahu suddenly suggesting the Holocaust might have been the fault of the Palestinians? 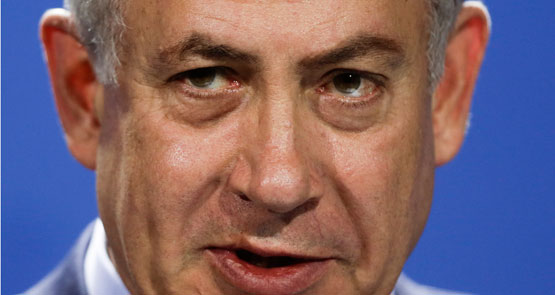 The news started circulating through Twitter late Wednesday afternoon: “Netanyahu blames Grand Mufti of Jerusalem for Holocaust, says Hitler only wanted to deport Jews.” One blinked and looked at it twice, waited to see if it was a hoax or beat-up of what were likely to be some pretty nasty statements in any case. No, there it was. Israel’s Prime Minister claimed that the Mufti, the ruler — more or less — of Arabs in Palestine from the 1920s into the 1940s, had objected to a plan Hitler had to “deport” all the Jews, saying they would come to Palestine and overwhelm his people. What should Hitler do instead? “Burn them.” Thus the Nazis are partly off the hook: at its root, the Holocaust is a Palestinian creation.

Netanyahu’s remarks have been widely described as “bizarre”, and of course they are. He joins the “at least Hitler …” club, whose most recent member is Tony Abbott, and whose founding member was David Irving, the historian who once remarked that Hitler was “probably the biggest friend the Jews had in the Third Reich, certainly when the war broke out”. But Netanyahu is the head of a state founded on the idea of a Jewish national home, its actual existence arising from the Holocaust. What’s going on?

One thing he’s doing, at least, is the “dead cat on the table” move — say something as outrageous as possible, and have two effects: 1) stop us talking about something else, i.e. the renewed violence on the ground, and the heightening of repression and murder by the Israeli state, and 2) make people clarify the falsehood of the statement, and thus give it some concreteness. That second one is working a treat at the moment as news organisations all over the world scramble to give a potted biog of the Grand Mufti and clarify that, though he was unquestionably viciously anti-Judaic, he does not get credit for the Holocaust — which can’t help but suggest that the idea was in some sense plausible. It wasn’t, and isn’t, but the history of it is fascinating enough to play the “dead cat” game — and also tells us something about the shifting politics and identity of Israel and Zionism.

When the Holocaust emerged as a concrete historical thing in the years after World War II — for some time it had simply been tangled up as part of the greater slaughter — it was generally constructed as an act of deep intent by the Nazis, with a wealth of evidence to back that up, starting with the exterminatory rhetoric in Mein Kampf. However, from the time of Adolf Eichmann’s capture and trial onward, a counter-narrative took over, one that emphasised process, and the amoralism of a war and terror machine clanking on, its functionaries desperate to please a dictator. This revised conception picked up the various schemes mooted to make Europe Judenfrei, non-lethally: forced resettlement in Uganda, Guyana, Madagascar, etc. The argument that arose from this was that the Holocaust arose as a “final solution”, because all other “solutions” had failed — the war had made it impossible for Germany to expel the Jews en masse. Some historians made pains to emphasise that this process account did not lessen the radical evil of the Holocaust; some, coming from the German right, were less fussed.

Whatever truths this uncovered about the complexity of Nazi-Jewish relations in the 1930s, it has been largely debunked in the last 10-15 years. Various schemes for mass deportation were proposed to Hitler and the higher command, but they showed little interest in them. The argument seeks to downplay the sheer degree of genocidal imagining there was concerning the Jews in early 20th-century Europe, a mix of anti-Judaism, social Darwinism, eugenics, social “hygiene” movements and the like, fused together with the rawer eastern European hatred of the pogroms. It also plays down, as Timothy Snyder’s recent work reminds us, the sheer obsessive focus of Hitler’s exterminatory anti-Judaism, to which we have become so accustomed, that we are perhaps inured, too, thus allowing the “springtime for Hitler” argument about his alleged preference for deportation (“der Fuehrer was sooo gentle …”) to be revived.

Netanyahu’s claim fails the most basic tests: the exterminatory state structures had been in place since the ’30s, used on criminals and the mentally ill; the Wannsee “final solution’ conference had already occurred; and the Holocaust had begun, in the pre-gassing phase, with more than a million Jews and other groups murdered, largely by mass shootings. Netanyahu’s use of the Mufti’s alleged comment that the Jews should be “burnt” is obviously intended to bring to mind gassing, batch killings and burning in ovens. But more people were murdered in the Holocaust by shooting and burial than gas. The focus on gassing is a feature of our obsession with the “grotesquerie” of the Holocaust, which is often presented as a reflection on its evil.

The obvious intent of the remark beyond creating furore — to suggest the Palestinians are to blame for the Holocaust and thus getting what they deserve — is so obviously absurd that many might wonder how it could even work as a piece of chutzpah. The answer is that there is a desire buried deep in the bosom of right-wing politics to remove the Holocaust from the heart of 20th-century history for an obvious reason: the single most radically evil act of racial genocide in modernity was committed by Europeans on Europeans. The civilisation that defined itself as the standard against barbarity, and thus morally licensed imperialism, had committed an act that not even the most brutal non-European movement or people could countenance.

Zionism as a movement was founded on the intimation that this sort of brutality was in the offing. Sparked by the Dreyfus affair it was a final decision that assimilation, etc, would never create a genuinely Judeo-Christian civilisation in Europe, that the age-old attempt by Christianity to tear out its Jewish roots would take a darker turn, and that a non-European Semitic land must be created. The role for the “other” Semites, the Arabs, was to be one of paternalistic domination and education, but early Zionists saw themselves as entering a future where they would be bound up with them — certainly more closely than with Europeans, and that Zionists would de-Europeanise as the land developed.

That conception was ended with revisionist Zionism of the ’20s and the idea that an “iron wall” should be erected between Jews and Arabs, or that the latter should be a permanent minority in an Israel on both sides of the Jordan. But it was only when Israel came to be laced into a US and Western alliance thoroughly that any notion of a Semitic affinity was abandoned for a re-Europeanised conception of Israeli Judaism. That re-Europeanisation — hell, a re-rendering of Israeli Jews as white — has been deepened year on year by the arrival of US fundamentalist settlers; of east European Jews with a non-Semitic racial/cultural heritage; of the collapse of a secular Palestinian resistance back into Islamist ones, as Israel becomes a global high-tech state, rather than the socialist agricultural one originally envisaged; and by the shifting axis of the world, whereby states like China and India, not likely to look generously on European-derived imperialist projects, take the world lead.

God knows what Netanyahu really thinks, but it’s this re-Europeanised background that would make the notion that the Palestinians started the Holocaust as psychologically plausible, at some level, in any number of listeners. A more extended treatment would look at the way in which it has some very nasty antecedents indeed, in the increasing attraction that revisionist Zionism (the roots of Likud) had for fascism and Nazism, and the deeply disturbing regard that some ultra-Zionists, such as former PM Yitzhak Shamir, in his terrorist days, had for the “will” and “resolve” of racist totalitarianism. A ghost of that appears to be arising.

No reason why it wouldn’t, as, in the current heightened tension and violence, Israel becomes a more explicitly apartheid state, with lockdowns on all Palestinians, shoot-to-kill on a mass scale — and a brutal and atomised Palestinian campaign of stabbing as acts of political terror. As that proceeds, all trace of de-Europeanising Zionism leaches away; what becomes uppermost is its European colonial character (one reason why Africans, including African Jews, are copping increased public racism). What makes it really alarming, of course, is what it might be acting as preparation for. If you start talking about the man who tried to murder your whole people as someone who “only” wanted to deport you, what are you trying to say about the morality of mass deportation? Especially if the people who might be on the receiving end of that are those you now, absurdly, cynically, derangedly, blame for deportation “becoming” genocide?

Ministers on blast for racist comments

Thanks Guy. Great summary. I don’t think many still understand that the majority of those killed by the Nazis (and the Soviets at the same time) died outside the death camps. (Timothy Skinner’s ‘Bloodlands’ a breakthrough history). And that deportations were a consideration of some kind for the Nazis until – was it 1941/42? I understood a bit more about Netanyahu’s Revisionist Zionism (as opposed to the socialist vision strand of Israel history), when I read his father, Benzion, was Private Secretary to Ze’ev Jabotinsky, a serious Revisionist and clear proponent of the removal of Arabs from both banks of the Jordan from way back (which militant Zionist groups like the Irgun were meant to hasten). Benzion Netanyahu was, among other things, an historian at Cornell University. Reading a summary of his father’s ideas outlined by Benjamin Netanyahu, one can see that the Arab political ‘problem’ in Israel could seamlessly be revised to be THE major historical problem facing Israel – not the European holocaust. This could gain credence by those who don’t know much about Islamic history but nonetheless accept it’s always been nothing but militant. Netanyahu’s recent comments have taken this to another level. Meanwhile back in Palestine/Israel the secular PLO has lost credence with most Arabs, with considerable Israeli ‘assistance. One can only ponder what seriously militant Islamists could very well gain in Palestine/Israel over time: this one-time sanjak in the the Ottoman-created vilayet of (Greater) Syria, which also included Lebanon and, of course, a now very battered Syria.

Sorry, error in previous post: Timothy Snyder is author of “Bloodlands”, as outlined by Guy.

Each day that passes sees Benjamin Netenyahu appearing to be a twin of ex-PM of Australia, Tony r’Abbott, the only thing that differentiates between the pair of them is that the latter doesn’t wear a yamulka.

At Kiryat Shmona kibbutz, pre the 67 war, it was already apparent that the original concept of a secular Jewish homeland, of which the kibbutzim where the exemplar, was on the way out.
Although far from pacifist, they would not have pissed on Bibi in his current form.

Venise – make them triplets with Putin.