Razer: how a culture of ’empowerment’ ruined Amy Schumer

Amy Schumer used to be funny. Then she met Judd Apatow, and her edge became dull. 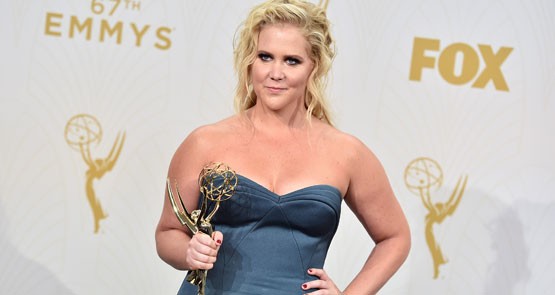 Comedian Amy Schumer is funnier than hell. Actually, she’s funnier than that waiting room in hell where comedians prepare to prove to Satan that they have earned eternal damnation. She’s the blonde busting out of her chemise, texting Joan Rivers in the Seventh Circle to run through a version of The Aristocrats and check that the abortion material is sufficiently taboo for the Dark Lord’s taste.

For the past few years, Schumer has gone to the edge, transgressed it and landed herself in the gulch of good taste with legs up and a discount Brazilian in bulging view. In the best tradition of stand-up, she has delivered routines that sell a hopeless soul. Like Richard Pryor, Jerry Seinfeld, Rivers and all the un-save-able greats, she built a persona that could neither be redeemed nor offer us redemption. Then she met Judd Apatow and tragically ascended to heaven.

In deed and, most troubling, in performance, Amy Schumer has become “empowering”.

There are those who enjoy Comedy With Heart, and good luck to them. Some audiences truly enjoy a moral presentation and this, we must suppose, is the only reason for Jay Leno’s obscene longevity. Lucifer knows, the guy’s not funny, but his friendly shtick served for many years to send Americans to sleep stuffed with the syllabub of “understanding”.

Then there are those who enjoy Comedy With Bite, and this audience deserves less patience. For mine, the illusory “edge” of Andrew Dice Clay, Daniel Tosh or the insufferable Bill Maher is a far milder artistic bet than even the worst of PG13 comedy. While Leno’s heart-warming tales of family served to freeze the ideological bias of an audience on the edge of sleep, the reeking libertarian ooze of Maher is a bigoted dream that simulates total wakefulness. This dullard, and his mate Daniel “Rape Joke” Tosh, absolutely play to a dominant morality. It is not unusual to think that women have become a little uppity these days, and it is hardly a new or a dangerous thing to suggest that the Western world has become enslaved to mild language. Of course the Western world has become enslaved to mild language, and Dice and Tosh, despite their frequent references to rough back-door sex, are as guilty of it as the cleanest liberal comedian. There is and there can be no artistic valour in “saying what everyone’s thinking”.

It is the great comic’s work to say what no one is thinking. This, in its most basic terms, is the foundation of an exceptional joke. Those of us who admire the great American artform do so for its capacity to offer us a vision of reality precisely as it isn’t. It would be naive, of course, to think of comedy as a revolutionary force and ridiculous to assess it in these terms. Comedy, despite what enthusiastic new fans of the middling old periodical Charlie Hebdo will tell you, is not dangerous. It is, however, somewhat necessary unreason in a culture like the West where we must go about pretending that we’re reasonable.

Tosh never dares touch the incredulous confusion that is the bedrock of great comedy. He is always as sure of himself as was Jay Leno. To stay sure of himself, he plays to the ethics of an audience who will thank him for “saying what everyone’s thinking”. By these means, the audience can believe themselves to be the true guardians of the very best morals and that is every bit as “edgy” as a kumquat.

Artists like Sarah Silverman or Doug Stanhope produced thought of which we were otherwise incapable. I do not enjoy Stanhope’s defence of arms ownership and I have no particular fondness for the idea, advanced in the past by Silverman, that some women aspire to be raped. But I admire the shit out of their absurd logic. They are not telling “truth”, and none of us is ultimately convinced that either sexual abuse or death by firearm is defensible. We are, however, convinced that thought and morality outside usual conventions is possible.

Broadly speaking, this prospect of transgression is what turns some of us into comedy nerds. It’s not necessarily that we want a different morality or a different world. We just need to know that the possibility of it can be occasionally expressed. That there can be particular persons and particular moments that do not belong to the present is a great thrill.

For many years, Silverman provided great thrills. Just as you felt you could predict the climate of her next gag, she’d rain on your forecast. She was cloudy, thunderous and chaotic until she became, in recent years, fine and mild.

Silverman’s 2010 memoir The Bedwetter signalled the end of the storm. It’s a moderately funny book, but it’s also a redemptive one in which the author shares her vision for a more tolerant world. It was less of a surprise when more agreeable comedians like Amy Poehler, Tina Fey and Lena Dunham released memoirs that sought to “empower” their readers and began delivering more optimistic work in which they cast themselves as role models. There’s a great public appetite for aspiration, and let’s forgive these stars for doing the opposite of comedy.

But when Schumer, who had been doing so well as an arsehole, is given over to a therapeutic tendency, some of us nerds despair.

Schumer is yet to release a book, but when she does, you can bet it’s going to be of the “If I Can Help Just One Woman” order. Self-help is where she’s headed. Her recent hit film Trainwreck follows the Apatow formula of obscenity-and-inspiration, and she is freed at the film’s end not by comic excellence but by her optimism. The profitable culture of self-development looks set to turn one of our funniest devils into an angel of hope.

Comedians, like cats, cannot improve and hope to remain themselves. To watch Schumer on the Today show talking about charitable “empowerment” of women through sensible fashion choices is to watch your tabby put your needs above his own. The power of comedy, of cats, and of Schumer in particular, is in their ungovernable sass. That she has come, as so many other comics, to honour an orthodox moral view — in this case of “empowerment” — is enough to make one cough up a furball on the culture.