The ACCC approves Murdoch's Ten purchase. And other media tidbits of the day.

Regulators approve Murdoch bid. The Murdoch clan’s expanding domination of the Australian media landscape was given the big tick today by the competition regulator, the ACCC ,and the media regulator, ACMA. Both saw nothing really to block Foxtel (half-owned by News Corp, which is 39% controlled by the Murdochs) from completing the purchase of a 15% stake in the struggling Ten Network and take control of its TV ad sales business.

The approval means that, when added to the domination of Ten’s programming by Fox TV of the US (controlled by 21st Century Fox, the other Murdoch Media clan media group) and Shine (50% owned by 21st Century Fox), and the close arrangement Ten has with Fox Sports on programming in Australia, Ten is as tightly bound to the Murdoch empire as if it were wholly owned.

ACCC chairman Rod Sims said although the deal would lead to a greater alignment of Foxtel’s and Ten’s interest, and the pay-TV provider would have more influence over the metropolitan broadcaster, the proposed transaction would not result in “a substantial lessening of competition”. With the growth of streaming video services, that’s probably a good call. — Glenn Dyer

Worst journo crowned. For the past six years the colourful and newly single businessman Geoffrey Edelsten has run www.australiasworstjournalist.com.au, a website that details his own complaints about the mostly Melbourne media whose attention he seems to spend so much time courting.

At about this time every year, the website closes voting on a list of journalists presumably nominated for the “worst journalist” gong by Edelsten. Previous winners have included gossip scribes Ben Butler and Annette Sharp, Jill Singer, Paul Barry and Kate McClymont.

But there’s a new winner this year, with Age senior journo Chris Vedelago taking out the gong (38 votes of 109 cast) earlier this month, according to a now-closed tally of votes on the website. It’s his second achievement in less than 12 months — Vedelago took out the business journalism Walkley with Adele Ferguson last December, but we trust he’ll treasure the “worst journalist” gong, too.

Vedelago achievement appears to stem from his referring to Edelsten in writing as a “disgraced former doctor”. For the record, Edelsten is no longer allowed to practise medicine in New South Wales or Victoria. — Myriam Robin

TV in the new year. Yesterday’s 2016 program launch by the Seven Network revealed six new programs, with some old favourites returning, such as My Kitchen Rules, The X Factor and Dancing with the Stars, plus the wounded House Rules; lots of local drama, video streaming (with the AFL rights still to be sorted), the Rio Olympics and lots of stuff that will interest advertisers, agencies and buying groups.

Seven CEO Tim Worner pointed out that traditional television audiences continued to fall, and said Seven had “changed more in the last 18 months than in the last 18 years”, and promised further evolution via mobile streaming, more directed and supported products for advertisers and, for the under-siege viewer, fewer reality programs. That’s because there’s a shortage of formats that work around the world and the past two years has shown an increase in viewer disengagement with contrived reality programs, with audience sizes falling and not really reaching the 2 million-plus national level until the final episodes of a series.

Until a decade ago, Seven was riding high on the back of foreign-made mega hits such as Desperate Housewives and Lost, the 2016 launch yesterday saw foreign programs relegated to an afterthought — The Blacklist, Criminal Minds and Downton Abbey (although the fact that it will be its final series was not mentioned). — Glenn Dyer

Not if, but when for ESPN. The cost-cutting at America’s biggest sports cable network, ESPN, hits the road this week with reports overnight that 300 jobs, or 4% of the workforce, will be eliminated this week. The job losses have been on the cards for the past three months after Disney executives revealed that ESPN had lost more than 3.2 million subscribers in the past year. Adding to the pressure on ESPN has been the higher sports rights under new rights agreements at a time when ad-revenue growth has slowed, on top of the fall in subscriber numbers.

The layoffs will affect departments across the company, including distribution, advertising, technology, administration, content and others. In distribution, ESPN is merging groups to reflect the fact that the number of cable TV providers has fallen because of the spate of mergers in recent years. It is also creating a merged group to deal with traditional and digital distributors of ESPN channels. — Glenn Dyer

The last myth busted. The legendary Australian-owned TV series, Mythbusters, will come to an end next year. The program is the Discovery Channel’s longest-running series and its final season starts on January 9, 2016. Discovery announced the decision overnight. Mythbusters has been through 248 episodes, 2950 experiments, 1050 myths, and 900 explosions, all organised by hosts Adam Savage and Jamie Hyneman. The series premiered on Discovery in January 2003.

Discovery left open a series revival at a future date, but that remains very uncertain as co-hosts Savage and Hyneman are involved in a spy drama project with CBS. Beyond Productions has produced the series. It is currently being seen on the Seven Network here, as well as SBS. US magazine Entertainment Weekly reported the closure in an interview with Adam Savage. — Glenn Dyer

Video of the day. Keating and O’Brien — a double act nonpareil. 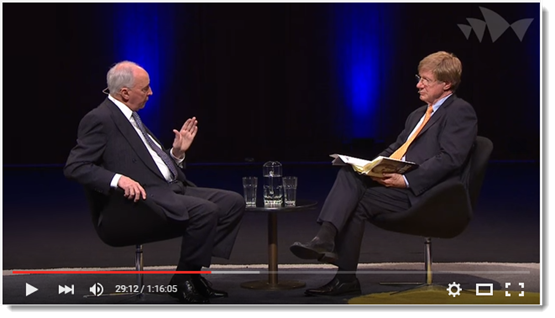 The accc may. As well not exist.