It’s the economy, stupid: how Hockey’s big claims check out

“We have an economic plan that is being delivered and is working, an economy that is $68 billion bigger than the one that we inherited. We’ve abolished five Labor taxes and we collect less tax than if Labor were in government. We’ve improved the Budget bottom line by $50 billion, negotiated three free trade agreements, delivered over $50 billion of new infrastructure, but most importantly of all, 300,000 new jobs in Australia since we were elected.”

It would be remiss of me to begin to assess the economic legacy of recent treasurer Joe Hockey without first making clear that my fundamental view is that the economy just happens, politicians get to take the credit. Essentially, we buy into the illusion that somehow the treasurer, along with various institutions like the RBA, have their hands on the levers to steer the economy like a delicate machine through the global economic environment. Yet in reality individual politicians have very little power to make any substantial economic change, which is only more apparent in Australia’s small open economy, where global conditions dictate the success of our major cyclical industries.

Nevertheless, we can take a look at what Hockey himself claims as his legacy, interrogate those claims, and translate them into meaningful measures of economic progress during his period in the hot seat. I’m going to take three of his claims and see whether they are something to gloat about.

Yes, $68 billion is a big number. But big numbers can be small when you are measuring big things, like GDP, which is about 24 times larger than this at around $1.6 trillion per year.

In what might be a surprise for young readers, GDP wasn’t always the metric by which we measure progress. Until the 1960s gross national product was a more useful measure, as it included national asset offshore and could be used to estimate resources available for the war effort. Before the Great Depression the economic focus was very mercantilist, focusing predominantly on the accumulation of national wealth in the form of foreign capital.

Yet measuring gross production, as we do now with GDP, without considering the depreciation of our capital stock, including our buildings, ships, vehicles, machines and tools, roads, rail, and all other infrastructure, seems like short-sighted way to measure progress.

In any case, the data shows that GDP has increased $390 a person since Hockey became treasurer, up until the latest data for June 2015. Net domestic production, which factors in depreciation of capital equipment, increased $179 per person, while real net national disposable income decreased by $283 a person. This final measure considers income flows to foreign-owned entities as well, and provides a better measure of how wealthy Australians are in general. With this picture using multiple measures we can see that there is a reason many people don’t feel like they are better off, even though the GDP numbers suggest production is increasing.

This is the beauty of complex economic measurement — there is always a measure that looks good, and very few people understand exactly what each measure means. Moreover, simple population growth can hide declines in the average per person, which was also the case during the financial crisis, when Australia avoided a technical recession with two quarters of negative GDP growth, but in fact had three quarters of negative GDP growth in per capita terms.

If I were to offer Hockey some advice on spinning the numbers, I would suggest he could have said that GDP growth per capita during his tenure was around double that of the Rudd-Gillard years, being 1.15% per year on average, compared to only 0.66% for the previous government (which also reigned during the financial crisis).

Hockey also drags out the big numbers to talk about his infrastructure legacy. The data show that indeed the federal government did boost infrastructure spending during Hockey’s tenure by $500 million a quarter (up from $2.3 billion in September 2013 to $2.8 billion in June 2015). This was during a period with a massive decline in private sector capital investment, and a decline in capital investment at other levels of government. Certainly there was (and is) scope for the federal government to increase this spend even further, but the facts show that this was genuine boost, even if a little offset by a decline in spending of $100 million a quarter by Commonwealth public corporations. 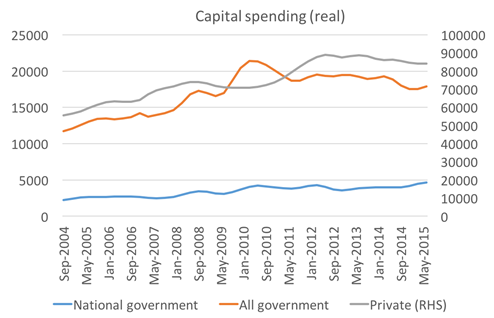 Here’s where Hockey had to be very careful to present his economic legacy with a positive spin. To correct the record, the data show that in fact there were 312,900 new jobs since Hockey became treasurer, at least up to the latest numbers in June 2015. Great job, Joe!

The problem here of course is that during that time there were also an additional 84,300 unemployed people among the 630,000 new people in Australia over that period. Terrible job, Joe!

Now, these are not huge changes, and really almost none of the blame can be directed to the former treasurer, as I explained at the opening. The true legacy of Hockey as treasurer is the way he refined the art of spinning economic numbers to his benefit. And no doubt future treasurers will improve on Hockey’s own legacy of spin.