Do migrants oppose gay marriage as much as the Libs claim? 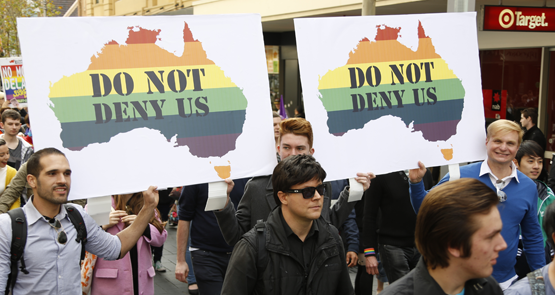 Assistant minister for social services and staunch gay marriage opponent Senator Concetta Fierravanti-Wells told yesterday’s Press Club luncheon that migrants wouldn’t back marriage equality, but a Crikey investigation has found almost half of them come from countries where it is already legal.

“Same-sex marriage is not a priority, but if it is made a priority, it would raise strong opposition to the faith of many Australians, especially our migrant communities who consider marriage a bedrock institution,” she said.

These migrants, she says, have also been left out of opinion polls showing more than two-thirds of Australians support changing the definition of marriage.

But Fierravanti-Wells’ speech omitted the fact 40% of those born overseas are from countries where same-sex marriage is already legal. Unless the Senator thinks these migrants, who number more than 2.5 million, have chosen Australia as refuge from their pro-marriage equality homelands, then Australia’s overseas-born population is a lot different to the one she represented yesterday.

Of course, most of those migrants are Brits or New Zealanders, whose social outlooks are arguably similar to those of most Australian-born people. And of the almost two dozen countries where same-sex couples are now allowed to wed, Brazil and Argentina are the only ones that are neither English-speaking nor Western.

Fierravanti-Wells’ contention also falls down in her failure to consider the diversity that can be found inside any one particular culture or faith.

However, when you consider the religious attendance of these faith groups, one wonders how strictly they actually adhere to their religion’s doctrines, including those that relate to same-sex marriage.

The Australian National University’s 2013 election survey shows 47% of Buddhists never attend temple, or do so less than once a year. The same can be said for a third of Australia’s Jewish population and 39% of Australian Muslims.

And while we can’t assume lack of religious attendance means support for marriage equality, it does mean Fierravanti-Wells can’t argue religion as a reason to stymie it, either.

Of course, there’s plenty of resistance within these communities towards a notion as socially progressive as marriage equality, just as there is resistance towards it from many who were born in Australia. But even though the ANU survey found disagreement with same-sex marriage was highest among overseas-born Australians, there were plenty who didn’t dismiss it so easily.

Participants were given the statement “Same-sex marriage should be prohibited by law” and asked whether they strongly agreed, agreed, disagreed, strongly disagreed, or neither agreed nor disagreed with it.

More than 30% of Australian residents born in India, the Philippines, Vietnam and Italy — Australia’s four largest non-English-speaking communities after the Chinese — disagreed or disagreed strongly with prohibiting same-sex marriage. That figure grows to over 50% when those who neither agreed nor disagreed with its prohibition are included. 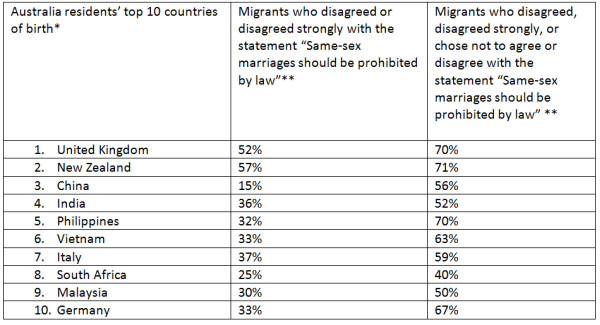 *Source: Estimated Resident Population by Country of Birth — 1992 to 2014, Australian Bureau of Statistics

Maybe those who neither agreed nor disagreed were undecided when it came to marriage equality. Maybe they didn’t particularly care. But it certainly can’t be said they were opposed to same-sex marriage.

“Policies and programs should be developed in the context of how they affect all Australians, regardless of language or ethnicity,” Fierravanti-Wells said yesterday.

If that’s the case, she would do well to consider the diverse wealth of perspectives within those groups. They might not be as easily characterised as she thinks.

Crikey asked Fierravanti-Wells for a response but did not hear back before deadline.

The wrong answer: religious group doesn’t like its own survey

Never mind facts – Con’s got a message to sell.

Against gay marriage? Don’t marry one!

Srsly though, Crikey… when do the Liberal’s care about the social sentiments of migrants? It’s their own Christian faction that has an issue, all the rest is just projection.