Vintage Keating rips into the monarchy, Liberals with classic chutzpah

The uneducated kid from Bankstown held the audience in the palms of his soft hands. It was vintage PJK. 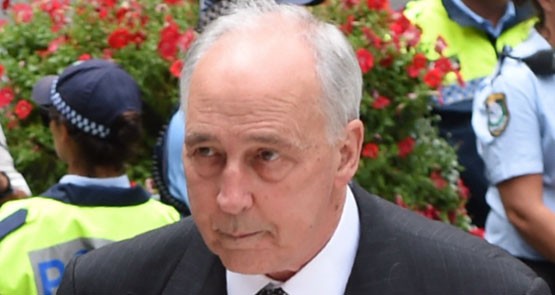 The Sydney Opera House was the only possible venue to launch Kerry O’Brien’s new biography of Paul Keating. If the Opera House hadn’t been available, Keating would have booked the marble foyer of the Louvre in Paris or the Parthenon in Athens.

In the past 10 years Keating has emerged from self-exile to work on his legacy as crusading treasurer and high-achieving prime minister.

According to Keating, he has taken up the cudgels reluctantly to defend his reputation. It started when Bob Hawke’s second wife, Blanche d’Alpuget, wrote a second Hawke biography in 2010, Hawke: The Prime Minister, that “pushed [Keating] too far”.

The dark solitude following his 1996 election defeat came to an abrupt end, and he began to relish his new career as a political celebrity. A very successful musical played across Australia, followed by an ABC TV series, many memorable Lateline interviews and a book of speeches.

Last night, he and O’Brien — who have front- and back-page photographs on the dust jacket — launched their 816-page biography (Keating by Kerry O’Brien, Allen & Unwin) at a sold-out event in the main concert hall of the Opera House.

Keating has sat in the audience on countless occasions listening to classical music; now he was centre stage conducting his own orchestra: us.

O’Brien asked: “You’ve always maintained you won’t write your own book. Why not?”

Keating: “Anyone who’s any good never writes about themselves.”

It was vintage PJK. The Opera House audience roared its approval.

The way Keating tells it, he was the driving force behind the successes of the three-term Hawke government and then changed the face of Australia during his single term in the Lodge. Others members of the Hawke and Keating cabinets tell it differently — Peter Walsh, John Button and John Kerin, for example – but they were spanked for their impudence and sent to the far corner of the classroom as punishment.

As he told last night’s audience “saving Australia from mediocrity” was his biggest achievement. “This place got saved from slipping under the waves,” he said, before adding, “by the Labor Party.”

Many in the audience were gobsmacked by the sheer vanity of it: some clapped and cheered, but others laughed.

Suddenly you feared he might became a figure of fun instead a figure of substance. However, he quickly caught the audience’s sceptical mood and switched back to Man of Substance.

On the monarchy: “No great country has the monarch of another country as their head of state.”

On Franklin Delano Roosevelt: “Roosevelt was a greatest figure in all of history. He saved the biggest democracy in the world and the biggest economy.”

On leadership: “You have to turn good policy into good politics.”

On the Hawke years: “I provided spiritual nourishment. I took that on. As long as Bob allowed me to keep my foot on the accelerator, I forgave his indiscretions.”

On running his cabinet: “I’d turn up with my Christie’s and Sotheby’s catalogues and they’d think, ‘He’s distracted’. And then I’d strike.”

On Prime Minister Malcolm Turnbull: “He’s trying to take the Liberal Party back to the centre. Can he take on the right wing of his own party, or is he going to be stuck with a Looney Tune party?”

O’Brien then asked: “Do you see him [Bill Shorten] as representing anything?”

The uneducated kid from Bankstown held the audience in the palms of his soft hands. He had barged into our lives after a successful career as an ALP factional brawler who relished the “annual blood-letting at the [Sydney] Town Hall” where the NSW party used to meet annually. By comparison, his later summit meetings with world leaders like US president Bill Clinton and Indonesian president Suharto were with “nicer people”, he conceded.

I’ve had countless criticisms of Keating during his active political career, but I drew some conclusions along the way. The black mob loved him for Mabo, his Redfern speech and because he gave them dignity through inclusion. I also noticed that all the wealthiest reactionaries loathed him — and still do — while the poorest adored him. Who could ignore the temperament of the nation?

Keating concluded the evening with a characteristic spray of the Liberal Party: “Those Liberals, I used to throw them around like rag dolls. It was such fun.”

Unrestrained chutzpah, so much self-belief, no trace of self-doubt. Many in the audience rose for a standing ovation, some cheered, catcalled and whistled. Everyone applauded.

His stature has grown as an immediate consequence of the Kevin Rudd and Julia Gillard debacle. When compared to contemporary Liberal PMs such as Malcolm Fraser, John Howard and Tony Abbott, Keating is a towering legend.

And when he mocks the Liberals, bankers, the royals, George Bush and Tony Blair, he tunes into an Australian authenticity, irreverence and originality. The mob love him for it because he has captured the zeitgeist of the future Oz republic way before any other politician.

He may be a big-noter, but that seems a very small price to pay for the energy and exhilaration of the Keating era. When he spoke of enhancing our cultural life through education, the arts and science, he gave us big ideas about the world and our place in it. Meanwhile, the Turnbullite Liberals are still serving up “wealth creation” as their No. 1 objective.

By the way, although I’m an unashamed Gough Whitlam admirer, I felt impelled to stand and clap too, muttering: “I shall not look upon his like again.” PJK still puts on the best show in town.

Great article – wish I had been there to see a great ex-politician in the truest sense of the word and a great journalist. Thank you for taking me there.

I knew we had something special in Keating at the time. It’s only in retrospect that we can recognise just how lucky we were. For a short time, Donald Horne was wrong.

But only a short time.

Unashamed admirer, he is the only blowhard skite I have known who I liked unequivocally.

Substance will do that!

I miss Paul Keating. How I wish there was someone of his ilk to take on the LNP today.
Australia is all the poorer for him being replaced as PM

Three cheers Alex for your great piece. After Paul Keating lost the election, I was in tears and wrote a personal letter shortly after thanking him for his service to our country and wishing he and his family well. Guess what? Two months later I received a personal response which I have filed away and treasure.

I was a committed Liberal pre-Keating. He prised me out of the rut with his vision, determination. intelligence & wit. Effortlessly he wiped the floor with my party, rag dolls indeed.