Vale, Joe Hockey, who never managed to pass his own beloved ‘pub test’

Glenn Dyer and Josh Taylor look back on the career and contribution of our former treasurer. 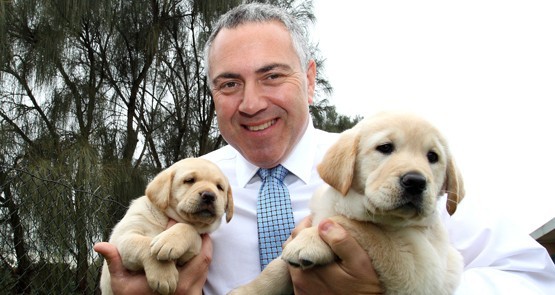 In his final speech in Parliament, former Treasurer Joe Hockey has blamed the politics, not the policy, and once again, social media and the 24-hour news cycle for his political demise.

“We cannot make it normal to have four prime ministers and four treasurers in just four years. Leadership instability and ministerial turnover is the enemy of good public policy,” Hockey said in the House of Representatives in his final speech today.

In the chamber were his former housemate Brendan Nelson, NSW Treasurer Gladys Berejiklian, his wife and three children, and Coalition senators, including ministers Mathias Cormann, Simon Birmingham and Marise Payne.

Loyal to the end to Tony Abbott — who was overseas for the speech — Hockey paid tribute to the former prime minister:

“Yes, at times we have clashed, I confess, for more than 30 years we’ve argued our differences on everything from the republic to budget savings, but I say directly to the Australian people that the real Tony Abbott is more of a good and decent man than you may know.”

For the treasurer who helped Tony Abbott turn debt and deficit into such a potent weapon against Julia Gillard and Kevin Rudd (regardless of its accuracy), Joe Hockey ended up as a bit of a dud. From not being able to stop the sacking of his department head to the 2014 federal budget and the unfortunate pictures of him and Finance Minister Mathias Cormann sucking on big cigars to equally unfortunate comments about poor people not driving cars to the build-up in the size of the federal debt burden and the budget deficit, Joe failed the “pub test”.

Right from the start, Joe was ineffectual — he could not stop Abbott and his office sacking the head of Treasury, Martin Parkinson, in the first days after taking power after the win in the September 2013 federal election, even though Hockey and Abbott were forced to extend Parkinson’s term to late 2014, to take account of Australia’s hosting of the G-20 major economies summit that year.

His first overseas trip came soon after becoming treasurer, when he zoomed off to the World Bank/IMF autumn session in Washington and returned warning that the sky was about to fall because of the looming shutdown of the US government because of the brawl between Congress and the US President — which ended up being resolved.

The upshot was the injection of $8.8 billion into the reserves of the Reserve Bank, adding the same amount to government borrowings and the debt pile that he and Abbott had spent years building into a bogey.

In February 2012, in a speech in London, Hockey laid out his credentials as a tough-guy treasurer (Keating/Costello model) with a speech entitled “The end of the Age of Entitlement”, which earned him his spurs — so far as conservative, right-wing small government thinkers were concerned. And he followed that up in early 2014 with another warning along the same lines: “The age of entitlement is over, and the age of personal responsibility has begun’.’

In his final speech, Hockey claimed his “age of entitlement” speech as one of the best of the past 20 years:

“I challenge all and sundry to name a speech in the last 20 years that has influenced the national debate in the way that the end of the age of entitlement speech did. I gave it in Opposition to a group of just 40 people in London, quite a few Tory MPs, no media were present.

“Yet the speech had an impact in a number of different countries from opposition it gave the Labor Party, in government, a leave pass to start to wind back unfair welfare entitlements and when we came to government, if we had not begun by ending the age of entitlement for business, there would have been no free trade agreements because the cost to the nation would have been too great.”

The 2014-15 federal budget is remembered for his ad hominem attack on the poor and less well-off, welfare, students and low-income earners, and the blithe bolstering of the financial position of the wealthier in the community. But much of that budget was also due to the urging and policy drive of Abbott and his advisers.

But it triggered the start of the long slide in the fortunes and standing (in electoral terms) of the Abbott government and the prime minister himself, which ended in last month’s coup by Malcolm Turnbull. Now Hockey is leaving and, in a great irony, is likely being given a job he probably feels, as a senior politician, entitled to: the ambassador’s gig in Washington.

Hockey wears the scars from his parliamentary battles, and battles with the media. This was clear in his blaming the difficulties of “need-it-now” culture fostered by social media, and the 24-hour news cycle. Hockey also said he was always taught never to put up honesty for sale:

“Growing up in a small-business family, I learned that the reward will come as a result of hard work and innovation. In particular, you should never, never, ever put your honesty or your integrity up for sale.”

Hockey wished the Turnbull government luck and said he hoped it would be the best government Australia ever had. Prime Minister Malcolm Turnbull said he believed Hockey still had much to contribute to public life (wink, wink, nudge, nudge).

Hockey was right about one thing in that 2014 speech: while the age of entitlement isn’t over (Tony Abbott still feels he was entitled to continue as PM), Joe can feel some personal responsibility for the coup that removed himself and Abbott.

a leave pass to start to wind back unfair welfare entitlements.. never, ever put your honesty or your integrity up for sale.” this from a buffoon who sold out for a tax payer funded job for which he has no credentials..

“Leadership instability and ministerial turnover is the enemy of good public policy,”

And good public policy is the antidote to leadership instability and ministerial turnover.

Statements of personal responsibility, but never actions, never owning up to their part in their downfall.

In this, he and Abbott were of one mind.

Hockey may have been able to be more true to himself and his integrity if he had stayed and operated under a more moderate PM (if Turnbull would have him). But, like his former Liberal Treasurer colleague, Costello, he does not have the ticker to stand and fight in the face of defeat.

If I had to find a positive thing to say about him, he at lease doesn’t induldge false modesty; and he does have a lot to be modest about.