Bruce Billson’s exciting new role. It’s not often anymore that the bells ring in the press gallery for a major announcement. The advent of email — and now Slack if you believe the Prime Minister — means there are simpler ways to get the attention of  journalists in Parliament. So the ringing of the bell on Tuesday morning was something of a surprise for many of the journalists in the gallery.

They flocked to find recently deposed — and still as excitable — former minister for small business Bruce Billson, who thanked some in the gallery for helping him out in a hard time:

“They are some of the biggest-hearted people in the gallery. They knew at this time of personal challenge for me — a career setback, some disappointment and frankly some surprise — what’s the best they can do for me? And in the gallery tradition the answer was exploit my hardship.”

Billson joked he was being “ruthlessly exploited” by the press gallery to be the quiz master for the new “Canberra Insider Games”. A fundraising trivia night on November 11 (the 40th anniversary of the Dismissal) will be for people “too tightarse to go to the press gallery ball”, but Crikey hears it is mainly for the press gallery and press secretaries who could not attend the Midwinter Ball in June. 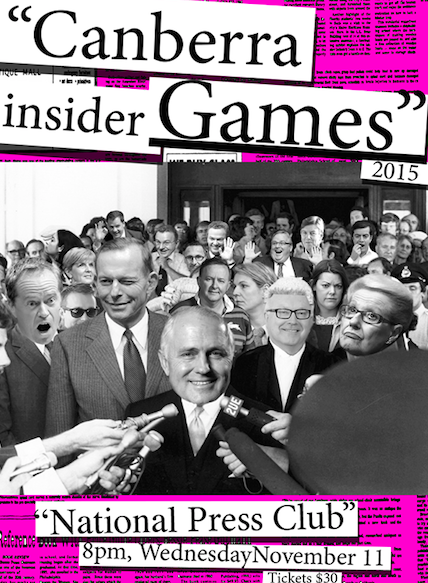 “My task will be to probe questions without answers, to draw out just how little the press gallery actually knows about the discussions we’re having and draw out the press secretaries so they can see the face, not the holograms of the people shaping our news,” Billson said of his role.

There will be a press gallery #qanda, a lip-sync battle between Labor’s Terri Butler, the Greens’ Sarah Hanson-Young and Labor’s Sam Dastyari, and Political Family Feud, where political families compete (mainly just Ed and Sabina Husic on one side, and the “wolf pack” of Ewen Jones, Wyatt Roy and Dan Tehan on the other), and a quiz hosted by Billson. The DJ for the night will be DJ Albo Anthony Albanese, and a new press gallery band called “The Entitlements”.

Julie Bishop, Tanya Plibersek, Marise Payne, Barnaby Joyce and the “extremely gifted and talented” (according to Billson) new Small Business Minister Kelly O’Dwyer will be there. As will Wyatt Roy, “if he’s allowed to stay out that late”.

The funds raised will go to Soldier On, a charity for returned soldiers, and the DART centre for journalists impacted by conflict and trauma, and Billson joked the event would be held in the Matt Moran (Turnbull’s recently appointed press secretary and former gallery journalist) ballroom at the National Press Club.

The event is strictly off the record, according to the invite:

“Similar to the Midwinter Ball, the event will be completely off the record — no photos, no videos, no vines, no snapchats, no wickr, no signal, no confide and no breaking Status A bespoke Italian marble coffee tables.”

Kevin Andrews keeps John Howard’s couch. It is the stuff of urban legend in the halls of Parliament House that when John Howard won the election in 1996, he was aghast at the custom-made furniture designed for the prime minister’s office, and quickly moved to have the furniture removed and replaced with his own. In particular, a set of $10,000 green leather Chesterfields were brought in to Parliament. For years this was a point of pain for parliamentary staff, who believed the chairs did not fit in with the style of the office.

When Kevin Rudd became prime minister in 2007, he had all the Chesterfields and other Howard-era furniture removed, and the old parliamentary furniture was removed from storage, dusted off and brought back in.

While everyone was focused on the marble/granite table controversy, there was a small mention of the fate of Andrews’ Chesterfield in Senate estimates hearings on Monday, where Labor Senator Joe Ludwig was informed the Chesterfield couch had moved from then-defence minister Kevin Andrews’ ministerial office to his backbench office.

As he takes his seat on the backbench, the bitterness is likely eased by the memory of the good old days with the old guard on that Chesterfield.

SBS strikes back on the Seven Beer Fridge. Ms Tips has previously reported on the popular beer fridge Seven operates in the press gallery, and its latest poster takes the term “spill” far too literally. 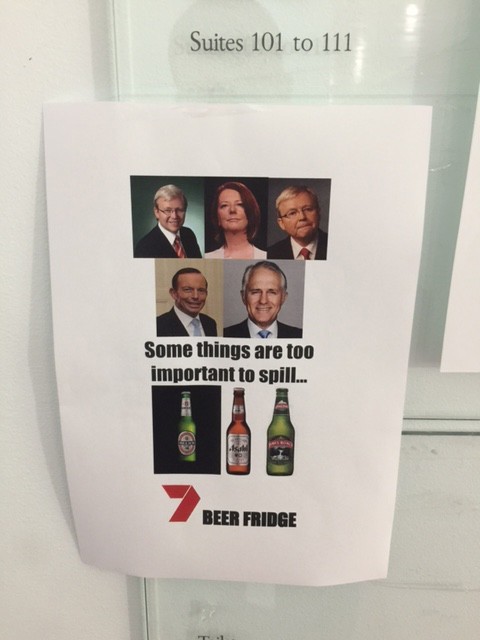 But a recent entry in the sustenance battle in the parliamentary press gallery is SBS, which is now offering sweets to gallery journos. We spotted this in the gallery last week: 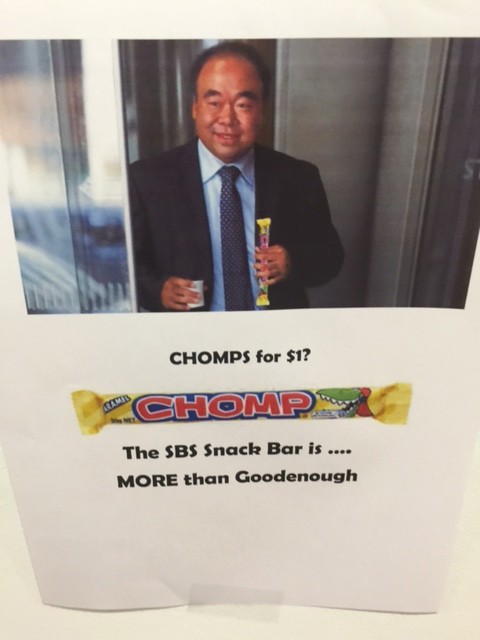 You can’t help but think that poor Liberal MP Ian Goodenough has been subjected to that joke for his entire life.

Last week, the agenda of the council had included a motion to censure university student Kerrod Gream. As Crikey has reported, the motion called on the council to refer Gream to the state director and state executive of the NSW Liberal party for his “online and personal abuse towards state and federal liberal parliamentarians” which “risked bringing the Liberal party into disrepute”, and for his “continued criticism of the Liberal brand”, which placed him in “contravention of the media policy”. It’s understood this referred to Gream’s online disputes with parliamentarians about Liberal policies like the NSW lockout laws. The motion had been inserted into the meeting agenda without a mover and seconder, making it difficult to know for sure whose doing it was.

While the motion was vanquished, Liberal insiders Crikey spoke to had broader concerns about the extent to which the NSW Liberal party censures members for their personal views as expressed on Facebook and elsewhere online.

The Senator for Internet Comments. Liberal Democratic Senator David Leyonhjelm’s fondness for commenting on far-right blogs like Catallaxy is already well known, but it appears the good Senator is back at it again. Not only did Leyonhjelm meet with eight cabinet ministers last week, he has also found time to comment on Catallaxy.

First Leyonhjelm weighed into a debate about the virtues of installing Malcolm Turnbull into the top job, agreeing with blog editor Sinclair Davidson that voters should now unite behind Turnbull in the fight against Opposition Leader Bill Shorten.

Then, after his comment drew the ire of other readers, he leapt to his own defence.

Yet more impassioned advocacy for Turnbull support followed. The senator really does seem to be smitten with the new leader, telling Fairfax last week there’s a “lot more love in the air” since Abbott was knifed.

Our perfect ministerial standards — full of holes and unenforceable

Who knew that CatLaxative still existed?

AR, I didn’t know this, but I do know that the young fellow who ran Catalaxy decades back was intellectually way ahead of most of the ovine Crikey Crowd, as was his spelling.