What will Joe Hockey's legacy be? 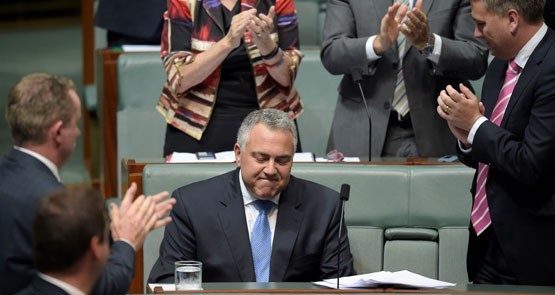 When, in the dying weeks of his prime ministership, Tony Abbott — oh google him, people, we can’t footnote everything — protected the career of Joe Hockey, many saw it as a gallant act. It was, but it was more remarkable for something else, being the first time in recorded history that a human had saved an airbag. Joe Benedict Hockey is not so much departing politics, trailing clouds of glory, as deflating slowly and blowing away, the departure of a man who appeared to aspire to ineffectuality. He has been the least striking treasurer for a generation, a man who came into the office following Bowen, Swan, Costello, Willis, Keating and Howard. Say what you like about these men, they had an agenda. Only Willis has been equally ineffective, largely a result of the fact that Keating was virtually a dual PM-treasurer (and I’ve left out a couple of brief placeholders).

That’s not the impression you’d get from a speech in Parliament today, which cited Hockey as not merely one of the most dynamic treasurers of our country, but of any nation over the past era. Sadly, that speech was by, erm, Joe Hockey, giving his valedictory address to Parliament, as he departs — having failed, by his own admission, at the politics of government, to be our diplomatic representative to our most important ally. Having started in standard boilerplate mode, with thanks to family, political allies, former Canberra flatmates (“our fondest memories are of eating Paddle Pops and watching Jerry Springer”), this farewell suddenly lurched into megalomania.

“I challenge anyone to name a speech by a treasurer anywhere in the world that’s been as influential as ‘the end of the age of entitlement’.”

With that observation, the welcoming mood in the chamber appeared to go a little flat. Say what now? That bandwagon-jumping brainfart-speech of yours you let out in London, which appeared to borrow a bit from David Cameron and a lot from Mitt Romney, that passed largely without mention in the world, and led your government to disaster even before it had begun? That speech?

Apparently so. There was more. The Medical Research Future Fund, the duplicating ad-hoc fund the Medicare co-payment was going to go into, was a trailblazing initiative “not just for this country, but for the world”. This extraordinary degree of self-congratulation went off for about five minutes, until we got back to family: “For 20 years my wife, Melissa, had paid the mortgage, paid the bills, and given birth to our children,” said the scourge of “leaners, not lifters”, before continuing: “She must have wondered why she married me!” Cut to a shot of Melissa in the gallery, looking quizzical. After that, more boilerplate, Jesuits, some mangled Latin, a whinge about the revolving door of Australian politics, and an attempt to terrify his three children present for the speech, about the consequences of deficits: “This is intergenerational theft! We are robbing our children of the means of life!” Then tributes and a bit of a blub.

M’colleagues will assess Hockey’s recent economic legacy, historians assigned minor research topics his ministerial career — including triumphs such as WorkChoices — but at this point there is time to stop and reflect on what he was actually for. The man ostensibly began as a “moderate” Liberal — having been elected president of the Sydney University Students’ Representative Council as a more-or-less independent, he was caught up in the nationwide protests against the introduction of fees and commercialisation of universities being driven by Hawke education minister John Dawkins, and he had no choice but to front the Sydney Uni version of them. Footage from the era shows an all-too-familiar image from student protest — a group of snarling anarcho-punks with hair in the half-shaved Human League style, being fronted by a boofheaded boybear wearing the only blazer to be found in the Chippendale-Redfern area, well aware that the mob behind would string him up if they could.

Their instincts were correct: the Hockey-led SRC soon cut funding to Honi Soit, the student paper, and closed down the union women’s room, a move as routine to the career of a Liberal politician as doing articles with Corrs Chambers Westgarth. He then did his articles with Corrs Chambers Westgarth, and launched into a slow inching up the greasy pole.

Hockey had been courted by the ALP in the late ’80s; according to the biography by Madonna King, a reading of John Stuart Mill convinced him he was a liberal. He put some efforts into cultivating a “moderate” strand within the NSW Liberal Party, a party whose rightward reaches were then beginning to be colonised by US-style conservative evangelical Christians; with a couple of other people (including Chris Gallus, a representative of the remnant and now departed left of the Liberal Party), he established the John Stuart Mill Society.

But one or two people who remember him from the time were struck by his lack of content as he entered federal politics. Having taken the seat of North Sydney, held by independent Ted Mack for six years, Hockey virtually running as an independent, his campaign bus having no mention of the dreaded “L” word whatsoever. One political activist of the time remembers him as totally at sea on the GST debate that bedevilled the first Howard government: “He had no idea at all, and didn’t seem to much care that he did.” By then he was already on the way.

His liberal instincts don’t appear to be in doubt, on a range of social and political fronts, such as republicanism — the trouble is they simply didn’t go anywhere. In our era, the challenge was to try to reconstruct liberalism while the neoconservatism of the “War on Terror” et al was in the ascendant, and to try and relate a centre-right approach to fairness, to a base doctrine of individuality and property. But that work appears to have been all but discontinued in the party, if it had been really started at all, and so when Hockey came to the Treasury there wasn’t any consistent base for him to act from. His PM was no help — Tony Abbott’s idea of economics is tithing the harvest to build a new cathedral — and Hockey’s solution in the 2014 budget was, well, no one really knows what it was. It appears to have been the most self-defeating budget of modern times, with measures designed to raise up enemies against the party from every sector, while lacking the grunt to address the “budget emergency” they had named as a thing.

That was Hockey’s anti-triumph, and his swansong, echoed in his clanging remarks about the poors not driving cars. The remark wasn’t cruel, but it was stupid: the poors don’t drive cars because they can’t afford to, foregoing things they would otherwise do (including jobs) — not because they had done everything they needed to.

There didn’t seem much doubt that Hockey’s long time in the lap of luxury, courtesy of his top-flight banker wife’s income, had made him more obtuse than he otherwise would have been, which was pretty obtuse in the first place. The son of an Armenian-Palestinian deli owner had come far. But he has not gone a long way. His farewell speech became embarrassing and self-aggrandising, one suspects, because if he hadn’t filled it out with that, it would have consisted of him informing the house that he had handed in his pass, and asking for some help in taking a few boxes to the waiting maxi-taxi. Doubtless he has his achievements, and is a not-undecent man, but the latter part of his career is a testament to the failure of both sides of mainstream Australian politics to do joined-up thinking about what needs to be done in a post-egalitarian country about to fall off the end of a resources boom. The ultimate testament to that vacuum would be for Labor and the Greens to find a palatable high-profile independent, run dead themselves in North Sydney, and take it from the Liberal Party. By then, sloppy Joe will be inside the DC Beltway, starting on the rounds of banqueting that might have been his vocation all along. Sic transit gloria mundi (translation: the poor don’t drive cars).

Coalition hypocrisy? Abbott and Hockey in their own words

‘the end of the age of entitlement’.” but not for Eleventy..

Ha. Bravo GR. A mighty fine opening par if ever I’ve seen one.

There was a time where Hockey looked like he might be a modifying, humanising force in the callous halls of the Liberal Party.

But then he spoke.

I can’t hate him, but I hated his tactics, I hated his slogans, his condescending ‘der’ statements undermining Swan who did a thousand times better job in much more difficult circumstances.

It’s his hollowness that ultimately I just couldn’t stand, and that wonderful inability of many of the right to understand that they are dull as dishwater, thick as two short planks, sharp as bowling balls ……..

Be gone, entitled one, to your next entitlement. God of the leaners.

Thanks Guy for one of the best TA one-liners ever! “.. tithing the harvest to build a new cathedral” I hope you don’t mind, but it will go out on Facebook, appropriately credited, of course!

Nicely put GR. But you neglected one thing…You have mentioned the cost to the country of the by by- election but what about those poor business men / members of the North Sydney Forum…please think of them and their wasted donations errr meal tickets…