Chris Kenny managed to secure himself an $8000 journalist's visa to Nauru. And other media tidbits of the day.

Fairfax clean sweep on business noms. Fairfax’s dominance of business journalism, when it comes to Walkley nominations at least, shows no sign of abating.

With the exception of Four Corners’ Klaus Toft, all of the journalists named as finalists in the Walkleys business category work for Fairfax.

Adele Ferguson’s odds of taking out the gong are good again this year, with two of her stories nominated. With Ruth Williams, Ferguson’s stories on NAB are up for a gong, as is her investigation, with Sarah Danckert and the aforementioned Toft, of 7-Eleven’s wage practices. That Four Corners’ episode aired on August 31, meaning it just made the midnight cut-off for this year’s Walkleys, as Crikey has previously pointed out.

The judges for the category are the ABC’s Ros Childs, Fairfax’s Anne Hyland, and the Oz‘s contributing economics editor Judith Sloan. They waded through over 40 entries to settle on the finalists. — Myriam Robin

The vibe, or not. Nationals Senator Matthew Canavan invoked the memory of classic Australian film The Castle while questioning SBS managing director Michael Ebeid about the broadcaster’s support of same-sex marriage yesterday.

He asked Ebeid whether SBS had sought legal advice about their decision to take part in a corporate campaign in favour of same-sex marriage, and when Ebeid said no.

Canavan: On What basis have you informed that view?

Ebeid: It is pure … it comes down to the simple fact of equality, it’s just about equality.

Ebeid: No. It’s about equality.

Canavan said SBS had abused its position as a public broadcaster by publicly committing to marriage equality, a stance he said was not reflective of the Australian audience’s view. Surely the 72% of Australians in support of gay marriage would tell him he’s dreamin’. — Crikey intern Mark Kearney

Greg Sheridan’s fantasy football. The foreign policy sage of Surry Hills turned his attention to the Canadian elections this morning, and managed to make a huge howler in the second para:

“But underlying Canada’s essential moderation, the victor, Justin Trudeau comes from centre-left Liberals, not the more left New Democrats. If anything Trudeau the celebrity resembles Malcolm Turnbull than he does Bill Shorten.”

Well, not quite, Greggy. Canada’s Libs went to the left of the New Democrats after the last election on any number of issues — fiscal policy, most prominently — in which they are neo-Keynesians, pro-deficit budgeters. It’s that leftward move that got them an outright majority, 180 seats in a 338 seat Parliament.

Still, nice go at making a defeat for the right look like a loss for the left. More of this, please. — Guy Rundle

The hour of television took no less than $600,000 to produce, and was funded through a mix of investment from the ABC and Screen Australia. But another $125,000 of the total was donated from philanthropic sources.

“There is a growing awareness in the philanthropic sector that documentary is a powerful tool,” the film’s producer Mitzi Goldman told Crikey last week. “To not just raise awareness, but create social change on the ground. The documentary sector unites the filmmaking sector, lobbyists, and government. It builds empathy and understanding. Because of this, philanthropists are view it as an economical way for people to be fast-tracked into an issue.”

As well as being a producer and director with Looking Glass Pictures, who made the film, Goldman is CEO of the Documentary Australia Foundation. The body has been working on building links between philanthropists and documentary makers for some time. — Myriam Robin

How come he gets to go? The Oz’s Chris Kenny has been allowed into Nauru. The Guardian‘s Amanda Meade reckons he’s the first journalist in 18 months to be let in — other news outlets haven’t been quiet about their inability to obtain visas, even if they paid the $8000 deposit required by the government. Kenny told The Guardian: “If my public support for strong border protection measures helped sway Nauru’s decision, so be it.

“Given concerns about the welfare of asylum seekers and conditions on Nauru I have been trying for six months to gain access … I am very pleased the Nauruan government agreed to my request and I expect full access to people and facilities on the island.”

It’s probably this all over again. Speaking of locking journalists out, Geert Wilders didn’t let any media into his announcement of a new anti-Islam political party yesterday. An announcement is due later today. Last time he was in town, Shakira Hussein managed to make it in — she wrote this for Crikey.

Front page of the day. When in doubt, go to the zoo … 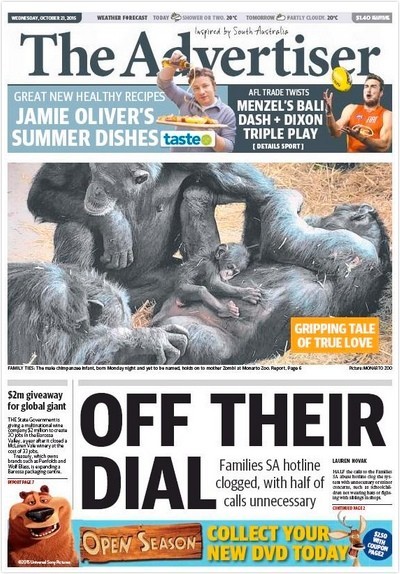 “Embedded on Nauru – by Chris Kenny”

klewi – I thought that you were doing a Santorum there.

Oh for the day when Crikey no longer rejects articles from competent people who don’t toe their line, and sets a tad higher standard for those with whom it does agree.
Perhaps it continues to be, “Until the 12th of Never and that’s a Long, Long Time.”

What are lap-dogs for?

klewi – in historical times, Ming & Aztec dynasties, the lap-dog, Pekingese & chihuahua respectively, was the personal weapon of a aristocratic Lady, vicious little balls of teeth who resented being out of their Mistress’ laps esp when flung at a threat.