Turnbull’s response to the Murray inquiry? Yet more inquiries

In many respects, especially with regards to superannuation reform, the Turnbull government is just kicking the can down the road. 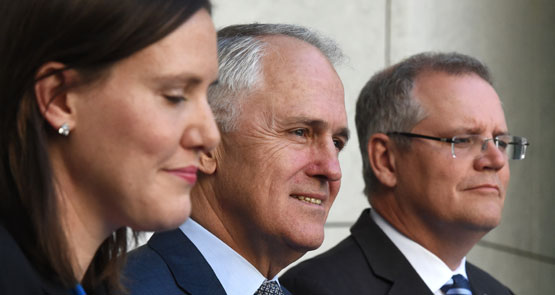 Prime Minister Malcolm Turnbull’s response to the Murray Financial System Inquiry is just to announce yet more inquiries, while making some small legislative changes at the fringes, echoing one of the worst aspects of the discredited administration of his predecessor.

Of course, there was the headline-grabbing decision to crack down on excessive credit card fees (but not the foreign bank ATM penalty fee): shops, taxis, airlines, utilities and other merchants will be banned from imposing surcharges that are greater than the cost of accepting payment by card. This is a big win for the Reserve Bank and the Payments System Board, which has been pushing for years for reductions in fees, especially of late, with the growth in debit cards. But it is also good politics: bashing the banks plays well outside Canberra and among voters.

There was, however, a large element of can-kicking, after some rather big issues were shunted off to the Productivity Commission to examine over the next couple of years — a move that had similarities with the spate of reviews the Abbott government asked the PC to conduct. For example, the Turnbull government will ask the Productivity Commission to develop an alternative model for a “formal competitive process” for allocating default super funds to members. But at least the Turnbull government and Treasurer Scott Morrison took decisions on the 51 recommendations from the inquiry headed by former Commonwealth Bank CEO, David Murray. Tony Abbott and Joe Hockey (who leaves Parliament this week) didn’t do anything for months and — the irony of ironies — were due to release the government’s decisions the week Abbott was rolled by Turnbull.

It was only three years ago that the PC completed a similar inquiry for the former Labor government, so this has a large hint of can-kicking. On superannuation:

“The Government agrees to task the Productivity Commission to immediately develop and release criteria to assess the efficiency and competitiveness of the superannuation system.

“The Government agrees to task the Productivity Commission to immediately develop alternative models for a formal competitive process for allocating default fund members to products.

“Subsequent to the development of criteria and following the full implementation of the MySuper reforms, the Government will task the Productivity Commission to review the efficiency and competitiveness of the superannuation system.”

Despite media hype about the wide ranging nature of the recommendations from Canberra, a lot of decisions haven’t been made, especially in superannuation, which faces at least three years of continuing uncertainty about its nature, its products, fees and its rationale for the country as a whole (and Australians individually). It’s a $2 trillion pool of money being clipped away by more and more people (creating multimillionaire fund managers and others of indifferent ability and skill), and it is going to waste so far as the future is concerned. That will not be addressed until well into 2017-18.

And for the financial system as a whole, the key regulators — APRA and the Reserve Bank — have already done the heavy lifting and moved to improve the resilience of the banking system by forcing the big four banks to raise and hold more capital (with more to come in 2016 and 2017) as new tougher capital requirements, especially for home mortgages, are demanded. The federal government has supported this measure now and in the future. The major banks will have to hold more capital against home loan mortgages because they represent the biggest risks, dominating home lending and with 60% or more of their assets in home loans.

Prime Minister Malcolm Turnbull and Treasurer Scott Morrison talked a lot about making the financial system safer, but it is as safe as the regulators and the banks and other financial groups allow it to be. Thanks to APRA and the RBA there’s a support mechanism called the CLF (Committed Liquidity Facility) in place (which is in addition to the higher capital requirements) which has been backstopping the entire financial and banking system since the start of this year, requiring the major banks and deposit taking institutions to pay for this support. The key parts of the Murray inquiry (apart from the higher capital buffers for the banks) has been aimed at easing the wasteful frictions, poor regulation, weak management and poor oversight that still bedevils much of the system, especially superannuation.

But as detailed in the second Financial Stability Report for 2015, released on Friday by the RBA, there are large questions about the prudence of many banks in home lending, and perhaps some areas of commercial property. It took tough action from APRA earlier this year to force the banks to open their books on home lending, especially to investors, to reveal the full extent of the slide in lending standards and growth of dodgy loans. That can’t be legislated against.

Another announcement is the government’s intention to legislate to allow crowd-sourced equity funding. The devil will be the detail/draft legislation, but it is something that the start-up sector has long called for, and it  has the backing of the Labor opposition.

But there was one recommendation rejected: the one prohibiting limited recourse borrowing arrangements by superannuation funds. That decision was signalled earlier in the year by Josh Frydenberg, when he was assistant treasurer to Joe Hockey, and it is one kept by Morrison and Turnbull. But it was a prohibition strongly supported by the two key regulators, the RBA and APRA, which fear a build-up of leverage risk in self-managed super funds, which have borrowed to invest in assets such as housing. It is part of the reason for the explosion in investor borrowing in the past couple of years, especially in Sydney and Melbourne, and there is no doubt that allowing of such borrowing has added to the rising level of risk in the financial system, as the RBA highlighted in its Stability Report last Friday.

The decision not to agree with the prohibition recommendation has not made the financial system safer, as the Prime Minister and Treasurer claimed their package would do. It is a significant negative from this government.

“Shop around – ’til you get an opinion you like”?

Holding an Enquiry to fine tune Legislation the Government has told us it intends to introduce instead of sitting on their thumbs until the Bill is presented to Parliament? How dare they avoid their predecessors’ approach where The Greens Dog waving its Co-conspirators Tails performed such artistic somersaults over Pink Batts, the BER and more.
Vale Crikey’s independence / analytical investigation / and all which once made it a great (admittedly capitalist) entity.

Good report, Glenn. But then, what did you expect? The rich in the Coalition are just looking after their mates, as usual!
Nothing has changed from the Abbott days!!

CML, when you say (in relation to Governments’ approaches to unfair aspects of Superannuation Schemes) that “Nothing has changed”, are you genuinely unaware of the extent to which Parliaments of all flavours have failed to tackle the issues seriously, because they realistically fear the co-ordinated onslaught there’d be from the various components of the influential Chattering Classes?

I’m with Norman, I’m sick of this Turnbull is great stuff, he’s no different to the rest of his party looking after his own. Why has there been no mention of labor’s stuff up in allowing turnbull’s transparency bill passing the senate? We’ll never know now if he was telling the truth about his tax affairs.