Backbencher in the front seat. In Monday’s Media section of The Australian, Senator Eric Abetz — who was dumped from the ministry and leader of the government in the Senate after Malcolm Turnbull became prime minister — whinged that the media “demonised” conservative policies like demonising asylum seekers, or demonising gay people. He said he was often referred to as the “religious right” but he said the “godless left” — by which he seemed to mean anyone to the left of him — didn’t come in for media criticism.

Crikey‘s own Josh Taylor was on his way to the press gallery yesterday to report for this very “godless left” publication spotted Abetz on his flight from Melbourne to Canberra. The former minister did not pick up a free copy of The Australian containing his spray on his way in. While the leadership change has forced Abetz to now sit on the backbench, it appears he is still flying high, in the front row of business class for the flight. He was seated on the right side, of course, near the seat usually reserved for Bronwyn Bishop.

Ms Tips is hopeful that Abetz’s removal from the ministry means he is now free to return to his first love: grilling the public broadcasters over alleged bias in estimates hearings. SBS is up today.

The seat of power. Malcolm Turnbull and Foreign Minister Julie Bishop are fond of joking about the distant prime ministership of 25-year-old assistant minister for innovation Wyatt Roy, and when Roy was spotted in the prime minister’s chair yesterday, Ms Tips wondered whether all the talk might have gone to his head. But it turns out that he was just using the seat to charge his iPhone. 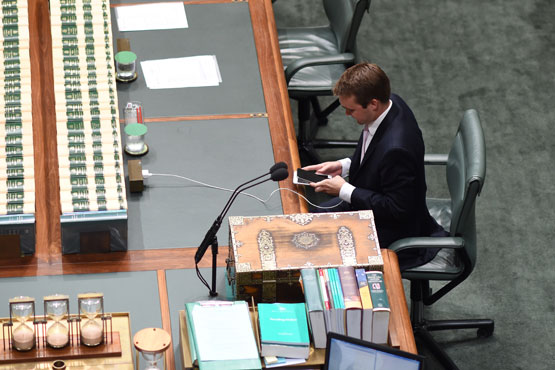 Much ado about parties. Estimates have revealed that Parliament House cleaners did not get access the cabinet “ante-room”, site of the now-infamous party on the Monday night of the spill, until the following Friday. But Senator Cory Bernardi said it shouldn’t have been called a party.

“I’m not sure it should be characterised as a party … it was a farewell to loyal staff, I think is probably appropriate,” he said.

Attention later turned to wine purchased for the former prime minister. For the “farewell to loyal staff”, it was revealed last night that ministers raided still-prime minister Abbott’s stash of wine, paid for on the taxpayer dime. Labor’s leader in the Senate Penny Wong asked about her attempt to get a list of wines purchased on behalf of the PM under freedom of information. The result was largely redacted receipts where only the size, type of wine, and the price were included.

It was “personal” information to include the brand of the wine. The Department of Prime Minister & Cabinet’s FOI officer in the estimates hearing did not go further into why she believed that the types of wine purchased by the PM was considered personal. Any idea what the former PM likes to drink? Get in touch.

The light on the hill. While Malcolm Turnbull seems to be retaining many of the environmental policies of his predecessor, during his time as environment minister during the dying days of the Howard government, Turnbull was quite a leading advocate for acting on climate change. He led the charge on phasing out incandescent lightbulbs, much to the chagrin of many. One tipster tells us that shortly after the announcement, Turnbull’s staff went to a local lightbulb shop and bought out their entire stock. Perhaps the lights will soon be shining bright in the Lodge?

Parliament House is bugged. Canberra is again in the grips of the annual Bogong moth migration, as the big-winged beasts head south for the summer, taking refuge in the cooler climates of the Australian Alps. Like most in Canberra lately, the Bogong has a short life span — just one year. But before making their last flight, the whisper of moths (a strangely pleasant collective noun for such a monstrous creature) makes a traditional pit stop at Parliament House, and the dreaded moths have already been spotted in Crikey‘s Canberra satellite bunker.

This year the matter has been made worse by a bag of wool in the office of Minister for Health and Sport, Sussan Ley. She took to Twitter to say the fleece, a souvenir from her electorate of Farrer, is responsible for a moth infestation in the ministerial wing. 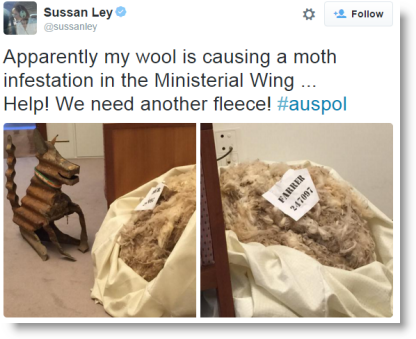 What’s in a name? Ms Tips reported that during the six-hour Coalition joint party room meeting on same-sex marriage, journalists were kept away from the action with a barrier established to keep hungry and impatient journos at bay while Coalition MPs ultimately delayed legislating to allow same-sex couples the right to get married.

The barriers came up in estimates hearings on Monday, with Senator Bridget McKenzie confused as to why other senators were calling the barriers “bollards”. “It’s what you see in airports,” McKenzie said.

The senators ultimately decided that the term should be “pedestrian control barriers.”

Tablegate update. When former Prime Minister Tony Abbott announced dual nationals could be stripped of their citizenship for damaging Commonwealth property, he probably didn’t foresee his own people could be at risk of deportation for damaging a marble coffee table in Parliament House during a raucous party on spill night.

While it doesn’t appear there’ll be the same recourse for the offending party, one could excuse Minister for Cities Jamie Briggs for locking up his passport (though the citizenship-stripping bill was ultimately stripped of that provision). Briggs was seen in a wheelchair the morning after the incident, though he says he injured his leg while running.

Details of the coffee table’s demise dominated yesterday’s Senate estimates hearing in a discussion that sounded oddly familiar. Crikey is wondering whether the table had exhibited signs of structural weakness, and whether a crack — or a leak — could be blamed for its premature collapse. Although Department of Parliamentary Services staff said they couldn’t be certain, we think the base might have given way.

But fans of the original table need not dismay: instead of binning it, the maintenance crew has simply ordered in a more expensive, more popular replacement.

In a final gesture, Abbott has agreed to pay for the cost of a table.

Tablegate update: As usual Tony has agreed to pay for it only after it became a matter of public knowledge and after the lounatic right (personified in this case by Corgi Bernardi) tried to shift the blame to someone/anyone else; including the table itself.

Abetz should be grateful that not all the capitalist media is as bad as Crikey.

Would this be the only occasion in the past two years that Abbott & LNP MPs haven’t laid blame with the previous Labor government?

Note there was no Champagne (or even sparkling) on the former prime ministerial bill. But I guarantee plenty others were drinking it at alternative venues that evening.

A likely reason for redacting the names of the wine would be to avoid falling into the trap of wine companies using the information in their promotional activity, followed by truckloads of wine being offered for free by wine companies for marketing purposes.

Which would give us all more ammo to slag off our members for taking bribes. Calling such information “personal” gets the issue out of the way.

small niggle – could crikey please refrain from amerikanism’s like (sic!) step up to the plate (crease), on someone elses dime (quid) and the truly appalling ‘bathroom’ for shithouse?
Nice to see that no wine was less than $26 – more than I have ever paid in my long life.