Kathy Jackson has betrayed the union and those who were counting on her, no matter what eventual charges she might end up facing. 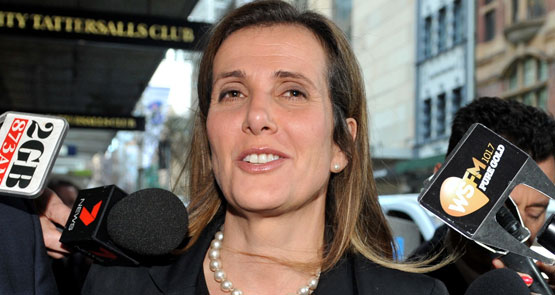 The eyes always got you. They were gleaming, a little too bright, a little too mischievous. Kathy Koukouvaos, as was, Kathy Jackson now, was an impish spirit who brought a degree of liveliness when she rose to “prominence” in student politics in the early 1990s. She was from the Left of Labor at a time when Labor was split, and so office-bearers from Left and Right were twinned. As joint health and services officer, Koukouvaos shared office, and an office — a pretty cramped one — with a Bunterish young man named David Feeney, of whom no more has been heard.

Koukouvaos appears to have developed a taste for whistleblowing early; a House and Services plan to abolish the Student Union catering department (with its unionised workforce) and replace it with a food court, to be anchored by a Hungry Jack’s, mysteriously found its way to the non-Labor left.  Developed a taste for politicky politicking too; she soon departed the Left for the Right, a shift essential to her subsequent rise through to the head of the Right-dominated Health Services Union. When Jackson emerged blinking into the news in 2011 — with accusations of corruption that backfired badly against her — the public got to see those eyes, ad nauseam. When she emerged from one of the hearing rooms she has spent the past five years frequenting, she explained the existence of a “slush fund” that had been turfed up as “something you need to keep the aliens away” from the union, a reference to the bitter splits in the Right that occurred parallel to Koukouvaos/Jackson’s rise. Glimmer, glimmer.

That’s the full Jackson act we have become accustomed to: total self-righteousness, accusations of a vast conspiracy, the vague sense that a private reality is being accessed. But nothing really prepared us for the Four Corners report last night, one of those 45-minute glories that will still be captivating in 20 years’ time, an extravaganza that might as well have been titled At Home With the Ceausescus. My god, what was it like in the Four Corners office when the Jackson-Michael Lawler duo said yes to open-rolling filming at their house? Corks popping, I imagine. The 45 minutes that eventuated, in which this unboundedly self-deluded couple wander around their lovely home talking about the conspiracy against them — for which no evidence is offered — correcting each other, Lawler talking about their meeting as “an accident in my life — and by accident I don’t mean mishap”, is nothing less than a crisp study in folie a deux, at the end of an era in Labor/union politics, when all such stuff was possible. And what was the reaction when they agreed to provide their holiday home movies? Lawler’s five-hour video diary? His hours of taped phone conversations? There is not enough champagne in the world to mark that get.

Jackson spent more than $1.4 million of HSU money on holidays, gifts, art, fine dining, etc. She claims she was legally entitled to spend the money as she wished. Continuing police investigations, and, possibly, subsequent charges and trial, will determine the truth of that. Lawler stands accused of favouring the HSU in his role as Fair Work Commissioner, failing to reveal his relationship with Jackson for a number of months, a period in which he ruled on HSU matters. Both stand accused of benefitting from Lawler’s power-of-attorney relationship with ageing Sydney barrister David Rofe. Rofe has the beginnings of dementia, but has still been compos mentis enough to tell Lawler not to use Rofe’s money to put a $160,000 deposit on a house — and to revoke the power of attorney when Lawler did so anyway. How do we know this? From taped phone conversations provided to Four Corners by Lawler himself.

Whatever Lawler was hearing in those conversations to imagine releasing them would help his case, the rest of us aren’t. Whatever Jackson and Lawler thought they were doing for themselves by releasing holiday videos — in which, at a plush restaurant, the camera pans lovingly over an ice-bath full of oysters beside the white-clothed, silver-festooned table — the rest of us aren’t seeing it. In committing to the show, much of it filmed in the house they bought themselves with David Rofe’s money, the pair appear to have revealed that the timing of their relationship may damn Lawler with conflict of interest in his duties, that he has taped phone conversations, possibly abused power-of-attorney, been denounced as mentally ill by Rofe, who has dementia!, and that — unless Four Corners has failed to present it, which I don’t believe for a second — they have no reliable counter-account of the wild spending of HSU money that would go to a conspiracy by their enemies. Hell of a job for 45 minutes. Both having had psychiatric problems since entering this passage of their lives — Lawler has had six months’ leave for depression, Jackson has been in a private psychiatric clinic, and has unsuccessfully tried to claim that multiple psychiatric conditions make her unable to defend herself — it seems more than possible that actual folie a deux, the madness of couples, has taken over. Two people become each other’s sole other: they affirm, feed back and amplify their own self-justifying version of events; the private worldview, passed back and forth, becomes all-encompassing. Eventually, they lose the capacity to test it against a more general reality. That seems to be the takeaway for most people who saw the show.

To which the answer is, well, maybe. Firstly, that Jackson spent a million bucks of union fees by hospital porters, nurse’s assistants, X-ray techs and others on holidays and treats — of no conceivable advantage to members — that many of those workers cannot afford, is simply established. No one trapped or tricked her into doing that. That said, I don’t doubt for a second that people kept a keen eye on that happening, ready to use it against her when they needed to do her down. That’s not a conspiracy, that’s just leaving yourself open. If Jackson has genuinely become delusional about “a conspiracy” it may simply be that she regards “a conspiracy” as people dobbing you in for something you’d been doing for years, under their noses. At one point she says with anguish of those who pulled the very expensive rug from under her:

“All these people we’ve been talking about, they’re all quite real … and they were all friends of ours.”

Yes, Kathy, that’s the best way to convince us of your clear-headedness. Insist that the people you’re talking about are, in fact, real. And note the tone of hurt: these people — other denizens of the Labor Right — were friends of ours.

That’s the real story behind the Jackson disaster, and the Craig Thomson affair that preceded it: the utter decadence, the real moral squalor that has infected sections of the Labor Party Right, and that other sections of the Right have failed to address with any seriousness. This moral decline has deep roots and complex causes, but part of it comes down to the collapse of a genuine Right/Left conflict within the party in the 1980s. The factions remained, but the real differences that had made them a rational form of political organisation had vanished. So the Right, always bound up with capital to a greater degree, simply became a machine without content. The unions that formed its base had been steadily amalgamated into super-unions with a dissolved relation to the particular occupations and workers they represented. In the years of full arbitration and centralised wages fixing, they had relatively little scope to make their own deals. When enterprise bargaining took over from awards-and-demarcation system, workers got the worst of both worlds from such unions: they were quasi state-apparatuses, laced into state power to administer labour, and they had a free hand to make deals with major employers. Their heads and officers came not from the floor, but overwhelmingly from student politics, as the first post-student step in a political career. The distance between leaders and led in right-wing Australian unions, always wide, became cavernous. There appears to have developed a real contempt and disdain for the people they represented.

In the case of the HSU, that disdain is sickening, utterly disgusting. All workers deserve to be properly represented, but there must be a special circle of hell for someone who whacks the plastic to the tune of $1 million-plus from the people who do the grunt work on basic wages, looking after those with chronic illnesses, cancers, and all that flesh is heir to — work that often demands, even from those furthest from actual medical intervention, a bit or a lot more than many others are asked to give in their jobs. To represent such people should be a privilege and an honour, the cornerstone of a meaningful life. To turn it into a freeloaders’ picnic is not the only example of the decadent and diminished place the Labor Right has come to, but it’s one of the most visible. This is more than just taking a bit off the top. This is the betrayal of a membership — and of a wider political movement. Labor is soft at the centre because the Right is soft at the centre, a quagmire made by two decades of the cynical politicking and character deformation of which Jackson is an example.

God knows what comes next in this saga. None of these people are fools, so I’m not necessarily going to take the apparent folly of their opening up to the nation via the ABC at face value. It is very strange to see the people you once knew suddenly in the news, their public fate bracketing off half a life, making you think of your own. Having been blindsided by these types more than once before in the 25 years since we were all jammed into the Melbourne Uni student union together, I have a real respect for their cunning, none at all for their integrity. But for all the successes and failures one has in a period like that, all the regrets and missed opportunities, I could go down on the floor and thank the heavens I didn’t fuck up my one chance at a decent life the way Kathy Jackson has — debauching her own union, and then spending years in mind-spinning legal games around it. If she wants to come out of the dark places she appears to be spending a lot of time in, she should just give us the full straight story, rule it all off, and, until charge, acquittal or prison intervenes, go work minimum wage somewhere as penance. I hear Hungry Jack’s is hiring.

Bizarre – that sense of entitlement – from the union paying for her/their foreign holidaze as “travel” – it just kept spiraling?
What odds two people like this ever meeting in the real world?

Brilliant, Guy. No other word for it.

I watched entire show with my jaw scraping the carpet. And you caught it. Good on you Rundle.

Very good article Guy. I have to admit my jaw was hanging open with disbelief. This has to be the most monumental example of ‘Chutzpa'(sic?)the world has ever seen.