One aspect of APN's new subscriptions offer has raised eyebrows. And other media tidbits of the day.

APN paywall, with News Corp goodies. Well, this is it. Today APN rolls out paywalls across the websites of its rural press empire. This will affect a dozen daily regional papers in Queensland and New South Wales, which will now operate a soft paywall, with readers able to read 10 articles before being asked to sign on.

To lure readers over the paywall ($6-$8 a week, half-price for the first six weeks), APN is offering a grab-bag of goodies along with a subscription. They include subscriptions to Fox Sports and The Washington Post. This follows a trial run started in August that included a similar offer at the Toowoomba Chronicle.

But one aspect of the subscriptions offer has raised eyebrows. Subscribers to APN’s daily titles will also get a subscription to News Corp’s Courier-Mail, or, if the APN title is in New South Wales, of The Daily Telegraph. The subscription will include website access and a weekend paper, as well as all the perks available to News Corp tabloid subscribers.

Over at the Australian Newsagency Blog, Mark Fletcher notes that APN’s CEO, Michael Miller, takes over as executive chairman of News Corp Australia soon. He wonders what role Miller had in facilitating the deal. If an APN subscription now automatically makes one a News Corp subscriber too, perhaps there are questions to be asked about how independently the two companies operate.

“Newsagents selling the Daily Mercury are left wondering about the move,” Fletcher wrote. “Should they be concerned for the future of the masthead or is the Courier Mail tie-in icing on the cake with their local masthead the main focus?”

“One newsagent drawing my attention to this issue commented: ‘The demise of the local paper just accelerated.’“

Questioned on what commercial arrangements existed between APN and News Corp, and whether Miller had any hand in negotiating the deal, News Corp declined to comment. APN regional media chief Neil Monaghan said the company was constantly in discussions with other media companies to “collaborate where it makes sense and where it will benefit readers”.

“[Our] digital subscription package is all about providing the best value for readers, which we have been able to deliver through commercial agreements with The Washington Post, News Corp Australia and [Foxtel streaming video-on-demand service] Presto. We are also in discussions with other potential partners about further value we can bring to the subscription package.”

APN has a number of arrangements with major media companies around its regional papers. It shares print distribution resources with News Corp, and in New Zealand it has similar arrangements with Fairfax. Crikey understands discussions around the subscription package began in 2014, and were mainly led on the APN side by Monaghan. It’s understood the ACCC was made aware of the arrangements and has raised no objections. — Myriam Robin

Gordon swoops on Nine. The TV landscape changed this morning when Bruce Gordon’s WIN Corp swooped and emerged as the biggest shareholder in Nine Entertainment Co after buying nearly 15% of Nine from the stake held by US hedge fund and private equity group, Apollo (leaving it with just 9%). The short statement from Nine said the purchase of the stake by WIN is expected to be settled on November 9. This means that WIN is now a major shareholder in two of the three free-to-air TV networks in the country — Nine and Ten — where it also owns 14.9%.

In its statement WIN said:

The immediate reaction was that this was Brice Gordon seeking a bit of insurance in case the ACCC approves the Foxtel swoop on Ten (which will reduce Gordon’s leverage at Ten, although he is one of three billionaires — with Lachlan Murdoch and James Packer — who guaranteed the $200 million line of credit provided to Ten by the Commonwealth Bank in late 2013). It was also seen as Gordon positioning himself ahead of any changes in media laws by the Turnbull government. — Glenn Dyer

Everything must go! Standby for yet another round of cost-cutting in the competitive UK newspaper sector as a continuing downturn in print ads wreaks havoc on finances, and profit and loss accounts. Trinity Mirror — publishers of the daily and Sunday edition of the Mirror — last week put 28 jobs on the block as part of its continuing campaign to cut costs to meet the slide in job ads. It is looking for cuts approaching 100 jobs in its current campaign, most of which will go through either retrenchment or natural attrition.

Management at The Guardian warned staff to curb costs and help them look for savings because of what, according to a memo, “is shaping up to be one of the most difficult trading periods we’ve faced in many years”. And Rupert Murdoch says Britain is one of two key areas (along with Australia) where the family’s News Corp is facing ad revenue challenges.

The slide has been evident since earlier this year and despite hopes that it would ease over the northern summer, that has not happened.  On some weekends in the past four months, print ad volumes in UK dailies were down 20% or more. Guardian News and Media CEO David Pemsel told staff in a memo published on the Press Gazette website that:

“For the whole sector, the UK market decline in print advertising could be 20 per cent this year. Most publishers are also reporting a significant slowing in the rate of digital advertising growth as spending migrates to the likes of Facebook and Google at a far faster rate than previously seen.”

And while Guardian Media Group currently has cash reserves of 840 million pounds — and these could rise to above 1 billion pounds (over A$2 billion) when it sells its share in Top Right Group — Pemsel warned that these reserves are “finite and modest by some standards”. Print sales of The Guardian fell more than 7% in September to 166,977, while website traffic grew last month to 8.4 million a day (on different devices), which was up a solid 29% from September 2014. But ad revenues from digital are not keeping pace either. — Glenn Dyer

Oops. Rugby is the only sport the AFR deigns to cover (not that Crikey can talk), so you’d think they’d at least get this right. Page 2 of today’s Fin … 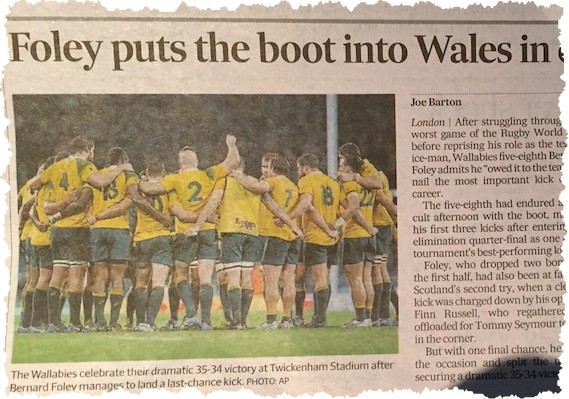 The “Wales” was changed to the correct “Scotland” in later editions.

Video of the day. Alain de Botton ponders what public broadcasters should do to promote the public good. His prescription: less programming on history and the high arts, more creative programming on the greatest ills confronting society …

Oh please. Alain de Botton? Really? Is Crikey promoting that twat now too? How do I cancel my 21 day free trial?