Key architect of the Excellence Program to advise Turnbull on arts

The news that Michael Napthali will become the Prime Minister’s arts adviser has dismayed many in the cultural sector. 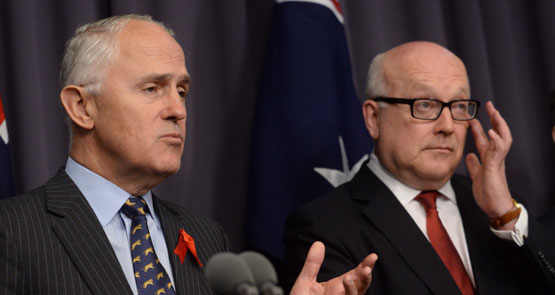 The arts adviser who helped develop the federal government’s controversial National Program for Excellence in the Arts (NPEA), Michael Napthali, has moved to Malcolm Turnbull’s office as an arts adviser.

A spokesperson in the Prime Minister’s Office confirmed to Crikey yesterday that Napthali’s new role would be as an adviser on “arts, communications and intellectual property”.

Napthali was an arts adviser to former arts minister George Brandis. He is widely considered to be a key architect of the Excellence Program, which will strip $105 million from the Australia Council over the next four years.

The news that Napthali will become the Prime Minister’s arts adviser has dismayed many in the cultural sector, who fear that his influence will ensure the continuation of the Excellence Program, and its associated attack on Australia Council funding.

The funding cuts have already led to upheaval in the arts sector, as the Australia Council has been forced to cancel and re-advertise its most important funding program for smaller organisations.

As Crikey reported back in June, Napthali has become a controversial figure in the cultural sector. He is considered to be hostile to the Australia Council, and to smaller and more innovative arts organisations.

In a meeting with Sydney musician Claire Edwardes in June this year, Napthali made a number of highly critical comments about the Australia Council, labeling it “a club that has been giving taxpayers’ dollars to the same types of people making offbeat art for too long”.

According to Edwardes, Napthali told her that the general public wanted to see arts funding going to classical music and the major performing arts organisations. He also disclosed that the NPEA would not be open to individual artists, a detail since corroborated by the release of the NPEA’s draft guidelines. At the time when Edwardes spoke to Napthali, the draft guidelines for the NPEA had not yet been released.

Perhaps most explosively, Edwardes told Crikey that Napthali explicitly admitted that the aim of the Excellence Program was to give the arts minister more control over cultural funding. “[Brandis] wants to have control over the recipients of this fund,” Napthali is reported to have said.

When Crikey approached Brandis about Napthali’s role in the AWO funding decisions, we were told that Napthali was “not involved” in the decision to fund the orchestra. In November 2014, Brandis described the AWO funding as “one of the happiest things I was able to do in my early days as the arts minister”.

Arts sector lobby group Free the Arts told Crikey the group was “shocked” to hear of Napthali’s appointment. Norm Horton, a spokesperson for the Free the Arts campaign, said “this sends a terrible message to the arts sector about the Turnbull government”.

“In his role as adviser to the former arts minister George Brandis, Napthali was chiefly responsible for the botched rollout of the NPEA,” Horton continued. “The failure of Napthali to consult in his previous job has caused enormous damage. His appointment is an insult and casts a big shadow over the efforts of new Arts Minister Senator Fifield to repair the government’s relations with the arts sector.”

Tamara Winikoff of the National Association for the Visual Arts told Crikey she had thought the government would seek better advice.

“Given the mess made to arts funding arrangements by the previous arts minister, I would have expected the new Prime Minister to want to make a clean sweep,” Winikoff said. “In order to ensure he gets the best possible advice, the new Arts Minister has indicated he will undertake a broad arts industry consultation. This along with research was missing the first time around.”

The Greens’ Adam Bandt also criticised the appointment. “Malcolm Turnbull has a golden opportunity to rebuild the government’s relationships with the arts sector for $0, but I’m worried he’ll be taking advice from the wrong people,” Bandt wrote in an email.

“Scrapping George Brandis’ plans for the NPEA and restoring the $105 million to the Australia Council would do wonders for Australian artists and art-lovers without any extra cost to the Budget. But if Turnbull continues to take advice solely from the big players, he should expect the same ferocious attack from the community that brought down former Arts Minister Brandis.”

Napthali’s appointment also deepens the concerns of the smaller players in the cultural sector that Turnbull will continue to hear about arts policy mainly from people involved in the major cultural organisations — such as his friend David Gonski, chair of the Sydney Theatre Company. Napthali is also proponent of more government funding for classical music.

The mystery of the missing coin

Of course, “The news that Napthali will become the Prime Minister’s arts adviser has dismayed many in the cultural sector.” why wouldn’t they be alarmed that their Taxpayer Funded personal milch cows were facing an inspection?

Why is anyone surprised?
Who can afford to frequent the opera, ballet, symphony concerts and other top of the tree performances? The rich, of course.
Now what was that about Turdbull ‘being concerned for the workers’ of this country? Cr+p, that’s what it was!!!

Why are we surprised? Turnbull will eventually be recognised for what he is by you cheer squad in the msm.

If the Australia Council had ever considered entertainment or pleasure to be part of their criteria for funding small to medium art and theatre, people might care more.

Starve in a garret and produce something of worth, sez me.