Is the housing bubble about to burst? And should we freak out about it?

Yes, Sydney housing prices are skyrocketing. But does that mean it's all about to come crashing down? 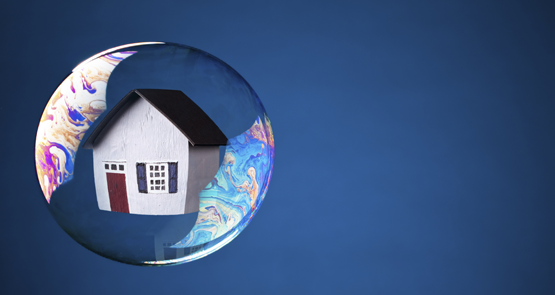 Is a housing price crash really going to send Australia into recession?

The short answer is probably not. The longer answer is pretty interesting, I reckon, so please, keep on reading.

There’s two questions here. Will we have a housing price crash? And if so, will that send us into recession?

Both are hard to answer. But here goes.

The idea house prices can keep growing at recent rates seems crazy. The perfect storm of record low interest rates and free-flowing Chinese money must come to an end at some point. Are we in a bubble yet? As a rule of thumb, when a price graph gets close to vertical — like Sydney in the graph below — that’s a sign of a bubble. 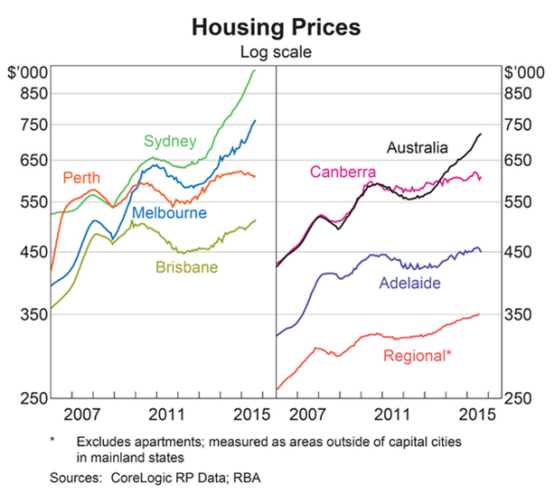 But this graph reveals many shades of truth.

And that complicates matters. While Sydney is part of Australia’s housing market, it’s also in the global housing market. Arguing Sydney’s house prices are too high requires us to turn our eyes to comparator cities. Abroad, we find highly desirable cities have very high house prices.

I make these points not to defend Sydney’s current house prices, only to point out that the “correct” level is very difficult to determine.

Never believe anyone who claims they can predict asset prices. After any crash, there are always grinning pundits that predicted it correctly, but that is only because so many pundits make so many predictions.

You can’t talk about house prices without mentioning the ratio of house prices to income, which has risen enormously. But that could be explained, too. People earn more, houses are funded on two incomes, loans are easier to get, and you could be more confident in a stable economy to repay a big one.

Every argument for the bubble has a rebuttal. Nothing is obvious. Anything could happen.

By this point I hope to have led you to a place of uncertainty on the future direction of house prices. Now I intend to do the same on their impact on the economy.

Australia’s banks, its fair to say, are generally safer than those in the United States and Iceland. A stress test late last year modelled what would happen to banks if house prices fell 40%. Banks would survive, although the test caused some concerns, and now banks have to hold even more capital.

So while there would be a lot of panic, a huge house price crash would not cause the big pillars of our banking sector to crumble. That means the impact of a house price crash should be mainly limited to effects in the real economy, not in the financial sector.

In the real economy, we find a much more mixed picture.

Lower house prices could be good for the economy — they would free up money for us to spend on other things. At the moment, fewer Australians own their place outright than has been the case for many years, and more and more rent. All that money going to mortgages means less to spend on other, job-creating consumption. 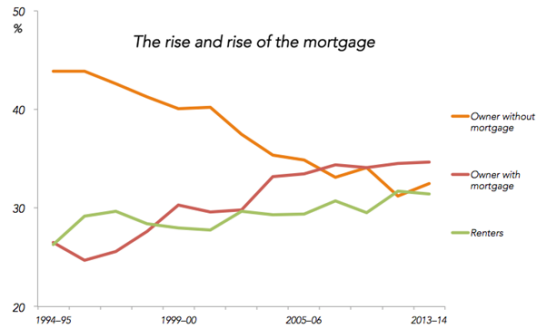 The deputy governor of the Reserve Bank, Phil Lowe, has pointed out until we can make more land, higher house prices tend to make some people rich at the expense of others. Lowe said this in August:

“From the perspective of society as a whole, much of what is gained on the one hand is lost on the other: there are windfall gains from higher land prices but then everyone pays more for housing services … it is arguable that the main impact of higher land prices is not really to increase our national wealth, but to change the distribution of that wealth.”

He pointed out that even the rich can be trapped on the money-go-round. Some older people who own their own homes are helping their children obtain homes. And this will only get worse if house prices keep rising:

“Fewer parents will be able to use the capital gains that they have benefited from to boost their own consumption. Instead, in effect, they will be using those capital gains to support the following generations.”

But of course, a house price crash will not be a huge emancipation party for all generations. High house prices can help the economy. They boost bank stocks and encourage construction.

If you own a house and the price of it goes up, you tend to happily spend more. RBA evidence suggests that if your house goes up in value by $100,000 you will spend $6000 more on cars than if it hadn’t gone up. The same sort of effect is likely present for other types of consumption.

So if we see house prices come off by 10% or 20%, consumption will fall, consumer confidence will ebb a bit, bank stocks will tumble, and people will focus on paying back their mortgages.

But most likely at that time, our dollar will fall and the RBA will cut rates and the economy will still grow. So long as prices fall only a little and banks don’t fail, we may yet dodge a recession.

If that happens, parents might be able to stop helping their kids get on the property merry-go-round. Those kids whose parents don’t own property will probably be very thankful for that. 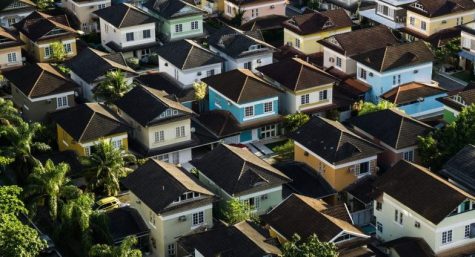 Housing: if it walks and looks like a bubble, it’s a bubble

What is the point of a logarithmic scale graph that takes into account only the boom years?

Taken from 2000 or 1990 and you can see the true scale of the idiocy. Two chances at deflating and it was willingly pumped up again.

There are a couple of canals in Amsterdam where we have price data for the same houses for almost 400 years.

What’s the value of Crikey articles on this until those responsible achieve at least a glimmering of understanding re such disciplines as statistics and supply & demand factors?

It would take a bit of that “brutal honesty” to admit to the taxpaying public that as our ageing wage earners retire, we will be unable to afford those extortionate rents, and will instead be requiring that the public purse subsidise our rents. Currently rental support is only $60 a week, though the landlord may be demanding $400, so don’t complain that we haven’t been saving up for our old age.

To be more precise, the rent subsidy would be supporting our landlords, and through their extortionate mortgages, subsidising the bankers, whose needs you laud. However the gaping subsidy must come out of someone’s gaping profits, and it won’t be the ageing wage earners’ for much longer.

No, it won’t be Mr Morrison who will be warning the taxpayer about looming rental support. But if there are any independent candidates wanting the votes of a very large number of ageing rent payers, we are here, already resenting the rent. We are waiting for you to stand up and promise us the rent subsidy that we deserve, and the profiteers cannot afford us to have.

Roger, a more useful, to use your words, “brutal honesty” would be to acknowledge that Australians have never paid sufficiently high taxes to take care of those who would be needing help, and that our expectations of large lavish accommodation can’t be covered by Taxpayers anyway.
Blaming Landlords is an intellectual cop out; but it has always been a popular one, so it’s unlikely to lose favour as Australia’s largely self-inflicted economic plight increases.
Of course your mentioned “independent candidates wanting the votes” will (as is customary nowadays) will proclaim they have the answers — and sadly many of them will genuinely believe their own nonsense.