Even the losers: will Hockey go quietly, or will he pull a Rudd?

Joe Hockey is expected to leave politics tomorrow. But will he be sniping and undermining from afar? Crikey intern Mark Kearney looks at ex-pollies who wore defeat with grace -- and those who didn't. 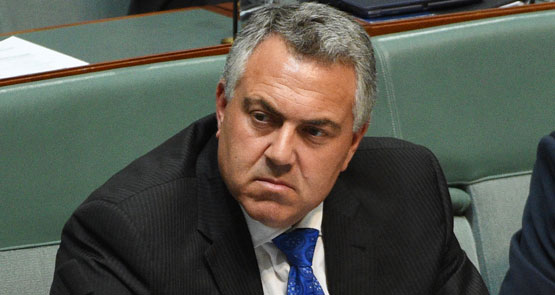 Moments before concluding his (first) concession speech as prime minister, a visibly upset Kevin Rudd went off script. Not an unusual move from the ex-PM. He diverted from his list of achievements and expressions of thanks to note he was still the country’s leader for another 15 minutes.

“Watch out,” he warned. “Anything can happen, folks.”

Hindsight enables us to see those words as a sign of things to come. The two years that followed, before Rudd finally resumed the office on the eve of the 2013 election, were marked by constant leaks and turmoil as he tried to destabilise the Gillard government. Rudd was not going to accept defeat gracefully. In fact, he wasn’t going to accept it at all.

Since Rudd’s first departure from the office, Australia’s conveyor belt approach to leadership has brought down two more prime ministers and several cabinet loyalists. After losing the Treasury portfolio last month, Joe Hockey announced he’d soon leave the Parliament. His final speech is expected to be tomorrow. How will he choose to go out? Will he adopt a Rudd-style exit, full of foreboding, or will his departure resemble some of his colleagues’ more considered responses to political defeat?

Defeat proves to be difficult fit for many, not just Rudd. It’s like the ugly woollen jumper your grandmother gives you for your birthday. You wear it at first because you have to, nodding graciously and feigning comfort. But after a while, it begins to itch.

Tony Abbott, the man who put Hockey in charge of the country’s finances, is already scratching, despite offering a more composed, if sharper-edged, concession than Rudd. He had the benefit of a night’s preparation before his farewell and the result was a well-crafted speech. “There’ll be no wrecking, no undermining and no sniping,” said Abbott at the outset, a promise that fit neatly alongside his trademark loyalty, the same loyalty that required him stand by besieged colleagues Hockey (until the 11th hour, at least) and former speaker Bronwyn Bishop.

But he doesn’t appear bound by that promise. In an interview with 2GB’s Ray Hadley soon after Malcolm Turnbull’s ascension to the top job, Abbott was certainly sniping, asking his followers to vote for new leader “through gritted teeth”.  He also pointedly refused to say whether he forgave Malcolm Turnbull for taking his job. Abbott’s attack on the media’s “febrile” culture of “sour, bitter character assassinations” also smacked of sour grapes.

Julia Gillard’s final speech, on the other hand, lacked the high emotion of Rudd’s, and the disappointment of Abbott’s. That’s because it felt like a formality. Gillard’s undoing had been expected for months.

Her immediate departure from Parliament was followed by a long period of public silence, interrupted only on election night when she tweeted her congratulations to Abbott, and commiserations to the Labor team. It seems she’s abiding by her parting encouragement for Labor supporters to unite behind the party, whoever the leader.

Hockey has also been respectfully quiet since his demotion, an indication he might go without much fuss. If so, he could do worse than looking to the valedictories of other ex-cabinet ministers who’ve opted out of the chamber during the turbulent period of leadership spills.

When Peter Garrett announced he did not intend to stand for re-election after Gillard was replaced by Rudd, his 20-minute farewell to the lower house was a policy-focused and good-natured sign-off. But, as evidenced by Rudd and Abbott’s subsequent behaviour, these speeches can be full of sound and fury but signify little. During his ongoing promo tour for autobiography Big Blue Sky, Garrett called Rudd a megalomaniac and described his treatment of Gillard as “unbelievably poor”.

As summer descends on Canberra, the woollen jumper of defeat is likely to prove a prickly proposition for Hockey. Only time will tell if he can withstand the heat.

Joe Hockey has advantages over Rudd in (for example) he lacks the former’s egomania and perhaps more importantly Hockey hasn’t been inundated with the sorts of blind support lavished by Crikey and other Capitalist Media upon the Rudd/Gillards of Australian Politics.

I think that it is disgraceful that hockey is leaving at all, let alone being promoted to Washington as reported. He’s had his snout in the trough too long already.

Pity he can’t be offered the Ambassadorship to Bukina Faso or similar.
Washington has already had an obese fool & utter failure, have they not suffered enough?

it’s a pity buffoonery is not an Olympic event..this is a bloke who’s leaned on the taxpayer for twenty years and now he wants another lift.. wtf..