Reports that Border Force agents were going to stop people in the street and demand their visas did not come from a "clumsily worded press release", Crikey can reveal. It was the plan. 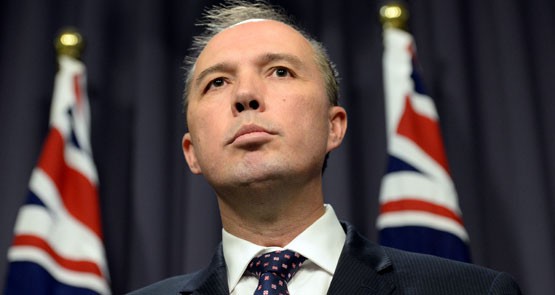 Remember when the Australian Border Force said agents would be stopping people on the streets of Melbourne to demand evidence of their visas? And then after the ensuing outrage the ABF said oh no, they were never going to do that, and it was a “clumsily worded press release“? Documents obtained by Crikey reveal that excuse to be false: the talking points for the event revealed plans to “speak to individuals suspected” of being in Australia illegally.

The failed Operation Fortitude at the end of August sparked a mass protest in the Melbourne CBD after a media release stating Border Force officers would take part in an operation, along with Victoria Police, Metro Trains, Yarra Trams, the Sheriff’s Office and the Taxi Services Commission, to target “everything from anti-social behaviour to outstanding warrants”.

ABF’s regional commander for Victoria and Tasmania, Don Smith, was quoted as stating ABF officers would be “positioned at various locations around the CBD speaking with any individual we cross paths with”.

“You need to be aware of the conditions of your visa; if you commit visa fraud, you should know it is only a matter of time before you’re caught out,” Smith was quoted as saying. The operation was subsequently cancelled.

The government blamed the botched operation on a “badly worded” press release, approved at low levels within the Department of Immigration and Border Protection. The government has said there was never any intention of profiling people, but documents obtained by Crikey reveal stronger language was planned in talking points about the powers ABF officers have to check people’s visas.

The close to 300 pages of documents released by the Department of Immigration and Protection following a freedom of information request by Crikey reveal as early as July, Victoria Police were planning Operation Fortitude and were inviting other agencies, including Border Force, to participate in the two-day operation for “public safety” in Melbourne’s CBD scheduled for the end of August.

Once Border Force agreed to take part in Operation Fortitude, the agency decided to write its own press release because Victoria Police does not do joint press releases with other agencies.

An original draft of the release with the talking points suggested that, contrary to complaints from the department that media misreported the release, the officers were due to be “speaking to individuals who we suspect may be in Australia illegally without a current and valid visa”.

How exactly would they determine who doesn’t have a valid visa? They have ways of making you talk:

“Our officers employ a range of techniques to determine if we think someone is demonstrating traits which indicate there is a need to conduct a more in-depth assessment of their current visa status.”

Tracking changes included in the documents released revealed that while minor edits to this wording was suggested, the talking points were approved.

Smith, did, however question whether Border Force officers would speak to “everyone” they come across during Operation Fortitude.

The release was flagged within the communications and media branch of the department, but only Smith’s name has been released under freedom of information. The names of the other agents were redacted for not being relevant to the request, despite the request specifically asking for the names of officers who approved the press release.

While there was no sign off, the ministerial portfolio media did list the event as a “hot topic” on the morning of the planned press conference.

As media picked up on the release, and outrage grew, Dutton’s office, rather than responding to media, told Border Force to direct media to go to the press conference.

“Some outlets can’t attend the presser and certain allegations are already gathering steam online and on social media,” an officer in the department responded.

Dutton’s staff confirmed that they had originally received the release and said they were getting an “onslaught” of calls suggesting the ABF was racially profiling people and Australia was “a police state”.

For the actual plan of the event, the officers were supposed to line the iconic steps of Flinder Street Station during the press conference to show “strength in numbers”. The talking points for the planned 20-minute press conference reveal a show of force.

“And for those people who are intent on causing trouble — the message from all of us is clear — act responsibly! If you break the rules expect to be caught by one of the Operation Fortitude team.”

The report of the incident included in the documents stated that a number of officers were upset at being profiled at the event, but they did not feel threatened during the incident.

“[redacted] advises some officers upset, they had been photographed on arrival at the media event / protest.”

The documents were released to Crikey and posted online at 11:30pm AEST on Monday evening, conveniently just after the Department of Immigration’s appearance at estimates hearings had ended, meaning officials could not be questioned on the released documents. In the morning, Quaedvlieg and Pezzullo both made statements to the hearing that they had taken full responsibility for the media release and subsequent backlash at Flinders Street Station.

Pezzullo told the hearing that although he personally did not receive the release, executives in his department approved the release, but it was easy for the minister’s office to miss it:

I would not want it to be thought or the impression to be left that it was just that the minister’s office got this email out of the blue. It was a fairly routine circulation of a media release and talking points pertaining to what was considered to be an upcoming routine operational matter.” 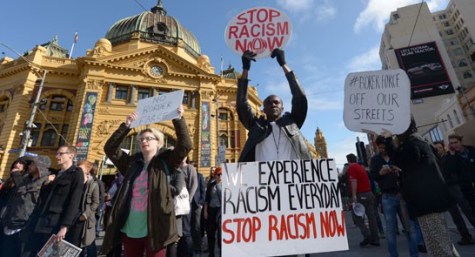 Dutton is a bad penny which continues to show up.

Is Turnbull keeping Dutton on as a massive dangling turd so he can boast of a clean slate when he finally drops the wanker pre the election? I can’t think of any other reason why this bully-boy moron continues to hold a position of influence.

Wobbly @ #3, or perhaps Turnbull is keeping him at the forefront so, purely by comparison, other ministers appear competent.

Wobby – what an appalling image, wanking a turd.
Either that or try to polish it.
Or the sphincter whence it emerged, a party that prefers a crook to a thug.