Operation Border Farce Sorry. Remember Operation Fortitude, when the Australian Border Force was going to check the visas of everyone on the streets of Melbourne? Except then they said they weren’t going to do that at all, it was all a misunderstanding based on a “badly worded” press release? The head of the Department of Immigration and Border Protection, Michael Pezzullo, is terribly sorry for all the bother. In a Senate estimates hearing today Pezzullo and ABF Commissioner Roman Quaedvlieg apologised for the farce.

“It is clear that the media release issued that morning was very badly worded, and gave rise to the impression that the ABF has general powers of questioning people in the street; it does not. I apologise for the wrong impression it created. In the end the Commissioner and I are fully responsible for the department, and the ABF, and we in the end are accountable for this regretable incident.”

Quaedvlieg said ABF was only a “secondary” agency to Victoria Police in Operation Fortitude and the release was just wrong:

“Unfortunately in the case of Operation Fortitude, the ABF release a complementary media release which was factually wrong in describing its role. This resulted in public confusion, concern, and distress, for which I apologise.”

All the recommendations of an internal review have been implemented, he said, with several staff formally counselled.

Crikey has an FOI request in to the department on the creation of the press release. It was due at the end of last month, but a 30-day extension was granted while the department consults third parties mentioned in the documents (i.e. Victoria Police).

The case of the missing crockery. Observers at Senate estimates this morning were left briefly wondering whether Bronwyn Bishop had absconded with 60-odd pieces of the Queen’s Dining Set, which had mysteriously vanished between a May 2014 stock take and her departure from the speaker’s chair.

The Queen’s Dining Set — all 248 pieces — had shrunk by 68 pieces when Bishop left office. “What happened to the 60 odd?” Senator Penny Wong asked. “Did they get returned or broken?”

It took a while, but Department of Parliamentary Services staff did finally inform the Senate the missing pieces had been found — in storage.

“There were no broken pieces. A stocktake was done in the speaker’s suit on the 6th of August. The new speaker was sworn in on the 10th of August.”

Penny Wong asked: “Does he still have the crockery?”

“As far as we know they’re there.”

With that mystery solved, Wong moved on to the mystery of the marble table. Apparently on the morning of September 15, DPS cleaners found “remnants” of a marble dining table in the cabinet room. Of course, government MP Jamie Briggs was seen in a wheelchair after the revelries on the evening of September 14, the night Malcolm Turnbull knifed Tony Abbott. Briggs maintained he’d injured himself running, but the rumour was that he injured his back when he fell off a marble table, upon which he was dancing. Curious.

Penny Wong holds up a picture of the broken marble table

It’s later revealed pieces of the table have been spotted in other parliamentary offices, suggesting MPs are keeping them as souvenirs.

Crazy like a fox. A spy who attended a party in the home of former News of the World editor Rebekah Brooks, who has recently rejoined the fold as head of News UK, says it was quite the shindig. The occasion was a 50th birthday party for one of Brooks’ friends, and she was presented with a cake shaped like a fox — because her social set all love fox-hunting, of course. Other notes from our nosey tipster: she has a room with an entire wall of CCTV cameras, absolutely everything was beige, and she has a set of mugs that say: “I’d rather be at the Old Bailey”. The Old Bailey is significant for Brooks, of course, because it’s where she was last year cleared of charges relating to phone hacking and bribery during her time at News of the World. Making the mugs quite a conversation-starter, one would imagine …

Malcolm in the cellar? The  Gay & Lesbian Organisation of Business & Enterprise Awards were handed out in Melbourne on Friday night in recognition of the work of LGBTI Victorians. In a silent auction for the event, there were three signed bottles of wine, one from the PM, one from Victorian Premier Daniel Andrews and one from Victorian Opposition Leader Matthew Guy. Just before the auction ended Guy’s bottle had no bids, but at the very last minute, a Greens member, no less, put in a bid. How’s that for cross-party unity?

Surprisingly, the wine from the PM, which went for more than the other two, was signed by Malcolm Turnbull — not Tony Abbott — which led the host of the evening, Hannah Gadsby to comment that perhaps Turnbull had spent the months before the leadership spill locked up in a cellar signing wine bottles in preparation for the big day.

Kroger calling. Crikey attended a garden party in Melbourne on Saturday, which brought together various reprobates from the 1980s student politics Liberal/Labor club borderlands, some of whom had not seen each other in 30 years. More than one expressed the hope that Michael Kroger might show up, a longhair (i.e. resting on the collar) of the time. Alas, the afternoon wore on and the Kroger was not released to us. “What was he like?” we asked. “What sort of music did he like listen to, New Order?” “Who’s New Order?” said our interlocutor (good god), who dated the man for a year. “It was — oh, the Moody Blues! he loved the Moody Blues!” “Oh god, so he did,” someone else chimed in. “Gemini Dream!” Well, the blues are pretty moody, with Mr Tony gone.

Yay for men! Wait a second … Grace Hopper Celebration is an annual tech conference for women who work in computing to share ideas and work together towards a more level playing field in the industry. But Google celebrated its diversity using the Grace Hopper hashtag with a rather curious picture: 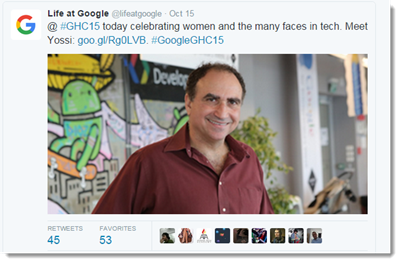 Yes, that’s a man. Twitter followers asked if Google could have “celebrated women in tech” with a picture of a woman in tech, and received this non-response.

A radical proposal in  the war on ice. The government likes to talk tough when it comes to dealing with ice addiction, often referring to its campaign as a war.  Ms Tips is not sure that the rhetoric was meant to be taken literally. In tweeting an interview with Liberal Democratic Senator David Leyonhjelm, Sky News said that Leyonhjelm suggested “demilitarisation” of ice.

While stripping Ice of its weapons might be an effective measure in fighting the scourge of Ice addiction, the good senator corrected the tweet, stating he was just, as he often is, calling for decriminalisation.

“Rebekah “I Know Nothing” Brooks – Highest Paid Tea-lady in the World”?

Is this a serious site or is it merely trying to compete with, say, “Women’s Weekly”?

AR, even people with the most mediocre education are able to write passable English, so why don’t you just try to raise your standards? Remedial courses are available.