The sense of confusion surrounding Abbott’s deployment of Australian forces to Iraq recalls an earlier episode involving Robert Menzies and the Vietnam War. 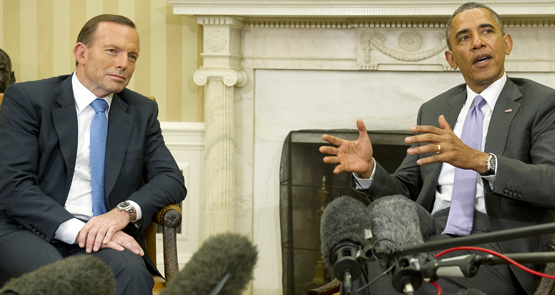 Former prime minister Tony Abbott repeatedly told federal Parliament and interviewers that he had received an official request from US President Barack Obama to send warplanes and special forces to the Middle East to fight Islamic State, aka “the death cult”.

However, the letter has never been tabled in the House of Representatives, nor has it been made public. Why not?

Such letters are important documents of state-to-state diplomacy. They are usually filed in the national archives to be used as primary sources by biographers and historians.

As part of their authentication, they must bear an official letterhead, a date and a handwritten signature. The request has no diplomatic validity if it is emailed, tweeted, communicated via Facebook or relayed in a telephone call.

Crikey has spoken to Coalition, Labor, Greens and minor party MPs; none of them have seen the Obama request. The evidence of an official request from Obama is so scant that questions have been raised by two senior political commentators, Paul Kelly (The Australian) and Peter Hartcher (The Sydney Morning Herald).

The sense of confusion surrounding Abbott’s deployment of Australian forces to fight ISIS recalls an earlier episode. National press gallery journalists with long memories will recall the fiasco surrounding prime minister Robert Menzies’ deployment of a battalion of fighting troops to Vietnam in 1965.

The story was broken in Sir Frank Packer’s Daily Telegraph on April 29, 1965, by gallery reporter John Webb. Simultaneously, it appeared in The Canberra Times under the byline of Neville Hobbs of Australian United Press, the forerunner of Australian Associated Press (AAP).

According to “Webby” who now lives in Sydney, Menzies was “livid” that his grand announcement had been plastered prematurely all over the media. In the House of Representatives he told MPs that his government was “in receipt of a request” from the embattled regime of South Vietnam, which had “turned to Australia for help”.

“Menzies lied to the house,” snapped Webb. “He was talking absolute bullshit.” When official records were released, years later, it became evident that no such request had been made by Saigon at the time of Menzies’ statement.

A bogus “request’ was hurriedly arranged behind the scenes. English-born Air Minister Peter Howson, an ardent supporter of the war, was returning from an overseas trip when he was diverted to Saigon. He met prime minister Phan Huy Quat to seek an official letter asking for an increase from “advisers” to battalion-strength “boots on the ground”.

With the letter tucked in his briefcase, Howson flew back to Canberra and gave it to Menzies.

However, Menzies’ deception was exposed with brilliant audacity by Gough Whitlam, then deputy leader of the opposition. During question time, Whitlam asked Howson whether the request had been conveyed in Vietnamese or French — the two languages spoken in Saigon but not by Howson, who was a mono-lingual Cambridge man. Howson’s response in the house was a pathetic and embarrassing mumble. Labor MPs jumped to their feet cheering and jeering, and there were calls for Howson to resign.

Official Vietnam War histories now record that the Menzies government was falling over itself to send troops to the Vietnamese battlefields, and all of its secret negotiations were with Washington, not Saigon.

Behind the scenes, Howson and his Liberal cronies were urging Harold Wilson’s Labour government in Britain to commit defence personnel and equipment to America’s “dirty, unwinnable war” but the entreaties fell on deaf ears.

Eric “EJ” Walsh, another press gallery veteran from the Sydney Daily Mirror, told Crikey this week that Saigon and Washington did not have to ask for an Australian battalion to be sent to Vietnam because the Menzies-McEwen government was “raring to go”.

He said that Abbott had taken the same attitude when committing Australian forces to fight ISIS. “If there is a written request from President Obama, I’d like to see it,” said Walsh. “Until it is produced, Abbott is entitled to the presumption of guilt.”

Webb added: “If Abbott has followed in the footsteps of Menzies, Australians have gone to war … on the basis of another Tory deceit.”

It’s now over to the press gallery or Labor’s shadow foreign affairs minister Tanya Plibersek to establish the facts.

Why would Toady lie?

No surprises! How to extract our forces is the real question.

Forget Abbott’s interviews & protestations in Parliament – if he failed to put it in writing that Obama sent a letter then there is no letter.

Let’s hope your interpretation of this issue turns out more reliable than your failure to yet understand what actually happened with the process behind the invitation for Australian troops in Viet Nam. More accurately, of course, it should have been described by you as a request to INCREASE the number, because at that point (whether you know it or not, and it has been pointed out to you previously) Australian troops were already there.

What ? Labor interested in establishing facts of a Tory decent that they totally support? Don’t wait for Tanya…