Suu Kyi, the Queen of Burma, preps for election, but demurs on Myanmar’s Muslims

Three out of four people on the street in Myanmar predict Aung San Suu Kyi will get a majority in Myanmar's upcoming election. 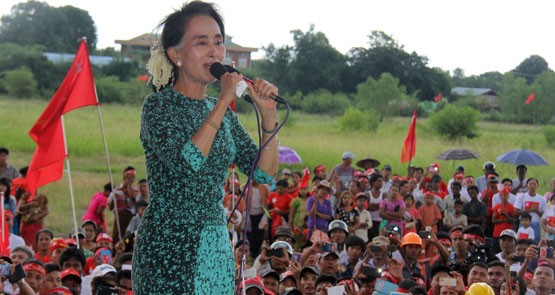 There’s a crowd of well in excess of maybe 10,000 people on a scrappy football field on the edge of Taunggok in southern Rakhine State, Myanmar. It’s a two-and-half-hour drive over bone-jarring road from the nearest airport — only 44 miles (yes, they still use miles) away. That’s about 60km for you kids.

So much, then, for the claim that the main opposition party, Nobel Peace Laureate Aung San Suu Kyi’s National League for Democracy, has next to no support in seven the ethnic states that surround the heavily populated centre. These states include the nation’s two main cities, Yangon (Rangoon) and Mandalay, as well as its freshly built capital of only five years, Naypyidaw.

The assembled throng comes decked out in NLD’s red and white T-shirts and flags, and heaps of young blokes are wearing head ties that give the gathering the whiff of a good-natured kung-fu convention.

Then the warm-up, like the crowd needs it, from an annoyingly shrill-voiced woman.

Suddenly the throng rises up as one, as behind the makeshift stage a mini-convoy of four or five SUVs hove into view. The flags are waving deliriously and it’s fever pitch.

There are a handful of not-too-mean-looking security types on the stage, which is simply adorned: a huge poster with ASSK and her father, the late General Aung San, adorned with party slogans. There are two hefty, rather grand wooden chairs, probably teak, at the back.

The nation’s most popular politician is preceded by her omnipresent right-hand woman and chief of staff, Dr Tin Mar Aung, who takes the far chair. Then comes the woman known nationwide as The Lady. She sits, smiling and waving, for all the world, the Queen of Burma, as she is introduced — like she needs it.

It’s all done with a sharp efficiency the West’s politicians would be smart to note. Then she’s up.

There is only one game in town on the campaign trail for Myanmar’s November 8 election, and here, in this remote, rather stunning riverside hill town, it arrives on Saturday — in spades.

Looking, from only about 20 metres away, like she is 55 years old, rather than the 70 she just passed, one of the most famous political prisoners of the last century is clad in traditional green silk lungi and fitted white blouse. The ever-present wisp of grey hair over the ears gives  wisdom, and lie, to the jet-black ponytail, clasped, as ever, with fresh flowers.

For the next 55 minutes, it’s just her, the microphone and her people.

She clicks straight into third gear. Schoolmarm Suu is here — sit down, please, sit down, people all need to see me. Then, to her bouncers in Burmese “tell the foreigners [that would be the media] to sit down”. Then, in don’t-mess-with-me-fellas English: “PLEASE sit down.” The heavily mascara-ed eyes stop for just long enough. Was that a glare? Like errant schoolkids, we all plonk ourselves onto the brown dirt.

Then fourth gear: apologies for being late, the road needs fixing, so, so happy to be here after 13 years, it’s been too long. She smiles, pauses, lifts the voice to a crescendo. Punchline. Delirium. Fifth and cruising. A pro at the top of her game, giving everything for the last shot in the locker.

The stump speech is a well-oiled mix of exhortations for change and better economic opportunities. All critique, no policy, the joys of opposition, who needs it?

Rakhine has many natural resources, so why is everyone so poor? she asks.

These are simple messages that hit home with just about everyone in a country that has only just emerged, eyes still blinking, from one of  the world’s most oppressive and economically destructive dictatorships — one that executed a swift coup d’etat in 1990, the last time the NLD won a general election, consigning Suu Kyi to 16-odd years of house arrest.

This time the military-backed government has rigged the constitution so she can’t become president — a position elected by a complex electoral college vote held four months after next month’s poll. The armed forces still  have 25% of the seats in the national parliament reserved for them.

Despite this — as well as more than 200 seats of 430 lower house positions being picked in the seven states where, apparently, she is not so popular — three out of four people on the street in Myanmar predict she will get a majority. But there is no official electoral polling allowed.

In recent weeks, a whispering campaign has ignited the country, super-charged, people say, by hardline/nationalist Buddhist monks. It’s been so successful — or has it? — that the first question in the audience Q&A that follows her tight 20-minute pitch is this: “If you are elected, will more Muslims come to Myanmar?” You could be in Tony Abbott’s Australia. Cheers.

The country has 50 million people officially, and of those about 90% are Buddhist, and about 3% Muslim. There are more Christians than followers of Allah, so go figure.

But Rakhine is where this message resonates most. The state is about one-third Muslim, mainly in the north. But apartheid-like conditions have been enforced following sectarian violence in 2012 that has resulted in hundreds of thousands of Muslim Rohingya forced from their homes into internal refugee camps.

Suu Kyi has been far too silent on this issue for her Western supporters, and far too vocal for the locals. Her deliberately vague comments about the majority having to live with the minority have been cast as pro-Muslim. Damned, whether she does or doesn’t.

Her answer is clear: politics and law forbid religion, as she demands the government put a halt to the campaign. More cheers.

Sparsely populated Rakhine won’t figure too much in the election, but its symbolism is important. Better-than-expected crowds here and in other states — such as Kachin and Kayah, where she has also been criticised — point to the people of Myanmar thirsting for change, even if they don’t like everything they might think comes with it.

But whether the military will let her win enough seats to insist on at least a power-sharing deal or whether this is already the subject of backroom talks is anybody’s guess right now. 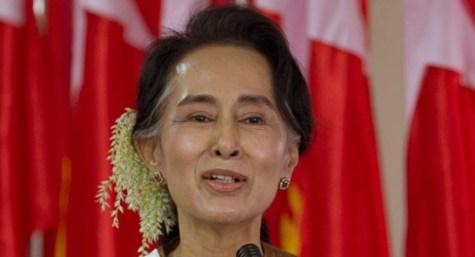 Clearly Suu Kyi and her merry band would find soul brothers and sisters in Crikey Land.

I wonder if Norman has bothered to go to Burma, I have. And I found the Burmans to be racist bastards, they hate the Indians as they call them. But of course most are Rohingyas and moslems. Suu Kyi although a hero is for me a pathetic appeaser, selling out the poor Rohingya for buddhist votes.
Rakine State should have been part of Bangladesh, most of the Roningya have been there for hundreds of years.
Burma has so many similarities with Sri Lanka where the Tamils had a kingdom in the north two thousand years ago.But the propaganda says that they only came as british tea pickers last century.
Radical buddhists are just as dangerous as radical moslems.

Is there nothing on which the grossly deluded gNormless feels unqualified to comment?
The odd thing about such self obsession is that it has not a scintilla of self awareness .

AR, my limitations re my areas of knowledge are far from small, even if by comparison with the Crikey Clique they seem extensive. By the early 60s when you were a telegramme boy I’d already held down quite a few jobs which may well be more than you ever achieved; but surely you can see that in saying that I’m setting the bar quite low?

ken svay, he hasn’t, but was following what you call “Burman” (sic) events closely before you were born. He hasn’t (in common with homo sapiens generally) been to Pluto either, but has followed that topic also.
The song suggesting “Brush up on Shakespeare” in your case would more aptly contain lyrics suggesting “Brush up on History” before attempting to preach on that subject.