This is a hands-off cruelty that sent "Abyan" back to an open prison without having received adequate medical treatment. 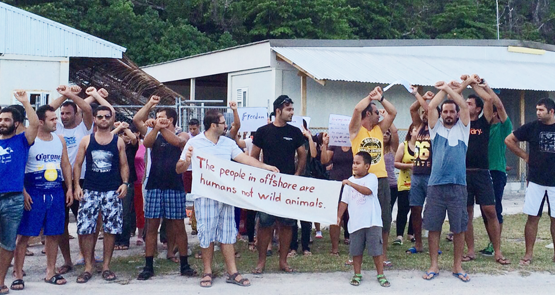 There is no aspect of Australia’s refugee policy so tragic that the actions of the government cannot give it a farcical dimension. That’s the situation with the desperately sad case of “Abyan” (not her real name), one of two Somali refugees allegedly raped in Nauru, initially denied the option of an abortion, and then flown to Australia — and barely a day later flown out again without being given advice, counselling or the possibility of a termination. This “handling” of her represents a new stage in our tortured and torturous process of handling refugees, and our use of Nauru as a dependency for our convenience. Indeed it’s a coming together of the two approaches: placeless people without a state, and any rights that might accrue from such, consigned to a place that has become stateless and subject to fiat, a shadow zone in the world order. Quite aside from anything else it represents a further transformation — and degradation — of Australian governance, of its own subjects as much as of “the others”.

The federal government claimed that Abyan had “refused” an abortion, and was thus flown back to Nauru. George Newhouse, who has begun acting for Abyan, denies this on here behalf, telling Radio National this morning that “Abyan told the nurse that she was too ill to make a decision, or to undergo any procedure, and she’d make a decision the next day”. In a handwritten note by Abyan that was photographed and texted, she said she had seen a nurse at Villawood, but no doctor, had been offered no counselling, and no interpreter had been made available.

Abyan had been so ill on Nauru — having lost 10 kilograms in the weeks before being flown out — that she had to spend two days in the island hospital before she was well enough to fly to Australia, according to Newhouse. The government used the delay as a pretext to send her back to Nauru immediately, with an emergency injunction to prevent removal being granted too late.

Immigration Minister Peter Dutton claimed that Abyan had made an affirmative decision not to have an abortion, and had seen counsellors — and that Abyan was being “used” by refugee advocates as part of a process of using medical emergencies to get refugees onto Australian soil. However, no proof of this has been produced, and both Newhouse and Abyan deny that the minister’s account of the events are accurate in any way.

The whole passage is grotesque enough in outline — flying an ill, traumatised woman across the Pacific to not have an abortion, and then returning her to an island open prison — as to make for bleak self-satire. And that appears to be the point of the whole rigmarole: rather than the disdainful and outright cruelty of the Howard era, the new approach is to use bureaucratic impersonality to make the slightest process vexatious, indifferent and harsh. It’s hands-off cruelty: no active or focused persecution, just the process itself would take someone from being merely traumatised to actively suicidal.

In that respect, the Abyan case brings together everything that our refugee policy relies on, which is exceptionality and lawlessness: refugees excluded from the rule and protection of Australian law, contained within executive state procedures, which then uses the exceptional nature of Nauru — as a post-state entity now entirely dependent on Australian support for daily life — to maintain a law-free zone where executive power can be exercised (and subcontracted) unimpeded. The third part of this exceptionality is abortion, which hangs suspended in between legality and illegality in most Australian states, bridged by official state processes — including mandatory counselling, which Abyan appears to have been denied.

The cynical use of territoriality — that Abyan can be treated as a prisoner of the Australian state, but denied any of its legal protections, such as habeas corpus, the moment the plane carrying her leaves national airspace — has been a feature of handling the refugee issue since the “Pacific Solution” was inaugurated in 2001, with the arrival of the container ship Tampa at Christmas Island carrying more than 100 refugees who had been saved from drowning. Their transport to Nauru frustrated a habeas corpus appeal, simply establishing executive power over judicial power — starting us on the road to our current situation in which executive power has broken free of limiting by the other separated powers.

The use of Nauru was essential to this process. The former Australian colony with a population of 10,000 was, by 2000, in dire straits, the huge payout for the huge destruction of the place (through phosphate mining) all but gone through mismanagement, excessive payouts and corruption. The country lacks sufficient water supply for its existing population, relying on seawater purification, and the plant for this is maintained only by Australian payments. The population is ravaged by ill health, especially diabetes and kidney failure, arising from the encounter between a Pacific people and a Western diet, and many of them have to be regularly flown to Australia for dialysis, at considerable expense.

The island’s desperate circumstances are thus a product of history and the difficulties of post-colonialism — and we have used that predicament ruthlessly as a way of recolonising in a manner that is some ways worse than the original episode. Over the decade-and-a-half of explicit dependency, the country’s politics have become corrupted by cronyism and illegality, the exclusion and sacking of its own chief justice, and the blatant disregard of its constitution by its sitting MPs. Nauru has been subject to processes that — in other places, such as Fiji — led us to impose legal sanctions and suspension from the Commonwealth. In Nauru, the dominance by the Australian government and its private subcontractors has been done with the explicit aim of letting Nauruan civil society hollow itself out, so that it will be purely subject to our will by compliant leaders.

The result is an entity that marks a new development in the process of creating a global class of stateless people, stripped of citizenship and rights, and subject to executive fiat. As Jeff Sparrow noted in The Guardian, the process of transporting Abyan back and forth on an RAAF jet is a form of extraordinary rendition widened in its application from people whose politics are suspect, to those whose very existence counts as a political problem. Nauru is the counterpart to this, a non-state that has more in common with ad-hoc entities such as Northern Cyprus or Transnistria than it does with actual states. In that zone, anything is possible — and that principle can be expanded in all directions. Nauru’s shadow character makes this process of transport and rendition of stateless refugees a routine matter.

The dependency of Nauru, its special character, is also essential to the final part of the equation — that Abyan and others can be subject to all the executive controls of state power, but none of the rights and protections rising from it. That allow for an ever-narrower conception of those rights, as applied to everyone, Australian citizens included, as, in the public mind, state power and executive power become identical. This also allows the “freedom-loving” right to abandon her and all like her — you’ll see nothing about this case on the IPA’s website, though there is a paean to Magna Carta, “the tax revolt that gave us freedom” like, er, habeas corpus. Bitterly ironic, really: before Abyan, the most famous Somali refugee who had got out of the country through non-official channels was Ayaan Hirsi Ali, who they seem to have a lot of time for.

How will this practice end? If actual murder on Manus Island did not call a halt to it, what will? The “M68” case currently before the High Court is petitioning on behalf of Nauru-based refugees to argue that the whole practice is contrary to the government’s constitutionally detailed executive powers. If that were to succeed the process would be thrown into some chaos. But it will need a stronger pushback than that in the Turnbull era, whose nominally liberal character can be held to account. No one, one presumes, has any illusions that the refugee regime would change. But once you claim a liberal heritage (rather than Abbott’s simple, reactionary exclusionism), your implicit claims can be held to account, and the politics of it may well start to turn on that when after the farce, there is, inevitably, more tragedy.

For the Brits, here’s the world according to Tony Abbott

How will this practice end? IF ACTUAL MURDER ON MANUS ISLAND DID NOT CALL A HALT TO IT, WHAT WILL?

My name is Graeme Alan Bull . . . and I, WILL NOT BE A PARTY TO THE ACTIONS OF THIS AUSTRALIAN FEDERAL GOVERNMENT’S INHUMANE ABUSE OF REFUGEES!

How would you know what’s going on under CONTROL agent Dutton’s “Drone of Silence” – with only Homer’s version of reality … with his record?

Let’s recall how Australians jacked up over Bronwyn Bishop’s $5000 helicopter flight, it revved up the nation.

But it appears we are prepared to accept exorbitant costs for an RAAF jet as long as punishment doesn’t abate for ‘an illegal’ (LNP terminology) who once sought refuge.

One wonders how many detainees on Manus & Nauru now wish they had drowned instead.

You are approaching the limits of hyperbole Guy. Next you’ll be risking breaking Godwin’s law.

What is the meaning of the word . . intolerable!

“Unable to be endured”