Is Chris Bowen about to lose his seat? 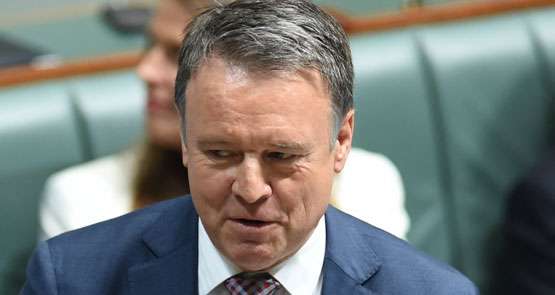 Not for the first time in recent years, the Hunter region of New South Wales finds itself at the centre of a political earth tremor with far-reaching consequences for both major parties.

This time the cause is a redistribution of the state’s federal electoral boundaries — a less dramatic circumstance than the campaign finance scandals that cut a swathe the region’s state parliamentary ranks a year ago, but of no lesser consequence to the MPs concerned for that.

Charged with reducing the state’s existing 48 seats in the House of Representatives to 47, the redistribution committee announced on Friday that it wished to apply the scalpel to Joel Fitzgibbon’s seat of Hunter, which has existed in one form or another since Federation. Most of its voters would be transferred to the outer Newcastle seat of Charlton, which will take on the Hunter name.

Fitzgibbon came to the Hunter electorate in 1996 succeeding his father, Eric Fitzgibbon, and put his pedigree to good use over the years in building up a substantial power base in the NSW right.

By contrast, Charlton is held by Labor’s Pat Conroy, who is new to Parliament after succeeding Greg Combet as member in 2013, and a rising figure on the left. So long as Fitzgibbon is committed to remaining in politics — and he’s still only 53 — neither he nor Conroy look like obvious contenders to be left without a seat when the music stops.

Someone who fits the bill rather better is Jill Hall, who has held the neighbouring southern Newcastle seat of Shortland through a fairly low-profile 17-year career, and will be just short of 67 by the time of the next election.

So long as the implications for gender balance can be finessed, a clear path to resolving the issue would be for Hall make way for Conroy in Shortland, which stands to gain the Cardiff area and its 18,000 voters from Conroy’s electorate in the redistribution.

However, a Fairfax report suggests that the locally dominant left might have a grander design that would involve Fitzgibbon taking on the consolation prize of Paterson, a currently rural and Liberal-held seat that is set to move into Labor-voting urban territory around Maitland.

With suggestions that Liberal incumbent Bob Baldwin is to retire at the election, Fitzgibbon would most likely be able to win Paterson at the election, leaving Shortland free for a woman of the left, be it Jill Hall or a newcomer.

Sydney’s proposed contribution to the redistribution belt-tightening is the cession of Camden and its 45,000 voters to the semi-rural seat of Hume, with important knock-on effects to be felt throughout southern Sydney.

One big name who will do very badly out of this process is shadow treasurer Chris Bowen, who retained a 5.3% margin in his western Sydney seat at the apparent low-water mark for Labor of the 2013 election. Now he looks set to have the Vietnamese hub of Fairfield stripped from the electorate, cutting the margin back to little more than 2% — potentially enough to put him in danger, if Prime Minister Malcolm Turnbull’s strong early polling numbers from New South Wales are maintained.

An even bigger loser, albeit a lower-profile one, is Nick Varvaris, who gave the Liberals one of their best results of the 2013 election by winning the seat of Barton for the party for the first time since 1980. The redistribution proposal makes the seat almost impossible for Varvaris to retain, stripping it of the Liberal-voting Sans Souci area on the shore of Botany Bay, and compensating it with Green-left territory around Marrickville in the inner west.

For the redistribution losers, hope isn’t entirely lost — there now follows a period where objections are received, and the last redistribution in Victoria demonstrated that this process is not merely window dressing.

There is much in the proposal that seems sure to draw a hostile response, particularly in the Nationals-held seats to the north of the Hunter region.

In seeking to spread the butter more thinly along the northern coast, the redistribution strains to include both Port Macquarie and Coffs Harbour in the seat of Cowper, leaving both cities cut off from smaller centres on their periphery.

There is also a strange-looking proposal for the ever-popular seat of Eden-Monaro, which takes a bite out of its coastal territory around Batemans Bay and adds rural areas west of the Snowy Mountains, with which the electorate has little historic connection (presumably it’s just a coincidence that this would strengthening the seat’s cherished bellwether credentials, as it turns a too-narrow Liberal margin of 0.6% into a nationally representative one of around 3%).

However it is that such matters are finally resolved, the Australian Electoral Commission has set the concluding date for the process at February 25.

With that done, the Turnbull government will be past one of the main procedural hurdles to calling an election, leaving it weigh up the alternatives of a double dissolution in the first half of the year, or a normal election for the House of Representatives and half the Senate in the second half.

That “Green-left territory around Marrickville” going to Barton is being carved out of Albo’s Grayndler – the strongest Labor voting bit of his electorate. He’s now got to win over Liberal Drummoyne and Liberal-Greens Balmain. Considering the skinny margin he was on (this was a nominal Lab vs Grn seat), that’s all going to get very interesting…

Grayndler may get rather interesting. The Greens did awfully around Balmain in the last federal election but on the other hand went amazing well there in the last state election, an example of this would be In the Birchgrove booth where the Greens achieved 14.9% in 2013 but in 2015 they increased their vote to 35.6%.
The other interesting addition being Drummoyne could make this a three horse race on primary votes, i feel that the Greens have never really tried in and around Drummoyne therefore if they could increase their vote from around 10% to maybe 15% – 17% they could make Albo sweat a bit.

Fitzgibbon is awful but Labor will make sure he is in a winnable seat, probably Paterson due to it now containing Maitland.

Albo has been taken to preferences, to barely beat the Greens, in every election he has contested.
Unlike Jeanette McHugh or even the appalling placeman Leaping Leo who continued Fred Daley’s hold since Federation.(OK, maybe Fred wasn’t a hundred years old but it seemed that way.)

AA is a backroom thug,happy to be the kingmaker without exposing his spineless back to the maaaates’ knives.